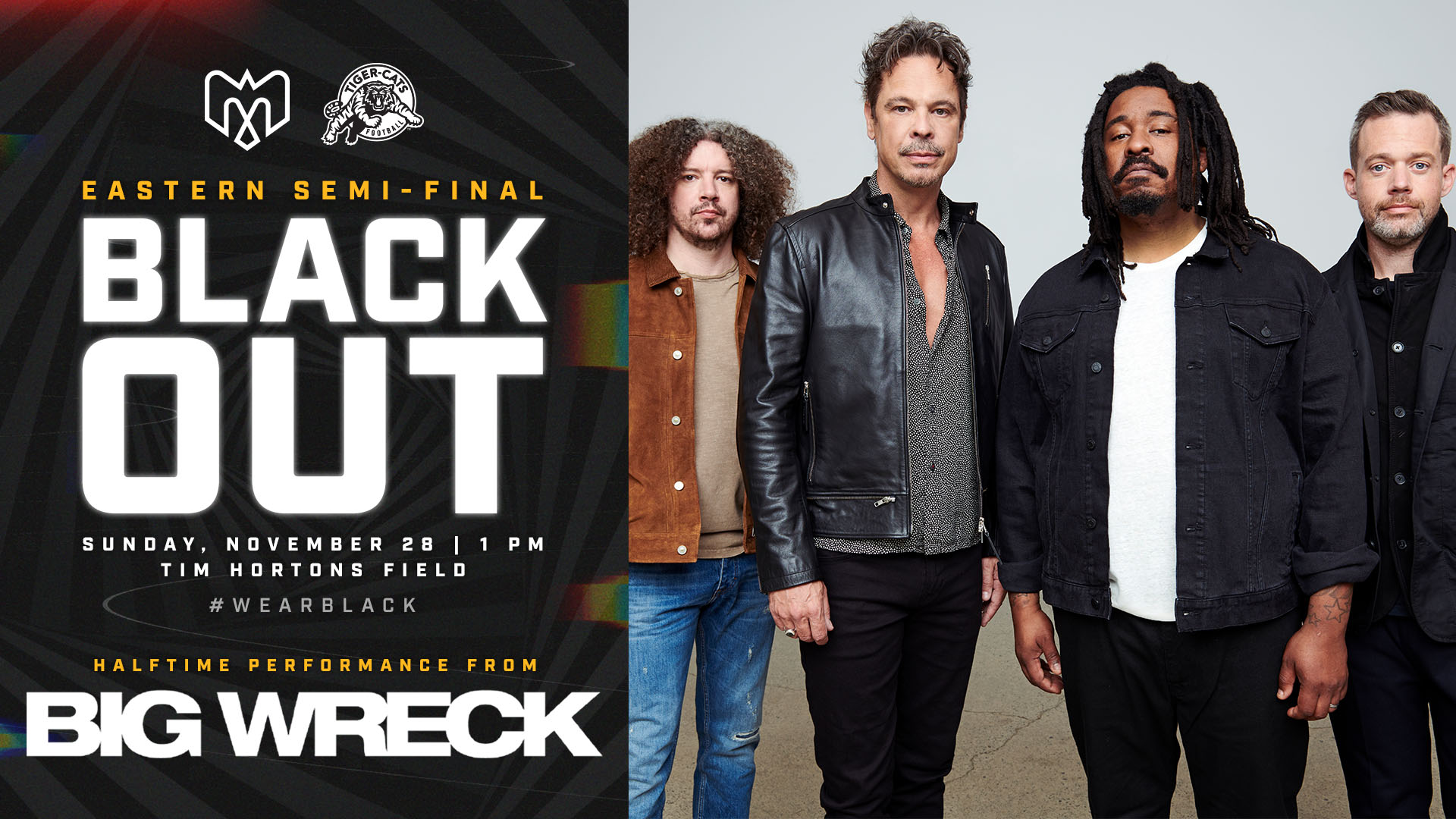 The Hamilton Tiger-Cats announced Thursday that Canadian rock phenom, Big Wreck, will be taking to the halftime stage at Tim Hortons Field at Sunday’s (November 28) Eastern Semi-Final game. Kick-off is at 1 p.m. versus the Montreal Alouettes, with the winner advancing to the Eastern Final in Toronto on Sunday, December 5.

Less than 3,000 tickets remain for the game. Seats can be secured via ticats.ca/tickets, tickets@ticats.ca or by calling 905-547-2287. The popular fan ‘blackout’ is in effect Sunday at Tim Hortons Field. Ticats fans are encouraged to arrive to the game early wearing black from head-to-toe to support the players who will be wearing black jerseys and black pants to add to the fan experience and home field advantage.

Formed in in the mid-‘90s, Big Wreck remain one of the highest regarded rock bands in Canada with dozens of radio anthems, platinum albums, and millions of tickets sold. Recently the beloved band – now consisting of Ian Thornley (vocals, guitar), Dave McMillan (bass), Chris Caddell (guitar) and Sekou Lumumba (drums) – released Big Wreck: 7.1, the first EP of what will be an immersive three-volume collection. A wealth of riches for the Big Wreck faithful and new fans alike; the first installment of the triad encapsulates the raw, anthemic rock of Big Wreck’s inaugural LPs – 1997’s In Loving Memory of… and 2001’s The Pleasure and the Greed – and edgy eclecticism of their more recent offerings since reforming in 2012, including 2019’s dynamic …But for the Sun.

Alongside the thundering Top 40 Canadian radio single “Bombs Away”, which landed on marquee playlists like Apple Music’s New in Rock, Spotify’s Ready to Rock and Amazon’s Fresh Rock, Big Wreck: 7.1 features the beautifully orchestrated focus track “Fields”, which garnered playlist love from Spotify’s New Music Friday Canada and All New Rock, the absolutely smoking and masterful “High on the Hog” which gives the entire band a chance to flex their chops and serves as an earnest reminder of Thornley’s impressive range and impactful prowess as a vocalist, the epic melodic call and response driven “If All Else Fails” and the fuzzy distortion-rich “Beano”.