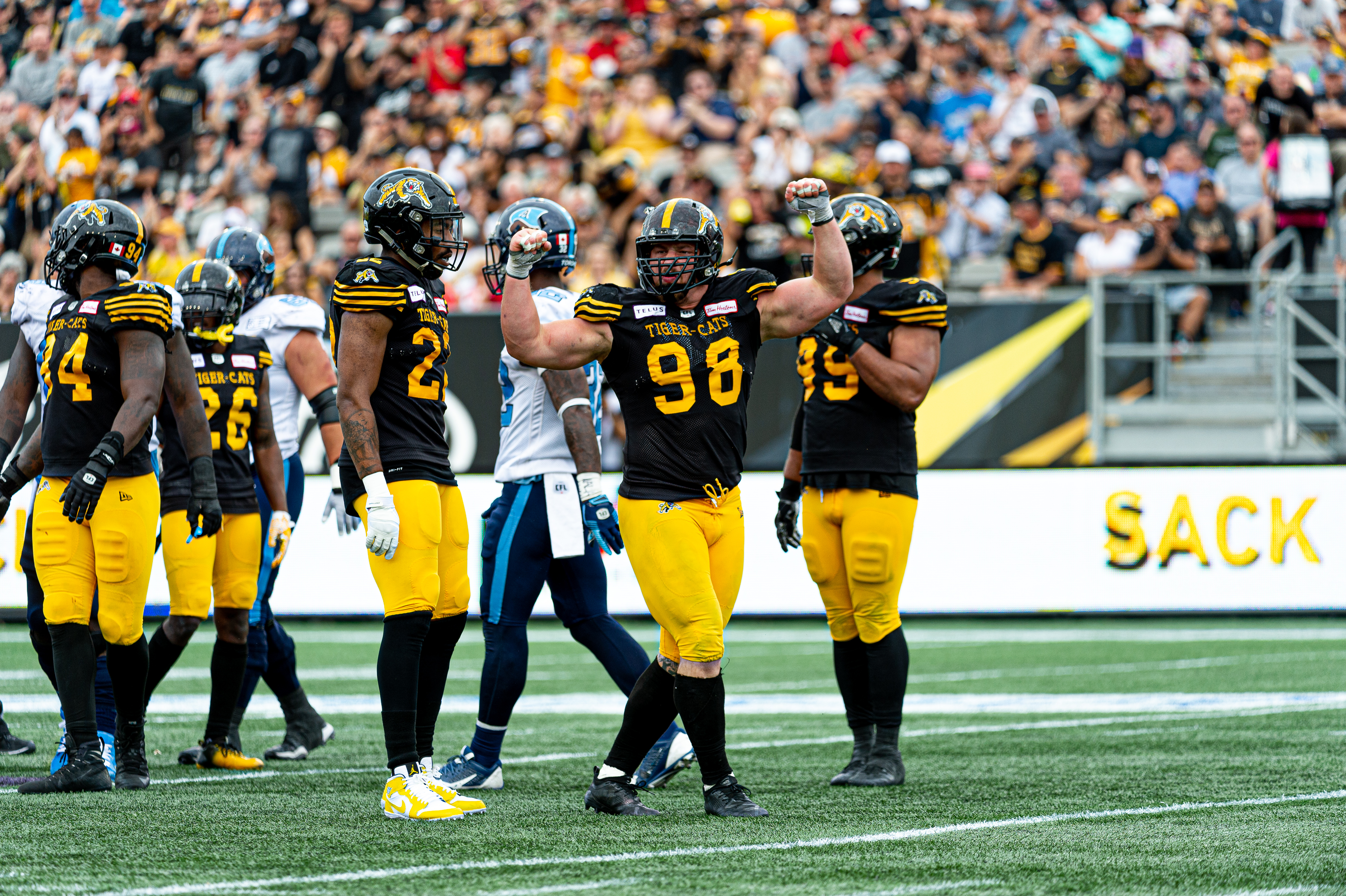 HAMILTON —  The Hamilton Tiger-Cats erased a 13-point halftime deficit in a furious second half comeback to top the Toronto Argonauts 38-27 in on Labour Day Monday at Tim Hortons Field.

After a first half controlled by Toronto, a short-handed Hamilton defence and a re-focused offence caught fire in the second half with QB Dane Evans and WR Bralon Addison leading the way.  Evans completed 83 per cent of his passes for 442 yards and two majors.  Both TD passes landed in the arms of Addison who had 190 yards from scrimmage.

Ontario’s helping of Mark’s Labour Day weekend didn’t disappoint with no shortage of bad blood between two of the oldest franchises in sports.  An Argos first half which included 203 yards receiving and two touchdowns along with four turnovers and seven sacks went for not as they once again won the turnover battle but didn’t outlast their opponent for the second straight week.

These two rivals entered the annual matchup on complete opposite ends of the East Division standings but history has proven time and again that the records are meaningless when it comes to the Labour Day Classic.

The most recent example came two years ago when an 0-8 Ticats squad upset the eventual Grey Cup champion Argonauts. 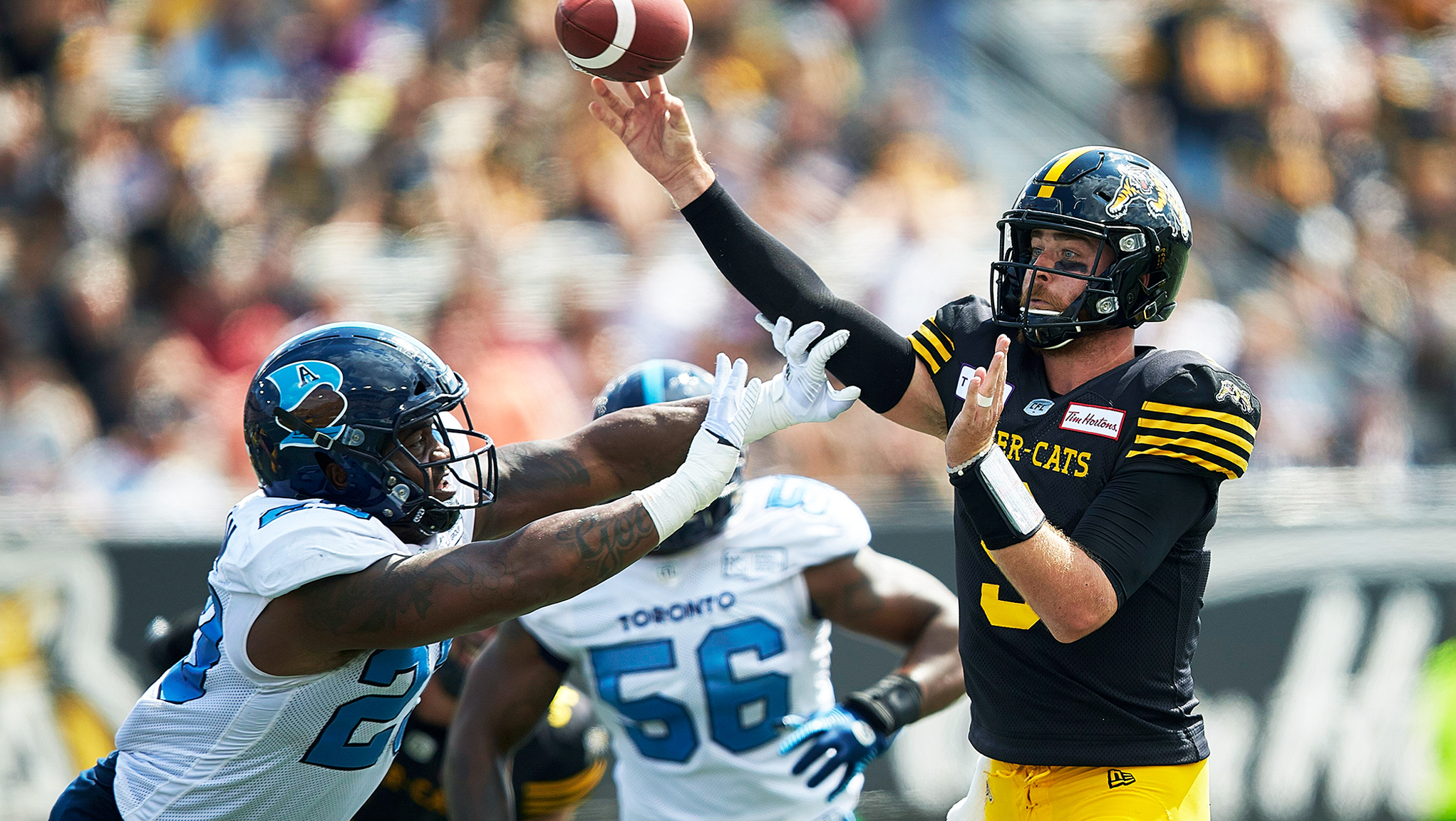 In front of a sold-out Tim Hortons Field crowd, Evans wasted little time getting the hometown faithful into the game, leading a six-play touchdown drive which he capped off himself with a 10-yard touchdown scamper off play action.  Evans would complete a pass to Brandon Banks for the two-point conversion to take an 8-0 lead.

Before the gathering had time to take their seats once again, the Argos put a hush over the stadium.  McLeod Bethel-Thompson dropped back for his first play from scrimmage and dropped a pass into the mitts of Derel Walker who beat DB Frankie Williams on a stop and go route down the wide-side of the field.  Walker reeled in the pass and took it 96-yards untouched for the major.  That, combined with a single on the ensuing kickoff tied the game at 8 early on.

Despite mustering only won win, Bethel-Thompson seems to have found his footing in recent weeks.  Going 1-2 of late, he entered Monday having thrown over 1,000 yards and seven touchdowns in the last three games with no interceptions thrown.

As the Argos took their second possession of the game, Labour Day officially got underway in the way of a scuffle which led to two ejections – Hamilton’s Frankie Williams and Tunde Adeleke – and a net 25-yard gain in penalties for the Argonauts.

Once the dust settled, the Argos took an 11-8 lead off a 40-yard Tyler Crapigna field goal.

The teams traded turnovers inside Hamilton territory as the first quarter closed before the Argos would add another field goal to their tally.  A 38-yard Crapigna field goal was set up by a 34-yard reception from Walker to give the Argonauts a 14-8 lead with 11:38 left in the second quarter.

The ‘Cats answered with a field goal of their own, from 39 yards out, to bring them back within three points.

The Argonauts took over with just over seven minutes remaining in the half and Bethel-Thompson and Walker once again connected for a highlight reel major.  After MBT found Chris Rainey and Rodney Smith for first downs, he aired it out once again for Walker who hauled in a 24-yard touchdown pass and toe tapped into the end zone to give the Boatmen a 10-point lead.

That major ignited an already stout Argonauts defence which forced turnovers on its next three possessions – one on downs, one by fumble and one by interception.  The Argos could only muster three points off the turnovers however, taking a 24-11 lead to halftime.

A Ticats offence took the field in the second half looking to clean up some protection issues after surrendering four QB sacks.  They went to the short passing game to begin the third quarter which netted them a 46-yard field goal to cut the lead to 10.

With the offence picking up tread, Addison took over, snagging a pair of passes, both for over 15 yards to set up a touchdown which he took on a swing pass into the flat, made a would-be tackler miss and turn straight ahead for a five yard score.

The major cut the Argonauts lead to just three.

Toronto closed out the third with a field goal to earn a bit of breathing room after a furious quarter by the Ticats.

Addison continued to post big gains in the Ticats passing game, getting them deep into Argos territory once again.  Without Cameron Marshall, Hamilton turned to a running back-by-committee approach and as the fourth quarter began, it was Jackson Bennett’s turn to take the rock.

The former DB took a handoff and ran through the teeth of the Argos defence, scampering 25 yards for the touchdown and restoring the Hamilton lead for the first time since the opening drive of the game.

The Ticats defence dialed up a number of stops, limiting what was once a hot Argos offence in the first half.  It set up Evans for another long scoring drive, including a 35-yard completion to receiver Marcus Tucker.  Two plays later, Evans found Addison once again on a crossing route for a 17-yard touchdown.

With a 1:22 remaining, the Ticats put the game on ice, extending the lead to 11 with a field goal to cap a clock-killing drive.