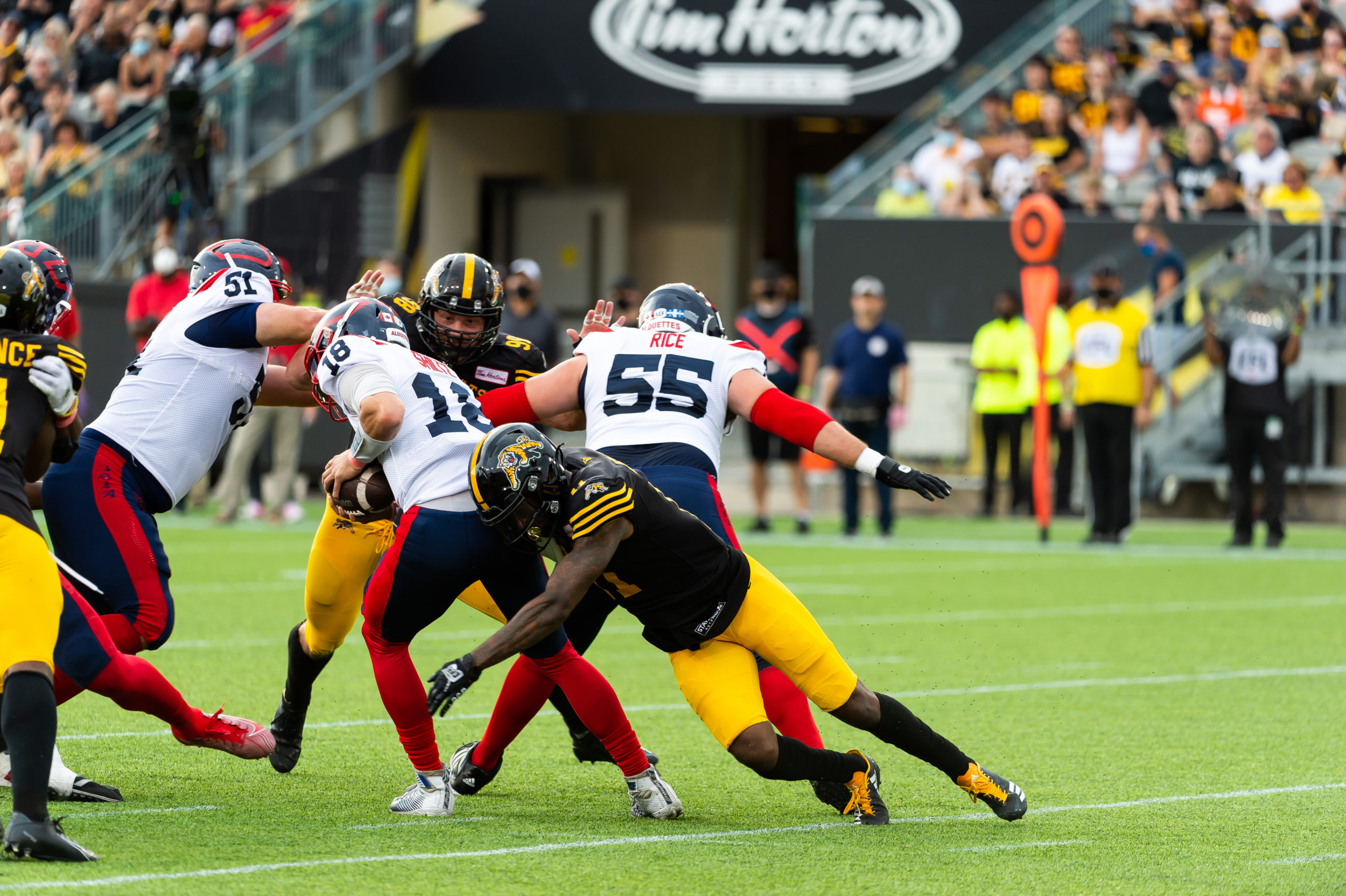 News
HAMILTON FALLS TO THE ALOUETTES IN A DRAMATIC OT FINISH
October 2, 2021

HAMILTON — Vernon Adams Jr. has staged his share of comeback wins in his CFL career. He may have had his best one yet on Saturday in Hamilton.

Adams overcame a first-quarter ankle injury and a 17-3 deficit to end his team’s two-game losing streak, with an incredible late fourth-quarter drive to give the Alouettes a 23-20 win. The win spoiled the return of Hamilton Tiger-Cats QB Jeremiah Masoli and receivers Brandon Banks and Bralon Addison, who had all been injured.

RELATED
» Through the Lens: Alouettes at Ticats
» Boxscore: Alouettes, Ticats by the numbers
» Watch: Masoli drops dime to Dunbar, sets up TD 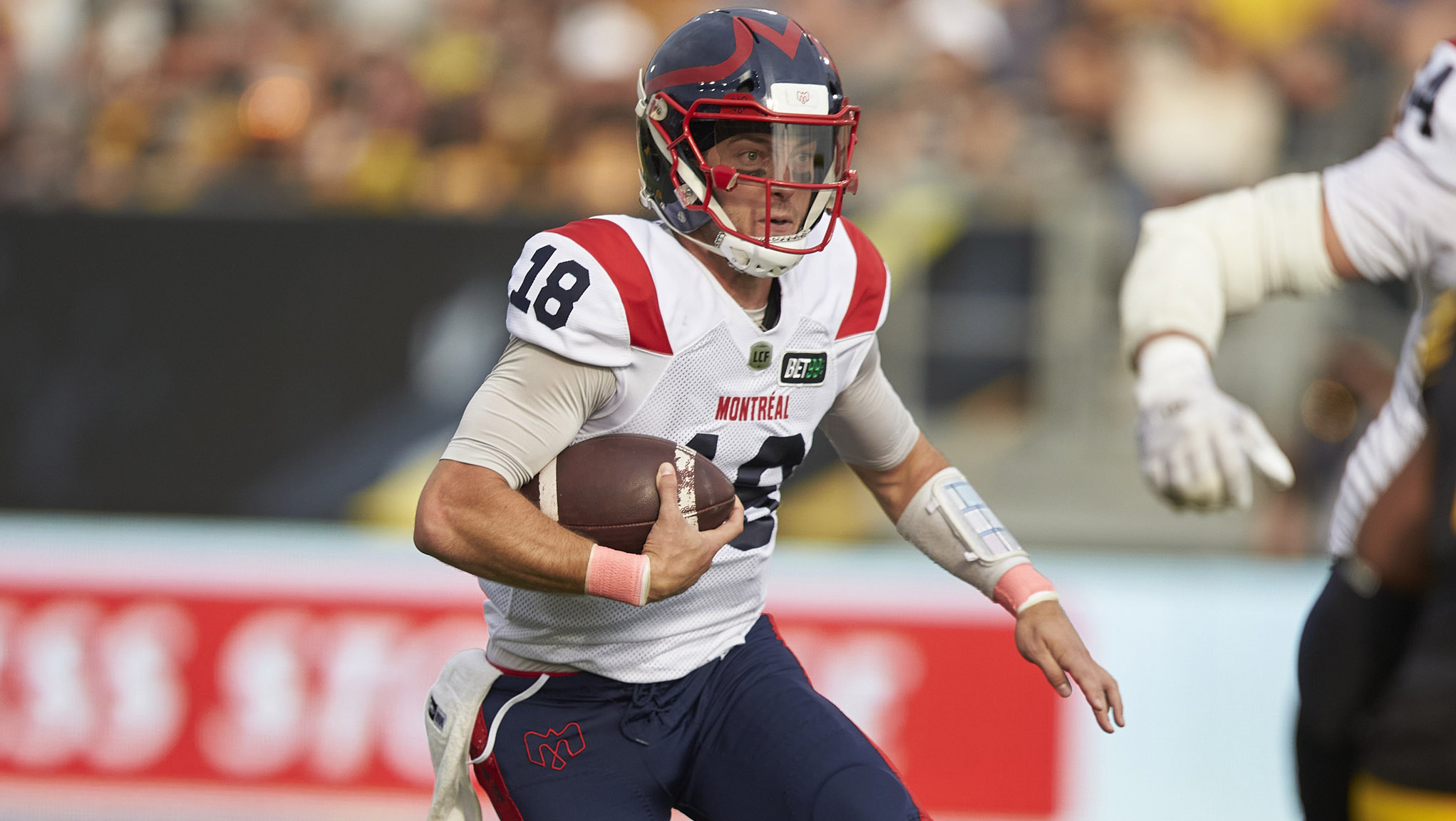 THE ALOUETTES HAD TO TURN TO BACKUP MATT SHILTZ EARLY IN THEIR GAME ON SATURDAY IN HAMILTON, AFTER VERNON ADAMS JR. INJURED HIS ANKLE (GEOFF ROBINS/CFL.CA)

The Alouettes lost the ball on their first punt return of the day, with Hamilton taking over at the Montreal 46-yard line. Montreal dodged a bullet on the ensuing drive, as Ticats’ kicker Taylor Bertolet missed a 47-yard field goal attempt, keeping the game scoreless thanks to Greg Reid returning the miss out of the end zone.

The Als ran into more trouble with just over four minutes left in the first quarter, when Adams suffered an ankle injury while he was scrambling on second down. The Alouettes’ starting quarterback walked gingerly off of the field after the play, got treatment for his injury and was subsequently ruled out for the day.

The Ticats looked to Bertolet again to close out the first quarter, with a promising drive stopped at the Alouettes’ 24-yard line. He sent a 31-yard field goal through the uprights to break the scoreless tie and give Hamilton a 3-0 lead.

Backup QB Matt Shiltz was handed the keys to the Montreal offence and while he was able to get the team to Hamilton’s six-yard line, they had to settle for a David Cote 13-yard field goal that tied the game 3-3 at 8:04 of the second quarter.

Masoli appeared to put a touchdown on the board, but Ticats’ receiver Tim White was flagged for offensive pass interference when the Als challenged the score. While the play came back, Masoli continued to push offensively and got the Ticats inside the Montreal red zone with under two minutes to play in the half. That drive led to Bertolet’s second field goal of the game, this one from 26 yards to put Hamilton up 6-3 at 13:38 of the half.

Shiltz got the Als to Hamilton’s 35-yard line, but watched as Cote missed from 42 yards out, keeping the team stuck at three points as it went into halftime.

The Ticats took control of the game in the third quarter. After Bertolet connected from 37 yards out to go up 9-3, Masoli finally found the end zone at the six-minute mark of the third quarter. The QB handed off to Sean Thomas-Erlington from 13 yards out. The running back lost the ball on his way across the goal line but managed to land on it in the end zone for the score.

The Ticats got the two-point convert, after Masoli’s pass bounced off of a Montreal defender’s hands and into the hands of his target, Addison. The less-than-pretty sequence saw the Ticats come out of it with a 17-3 edge.

Adams seemed to get more comfortable physically as the quarter moved along, running fluidly when he rolled out of the pocket looking for his receivers. While his ankle seemed to be holding up, Adams made a play he’d instantly want back when threw an interception to Ticats’ DB Cariel Brooks, snuffing out what could have been a much-needed touchdown.

Adams would get another shot at that TD and made sure he didn’t miss. Alouettes’ d-lineman Woody Baron forced a fumble on Adison that was recovered at Hamilton’s 26-yard line. After he was almost intercepted by DB Desmond Lawrence, Adams looked to Jake Wieneke in the end zone and hit him with a perfect pass at 1:48 of the fourth quarter. Cote’s convert made it a 17-10 game.

Cote would make it 10 unanswered Alouettes points with a 3o-yard field goal at 5:57 of the fourth.

When they got the ball back, they embarked on a long, 11-play drive that saw Adams work up to Hamilton’s 26-yard line. Adams was thinking touchdown, but former Alouette Ciante Evans had other plans, picking off Adams near the goal line.

With possession inside the final minute of the game, the Alouettes went on a wild drive that saw them convert twice on third down, with Adams finding Eugene Lewis on third-and-20 for the go-ahead touchdown.

The game appeared to be over, before Bertolet teed up a 55-yard field goal at the end of regulation and put just enough on it to tie the game and send it to overtime.

In the extra frame, the Ticats lost the ball on a Masoli handoff to Thomas-Erlington, with the Alouettes recovering. Cote lined up a 36-yard field goal attempt and put it through for the dramatic Montreal win.

Both teams play next on Thanksgiving Monday. The Alouettes will see the Ottawa REDBLACKS, while the Ticats will face the Toronto Argonauts.