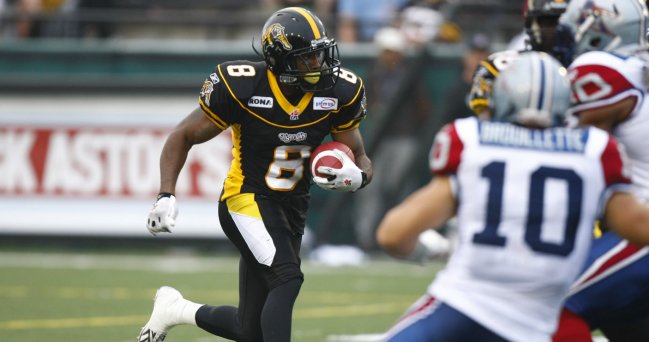 Hamilton’s dangerous return man, Marcus Thigpen has found his return magic after a slow start to the season.
Against B.C. last Friday Thigpen had five punt returns for 80 yards and another five kickoff returns for 86 yards, after exploding the week before versus Saskatchewan.

“The first few games I was really lined up wrong. I took it upon myself to scoot up closer so I can field every ball,” he said.

Number eight hasn’t made a dent in his prediction of eight return touchdowns for the 2011 season, but he envisions finding some holes against what has been some porous Montreal coverage units so far this season.

“We’ve seen that they’ve been having some problems in that area. Other teams have blocked it pretty well, on top of them not covering in their lanes like they’re supposed to,” Thigpen said. “I think there’s some seams. They’ve definitely got some holes that we can hit, we just have to block it up right.”

Expect Thigpen to be ready and hit the open lanes full speed ahead on Friday.

Ticats Kevin Glenn knows his teammates best and he knows that his boisterous running back will be very active with his mouth when Montreal and Hamilton take the field to warm up in advance of kickoff on Friday night.

“Everybody knows that Avon is the guy that likes to talk during pre-game,” Glenn admitted. “I’m anxious to see what he has to say about his ex-teammates.”

To his credit Cobourne has spoken like a true professional all week when talking about his former team. But when he gets padded up and into game-mode on Friday evening you can bet his linguistic display, on the field, will match his heightened intensity and razor sharp focus.

“It’s kind of like guys on the basketball court, when you’re at it you talk stuff back and forth,” Glenn said. “So I’m just anxious to see some of the comments that are made, it should be a treat.”

Game Within The Game: Protégé vs Mentor

Alouettes running back Brandon Whitaker, who currently leads the CFL in yards from scrimmage with 484, has made a name for himself in his first year as a starter after spending two seasons as Avon Cobourne’s backup in Montreal – learning from the 2009 Grey Cup MVP.

Of course Cobourne brought his talents to TigerTown in the off-season, which opened the door for Whitaker to show his abilities as an every down back.

Whitaker sits second in the league in rushing with 313 yards and one score. Right behind him is Cobourne, his teacher, with 264 yards on the ground and two majors.

The brotherly competition will play out on the field Friday night, where Cobourne hopes to come out with the upper hand.

“I don’t want him to out-rush me, he can if they lose, but if it’s between me and him and whoever has more yards wins the game, I definitely want me to win that battle,” Cobourne, the six-year CFL veteran, said.

Time of possession will be a key component towards a win on Friday, both backs will be vying to tote the rock and keep the other offence on the bench as much as possible.

Ticats offensive lineman Marwan Hage has again reached out to help under privileged children before, most of his community work is done in the Hamilton area, but Hage has extended his reach this time around.

On Friday night 40 minor football players, from Montreal’s Sun Youth Organization, will be in attendance to watch the Tiger-Cats take on the Alouettes.

“The reason I do it is to give them experience, life experience, they travel as a team and check into the hotel and pack their bags and see a pro team play,” Hage said.

Via Rail and Hillfield Strathallan College stepped up and provided transportation from Montreal to Hamilton.

“Sun Youth is similar to what ‘City Kids’ is here in Hamilton,” Hage said. “It’s part of Hages Heroes. I always help out here in the city of Hamilton and I never really do much back home, this is where my background is, I’m a Montreal boy.”

The Sun Youth program is near and dear to Hage’s heart.

“I did play for Sun Youth for a long time, so it does mean a lot to me to have them there,” he said. “Maybe one day, I’m sure some of these guys will become pros because it’s a pretty good program they’ve got going on there.”

One of Hage’s coaches with the Sun Youth program, as a youngster, is still a part of the 29-year olds life.

“My coach there Earl De Laperralle, is still kind of my coach now. He’s a person that has mentored me through life on and off the field,” he said. “We still talk and when I’m in Montreal we’re having lunch twice a week, he’s like a father figure to me. He’s helped me a lot in life. Just dealing and learning about life and growing up, I was a young kid there and I become a man under his tutelage.”

“Their nucleus is still there and they’ve been together for so long, so they know each other. They know how to feed off of each other, they know how to play together, they got some good athletes over there. Some good guys who have shown that they can play in big games and can come out and play every down, every day.”

“They catch the ball well. They’re very efficient, no penalties. They play a smart game, they don’t beat themselves and they have Calvillo back there which always helps. He knows his first read as soon as the ball is snapped, if it’s not open he goes through his progression. They use the running back a lot as a check down. You get so worried about the receivers and Calvillo throwing downfield and you somewhat forget about the little running back. Whitaker might turn a two-yard catch into 20 yards.” 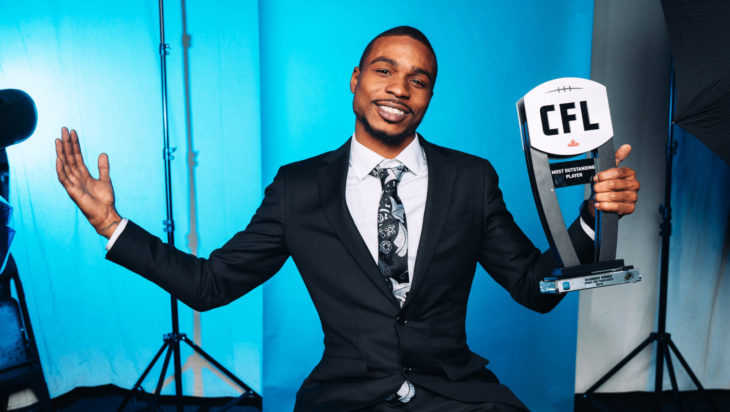