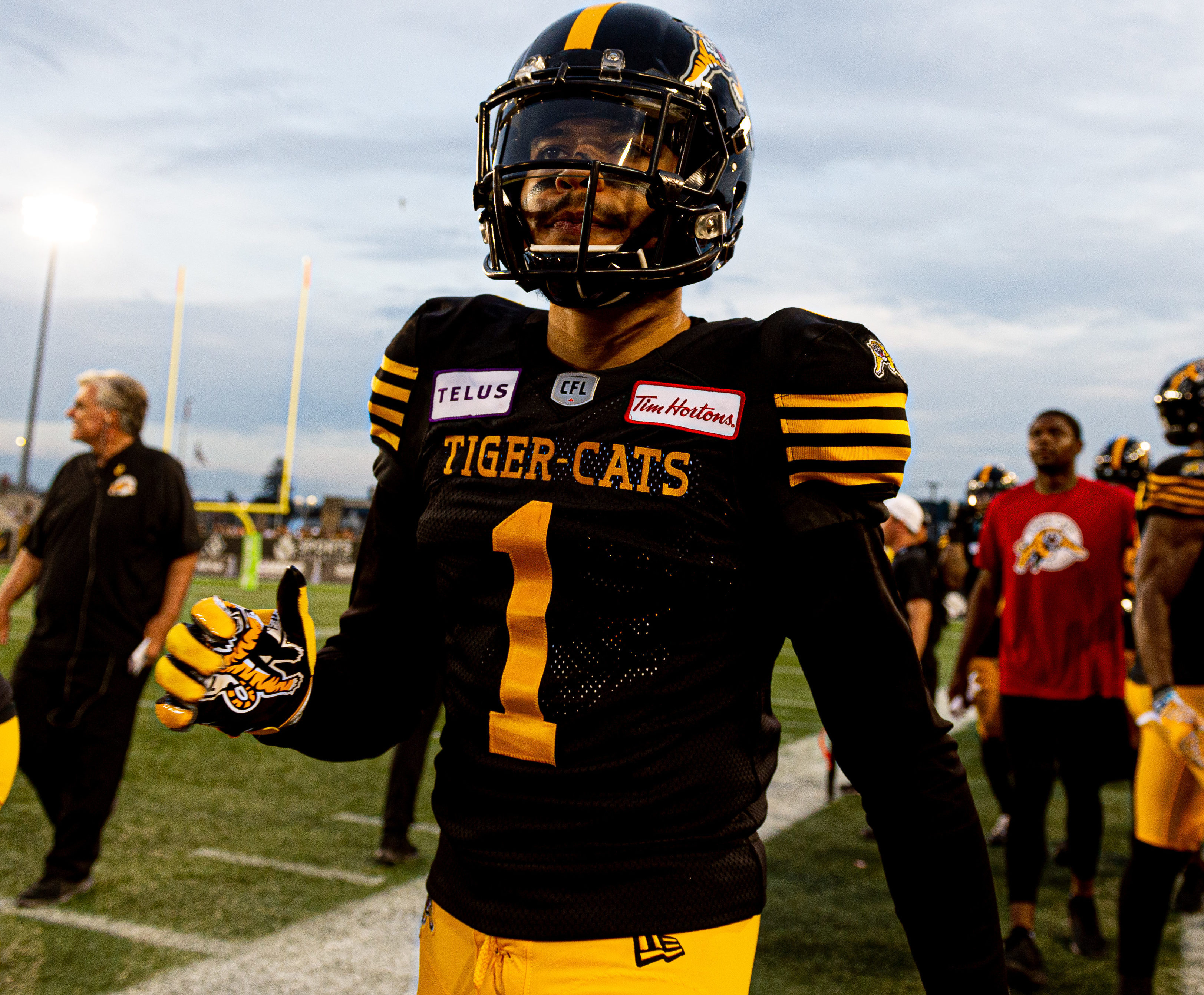 There is an irony at play here even if it is one that Anthony Coombs doesn’t much care for.

The injury-pestered receiver, perhaps soon to be returned to the running back position where he once excelled, is primed to get a heavier workload from the Hamilton Ticats due to something that kept him from keeping a heavy workload with his former team, the Toronto Argonauts.

That something is the injury bug.

“You don’t want anybody going down, especially a guy like STE,” says Coombs of teammate Sean Thomas Erlington, the emerging star running back for the Ticats in 2019.

Thomas Erlington – who was enjoying a sensational breakthrough during the early portion of this season – now knows the frustration and pain that Coombs has been all too familiar with during his own career. The pain comes from the injury itself. The frustration? From having great performances and blossoming promise stymied by time on the injured list.

With Thomas Erlington on the six-game, Coombs now has an opportunity to kickstart his stop-and-go CFL career, weeks after the Argos released the 26-year-old, deciding his relaunches were no longer worth the time in dry dock. 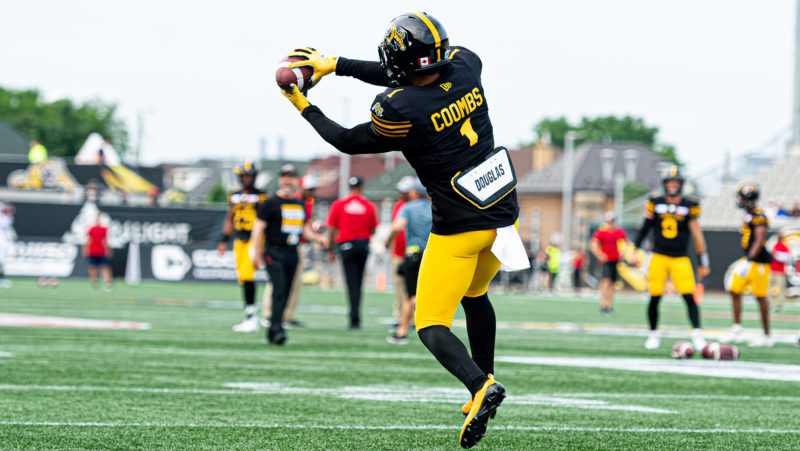 He is grateful for the opportunity ahead of him with Hamilton, with hopes that his continual visits to the infirmary have been left behind at the other end of the Queen Elizabeth Expressway.

“Wherever the team feels like it can best use me, that’s where I’ll go,” says Coombs, a star running back with the University of Manitoba Bisons who was converted to receiver as a pro upon graduation, five years ago, with the Argos.

“I actually don’t really have a preference,” he says when asked where he wants to line up for the Ticats. “Both have their pros and cons and both are fun to me.”

We’ll see just what the Hamilton braintrust has in store for Coombs this Saturday night, when the team plays host to the Calgary Stampeders.

There are options for Hamilton. They have Canadian depth behind Thomas Erlington, in the form of rookie tailbacks Maleek Irons and Jackson Bennett. They have Coombs, too, who says he would be more than happy to swing into the position again, reliving the days when the Bisons used him as an effective battering ram against opponents.

“Running between the tackles, it’s kind of like riding a bike,” says Coombs. “You don’t ever lose it.”

Coombs was a tremendously successful running back while with the Bisons. The Winnipeg native racked up more than 2,200 yards rushing during his career. When he caught passes out of the backfield for over 500 yards during his final season, the Argonauts figured it was worth nabbing him with the third overall pick of the 2014 draft, hatching a plan to convert him into a full-time receiver.

With the Argos, Coombs was expected to fill the shoes of sublime veteran Andre Durie, who was in the twilight of his career.

In Coombs, the team saw an athlete with similar skills to Durie’s and an upside that had them very excited about the prospects of him shifting from the running back position he’d known so well in university. It was the same kind of transition Durie had made, himself, during his early
days as an Argo.

And Coombs fit the bill, proving to be a serious student of the position, to go along with the speed and shiftiness that would make him a yards-after-catch star. He also showed the ability to lower his shoulder and take on tacklers with the know-how he’d gleaned while lugging the rock with the Bisons.

EPISODE OVERVIEW: The guys break down the decision making during the dramatic ending to Saturday’s game between the Lions and the Argonauts. Plus, how do the Ticats fill a Sean Thomas Erlington sized hole and why are the Bombers being so secretive? This and more on this week’s episode of the Waggle presented by Sport Clips.

His work on the field was just what the Argos had hoped for. There was a problem though; Coombs couldn’t stay on that field for significant stretches, spending almost as much time on the injured list as he did in the huddle.

Six games into his rookie year, Coombs dislocated a shoulder and missed the rest of the season, just as he was showing what he could do.

“That was really the only injury that was a season-ending injury,” he says, before going on to list the others that interrupted his time in double blue.

“The rest kind of just came in waves,” he recalls. “In 2017 I did my collarbone and that kind of split my season in half (he missed weeks 10 through 19 but returned for the late season surge, catching 9 passes for 77 yards in Toronto’s Eastern Final win over Saskatchewan).

“(Last) year, I sprained my ankle in training camp, which wasn’t a serious injury. But because of my position, it was really tough to get to the level of a player that I was before the injury. Because it was an ankle and I would do so much cutting and route running.”

He got back into the line-up mid-season.

“Second game back, I injured my knee,” he says of a ligament strain that knocked him out for the rest of the year.

To say that Anthony Coombs could not stay in the line-up for any significant stretch would not be completely unfair when assessing his injury-troubled time in Toronto. However, that assessment should only come with the acknowledgment that he did suit up for 35 of 36 regular season games in 2015 and 2016. 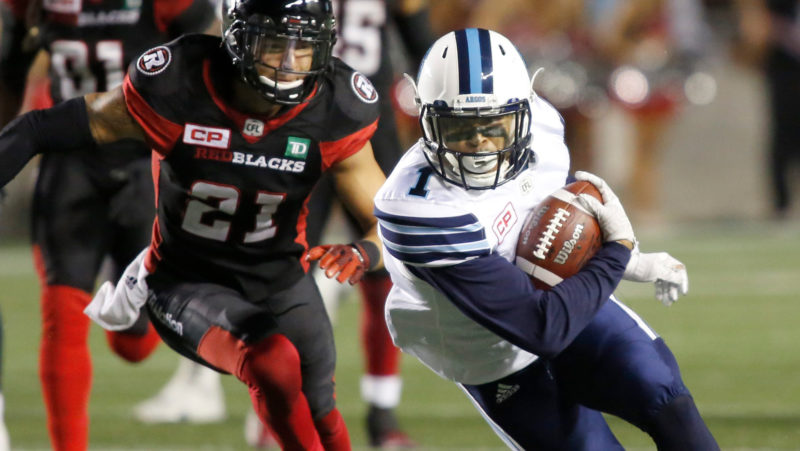 COOMBS BATTLED THE INJURY BUG DURING HIS TIME WITH THE ARGONAUTS (PATRICK DOYLE/CFL.CA)

That’s the Anthony Coombs that the Ticats hope they have and, obviously, the one he hopes he can provide.

“It was disappointing,” says Coombs of being released by the Argonauts, back in early June. “I’d spent a lot of time there. It was my only professional team. But it was an opportunity to start a new chapter, get a fresh start.”

“Thankfully, for me, Hamilton thought I’d be a good fit here and I got my shot.”

Originally, Coombs was brought in to be a bit of a specialist, to be trotted out to change up the look of the Hamilton offence from time to time.

“At the time they had STE, they had a lot of good receivers so it was more of a package thing,” he says of the role the Ticats pitched him before he signed. “A lot of the guys here earned a starting spot and they’ve been doing fantastic on the field. I knew when I was coming in that I’d probably get my place here and there, which was fine.”

“I had an idea what the deal was when I was coming in, but I was just excited for the opportunity, regardless.” 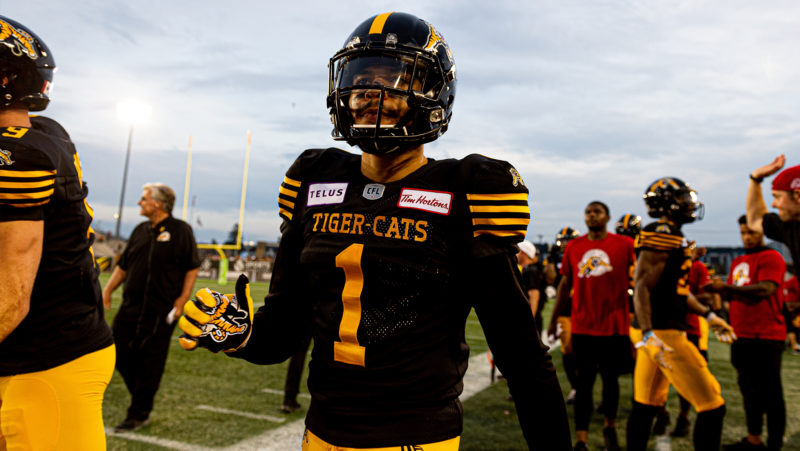 “Seems like a year, I don’t know if it’s been that long,” he muses.

Not quite, but close enough. Coombs saw touches in a game last August 24th, then got his first of this season last week. When Thomas Erlington went down with a knee injury during the first quarter, the amount of action Coombs had anticipated was suddenly increased. His numbers were very nice; 5 catches for 61 yards and 6 rushes for 51 yards.

If he’d had his way, he would not have had more playing time due to the injury of a teammate. He knows all too well how the other end of that scenario feels. As well, he admits he felt rusty.

“I kinda just had to get thrown into the fire,” he says of the Montreal game. “As the game evolved I got more comfortable. But there was a lot of mistakes out there on my part. I think it’s just gonna come with experience, with reps with the offence. Sometimes the only way to learn is just to go in there. And just get better as you make your mistakes.”

“It was good to get out there, get hit again, and have some fun playing,” says Coombs. “It’s been a while since I got hit so I was pretty sore the day after. But I’m ready to go this week.”