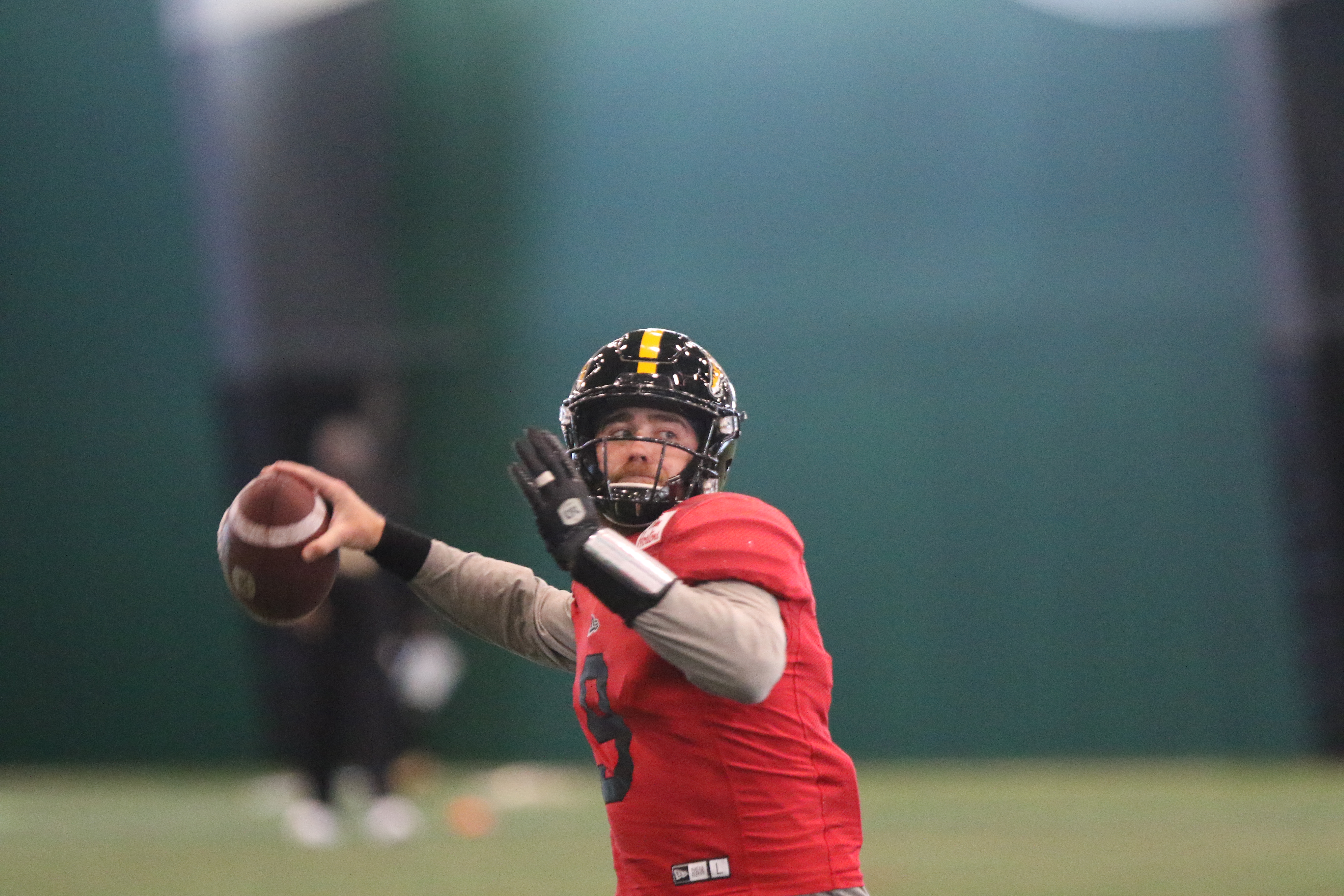 News
LANDRY: GOING INSIDE THE MIND OF DANE EVANS
November 22, 2019

Dane Evans can hear the sounds that surround game day, in his mind. He can see the vendors setting up their wares as he strolls into Tim Hortons Field. He can, he says, even smell the roast pig on a spit, the aroma wafting through the air from the parking lot barbecue.

Things get real for the Hamilton Ticats’ rising star quarterback, whenever he closes his eyes and allows his brain to transport him to a place and a moment.

If physical talents and abilities have played a large part in the emergence of the 26-year-old this season, what you don’t see, ironically, takes on an equally important role.

Blessed with a strong arm, great mechanics and quick feet, Dane Evans has obliterated any doubts as to whether the Ticats are in good quarterbacking hands after an injury sent incumbent Jeremiah Masoli to the sideline for the season.

You take those elements and blend them with great coaching and you get a capable pivot. Add a strong mind and you get something special, and Evans believes that, practicing visualization often.

» New Stripes: Van Zeyl enjoying time in rival colours
» Ticats’ defence looking to make ‘radical splash’ against Bombers
» Head-to-Head: Who has the edge in the Grey Cup?
» O’Leary: 5 storylines to follow at 107GC 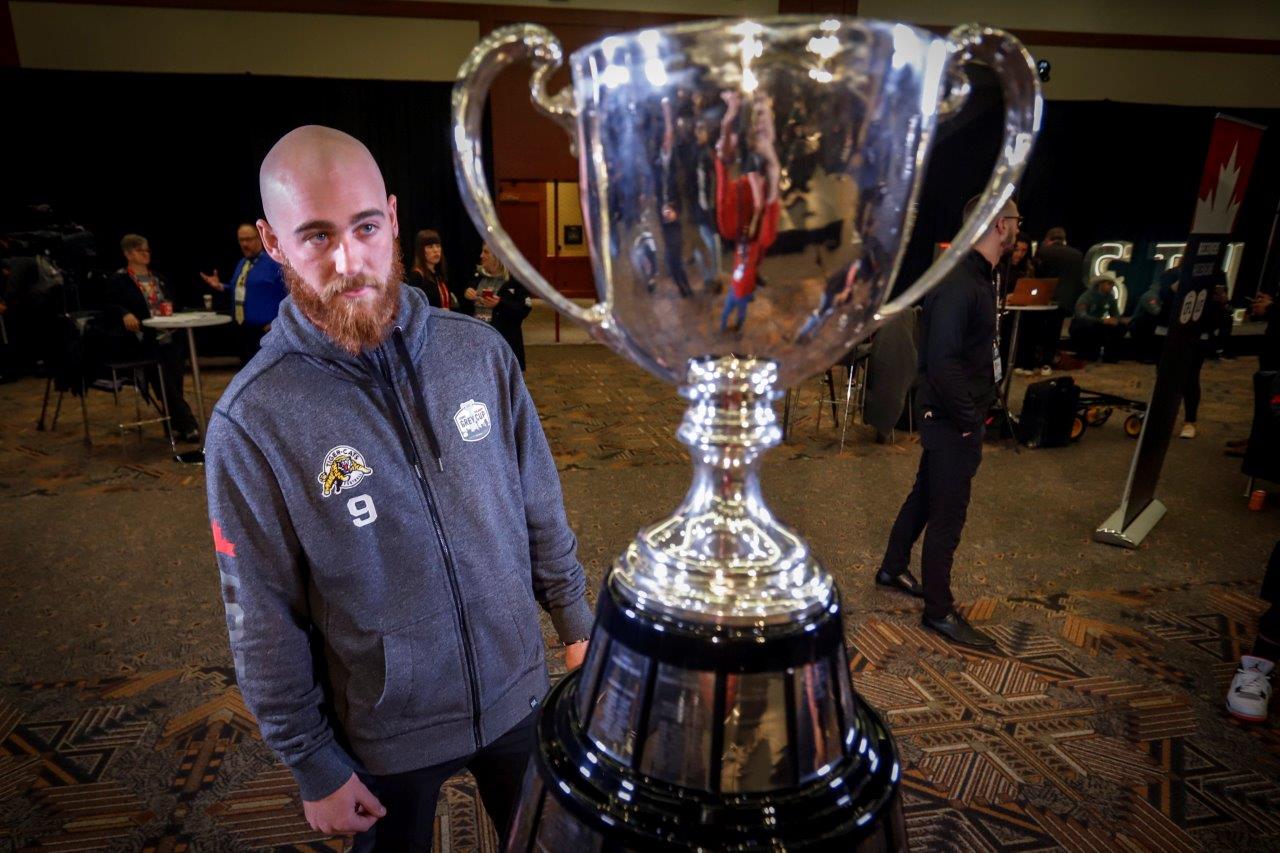 DANE EVANS LOOKS ON IN AWE OF THE GREY CUP AT CFL MEDIA DAY, HOPING TO ETCH HIS NAME ON THE TROPHY COME SUNDAY (CP).

During a lull in practice, in film sessions, when he’s lying in bed at night. Evans counts on the power of training the mind and he takes opportunities when he can to sharpen his.

“When you really put yourself in that state, your body can’t tell that you’re not there,” says Evans, sitting down for a confab at the Ticats’ media day ahead of the 107th Grey Cup presented by Shaw.

“Your mind thinks it’s there happening right now even though you’re laying in bed,” he continues. “Your brain cannot tell the difference that you’re not in that moment.”

Do it enough, Evans says, and what a person sees in their mind’s eye can make reality a familiar thing. A familiar, welcoming thing.

“When I get out on the field, I’m just so ready to go,” Evans says. “I mean, like, I’ve seen all this in my head before. It’s time to go to go actually see it now.”

That explains a little something that observers could not help but notice about the native of Texas, as he threw for over 3,700 yards and 21 touchdowns in 2019; his poise.

Displaying the calm personality of a seasoned veteran, Evans went quickly from stop-gap measure to difference-maker in a Hamilton offence that marched on in the absence of Masoli, terrorizing CFL defences with big plays.

Many of those big plays came with YAC, as Evans fed stars like Brandon Banks and Bralon Addison on short routes. Others – increasingly so as the season wore on – came due to Evans’ crisp, pinpoint downfield pass attempts. Whatever the manner, he’d already seen those plays work out in his mind.

“Sometimes it’s you know, I did visualize that pass out there in the flat for two yards,” says Evans. “But sometimes it’s like, yeah, I did see that touchdown that I just threw, like, I expected it type thing.”

Setting himself up for success, in his own mind, is something Evans has been doing since he was a young boy, when his father, Damon, got him started on the trail of making his mind a powerful ally.

The youngster was struggling at another game; baseball.

“This one particular year, I was having trouble hitting,” Evans remembers. “I was always a good hitter, but I was just in a little slump, you know how they get in.”

“I just needed something to bust out of it. And visualization really helped me bust out of that. And I learned that as what, an eleven, twelve-year-old. And I’ve just kind of always been doing it since then.”

When it comes to life as a pro quarterback, Evans says he takes opportunities where he can, breaking up his film study with visualization breaks, so he can let things sink in.

“The way I watch film is in cut-ups,” he explains. “So, say I just watched all our quads formations. Before I move on to the next one, I’ll just take a second. And I’ll just be sitting there. And I’ll be thinking of all the plays that we could be running and kind of like, seeing how the guys move in my head, and how our guys are running the routes and things like that.”

Evans figures that since a player is given only so much practice time during the day, why not squeeze in a bit more, even if it’s just between the ears?

“You only get so many live reps at things,” he reasons. “And the more the more reps you can get, it helps.”

At home, the mental work continues when Evans gets a disposable moment here or there.

“The way I do it,” he begins, “is, you know, just kind of like when you’re winding down at night, sometimes it’ll be just sit on the couch or maybe even when I’m laying in bed, just kind of closing your eyes and really painting the picture of everything you think that it’s going to be. What it’s going to sound like, what it might smell like. What it might feel like.”

He admits that at first he thought the idea was a bit cheesy when his dad brought it to him, but he stayed with it and a busted batting slump later, Evans was on the road to buying in to the idea of visualization.

And not just in his sports life, either.

He gives a personal example, involving his wedding day and his wife, Nikki.

“We got married in the desert at Joshua Tree (National Park), Evans says. “I tried to visualize myself standing there you know, with the Joshua trees beside me, standing on the hard dirt. What would I be looking like? What would she be looking like? Try not to cry. You know what I mean? Things like that.”

Try not to cry. It makes you wonder if a guy might have been so bold as to visualize the raising of a big ol’ silver mug. Can you do that? Or is that just tempting the karma? 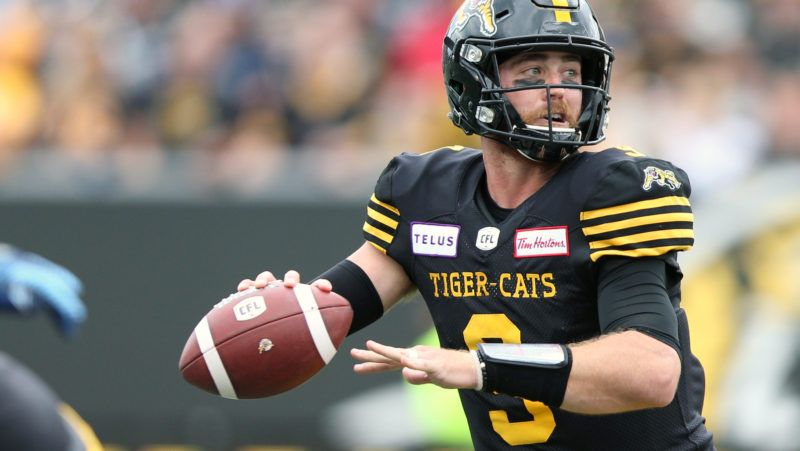 “I think you can,” says Evans, before quickly adding a caveat. “But I don’t think you should just visualize that. I think that should be a byproduct of everything else that you visualize, and it’s the last one.”

“We kind of do that a little bit, in practice,” says Evans, before going on to describe the way the  Ticats like to end their on-field prep sessions. It’s not a visualization of a championship moment, but it is of a game-winning one.

“We end every practice,” Evans says, with taking a knee, and then everybody storming the field. And it’s like, ‘what are they doing? It’s just day one of practice. Why are you doing that?’”

“But that’s kind of like our visualization at work.”

And work, it does. With the kind of season the quarterback and his team have had, it’d hard to deny that.