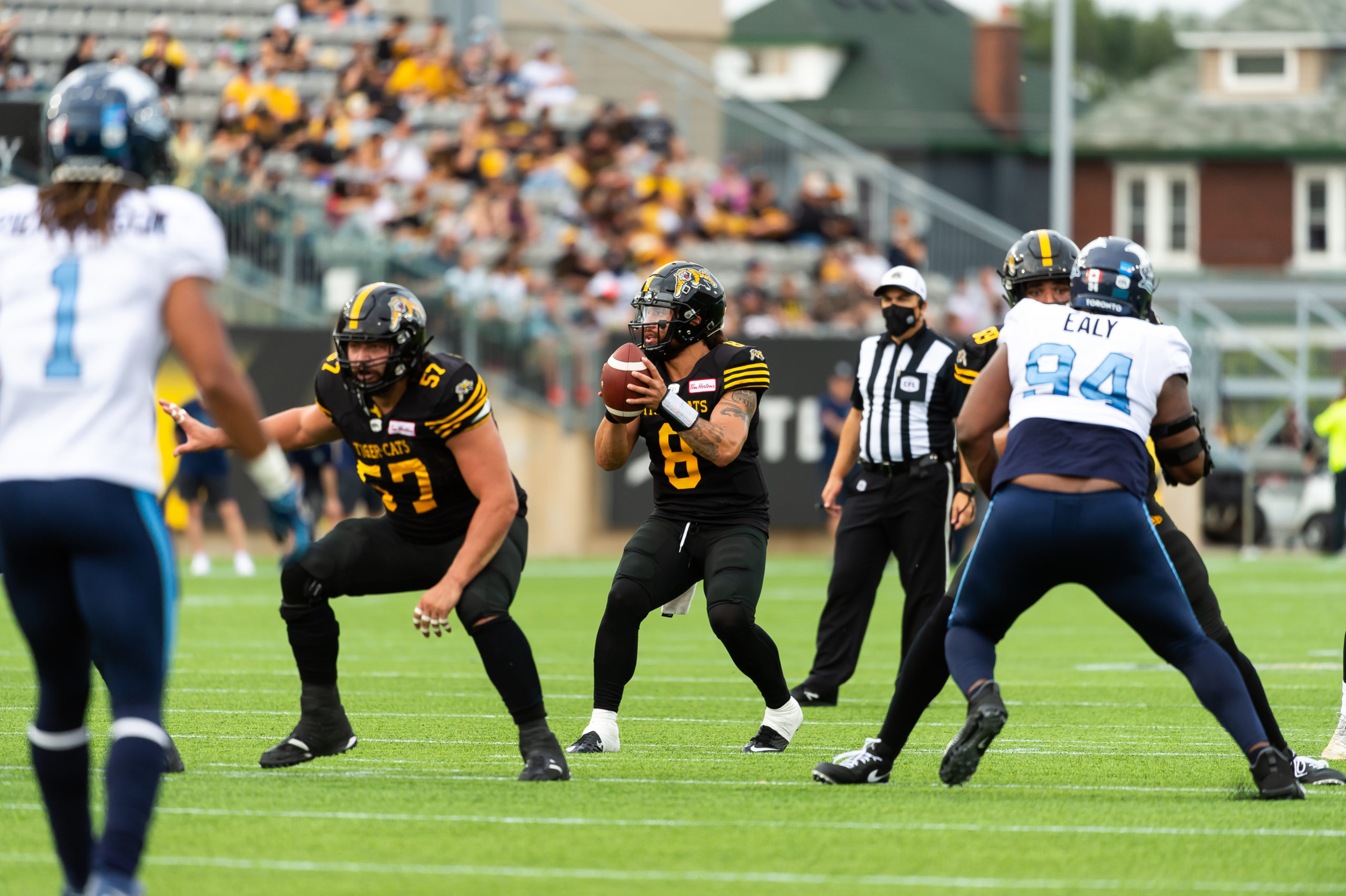 Hamilton came out of the gate ready and hungry for a win after a dramatic loss to the Montreal Alouettes. After punting on their first drive of the game, three consecutive drives ending in points for the Ticats saw the Argos face an early deficit.

The Argos’ first points would come in the form of safety. Bede would add a field goal in the final moments to send the Argos to the locker room down 12-5.

The second half would see the two teams play a lot closer. Both Masoli and Mcleod Bethel-Thompson would throw for touchdowns as the game would go down to the wire, but it would be the Argos coming out on top.

In his second-straight start and second consecutive win, Bethel-Thompson threw for 388 yards. On the other sideline, Jeremiah Masoli threw for 361 yards and a pair of touchdowns.

RELATED
» Through the Lens: Toronto at Hamilton
» Boxscore: Argos, Ticats by the numbers
» Watch: Sean Thomas-Erlington finds space and takes it to the house 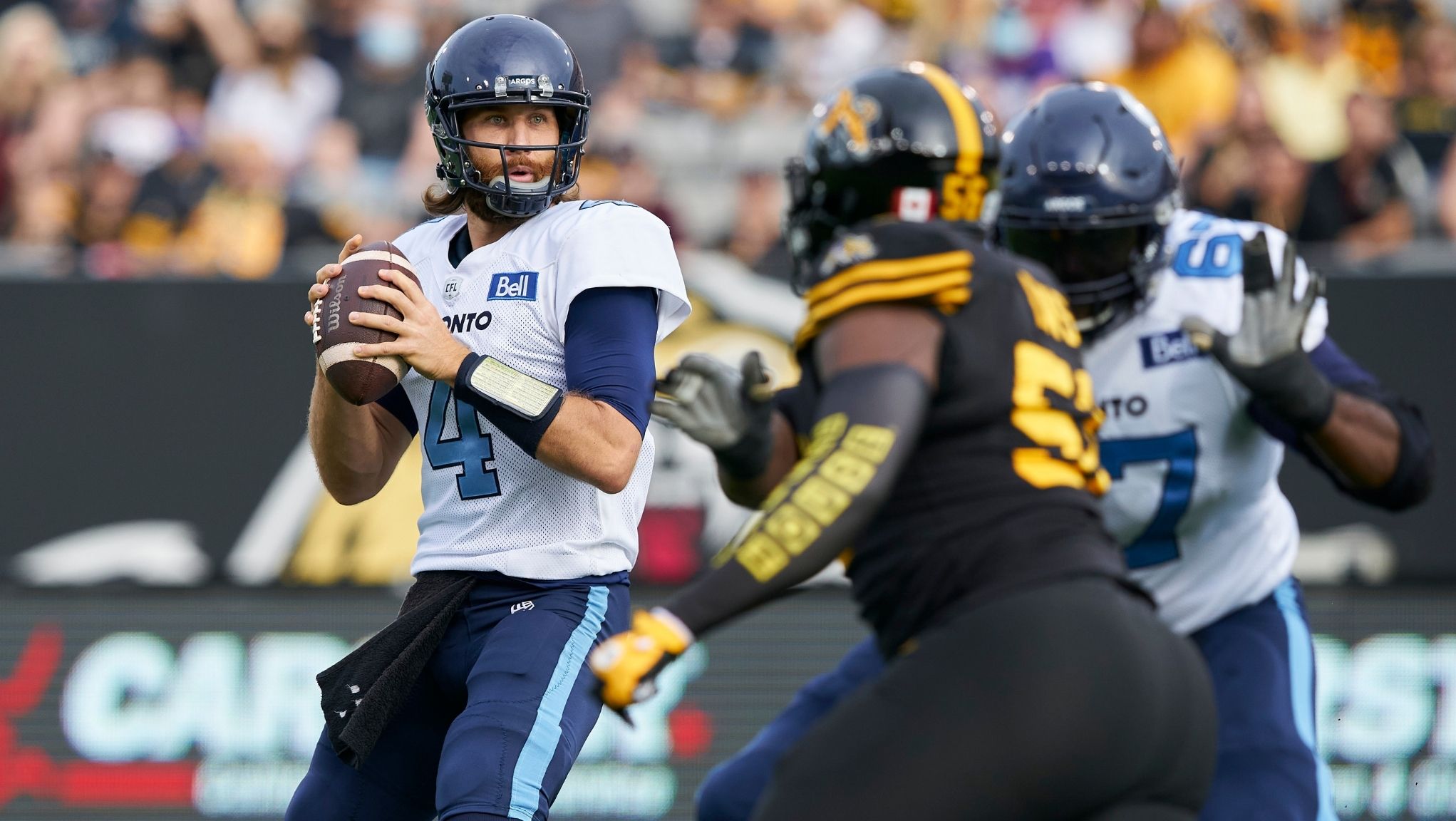 TORONTO QUARTERBACK MCLEOD BETHEL-THOMPSON LOOKS FOR A RECEIVER DURING FIRST QUARTER CFL ACTION BETWEEN THE ARGONAUTS AND THE HAMILTON TIGER-CATS IN HAMILTON, ONTARIO ON MONDAY, OCTOBER 11, 2021. GEOFF ROBINS/CFL.CA

Following opening drives that came up empty for both the Argos and Ticats, Masoli and offensive coordinator Tommy Condell opted to up the tempo. In doing so, the Ticats found themselves immediately able to move the ball against the Argos’ front.

After David Watford entered the game in relief of Masoli for a short-yardage package, a lung forward awarded the Ticats a fresh set of downs. With Masoli now back under centre, he found Sean Thomas-Erlington moments later on a screen pass behind a blitzing Argos’ defensive line who followed his blocks all the way to the endzone for a Ticats’ touchdown.

Hamilton would continue to find success with their running backs on their very next drive. This time, it was Maleek Irons whose 49 rushing yards coming in the span of three plays got the Ticats in Double Blue territory. Back-to-back completions to Jaelon Acklin and Bralon Addison got the Ticats offence within striking range, though a failed second-down conversion saw Taylor Bertolet, who missed a point-after-try earlier, fly his 28-yard attempt through to put the Ticats up 9-0.

The Ticats would score on their third-straight possession with Bertolet’s 20-yard attempt making it a one-sided, 12-0 Ticats’ lead.

Toronto’s game-breaking defence that was dominant just a few days ago made their presence felt midway through the second quarter. After Masoli was brought down within feet of his own endzone by Dexter McCoil for a loss of seven yards, punter Joel Whitford was swapped with defensive back Tunde Adeleke. Adeleke collected the long snap and proceeded to dance around Argo defenders in his own end zone before giving up the safety.

With under a minute left to play in the half and the Argos set up on the Ticats’ 30-yard line, they looked to close the gap.

Hamilton would have other ideas as Bethel-Thompson was sacked by Ja’Gared Davis, forcing a Bede field goal, making it 12-5.

Toronto would come up empty on what seemed to be a promising their first drive of the second half. Recording four first downs on the drive, the most they had been able to muster so far, Toronto worked their way down to the Hamilton 46 yard line. Bede would be called upon but would miss his field goal attempt wide right, allowing Marcus Green a 15-yard return.

Both teams would not be able to find points come the third quarter. After multiple two-and-outs by both offences, Toronto was able to string together a promising drive late in the third. Now facing a chance to tie the game, Jumal Rolle broke up what seemed to be a sure touchdown pass from Bethel-Thompson to Chandler Worthy‘s hands.

Bede’s three points would bring the Argos within five points of the Ticats’ lead.

looking to respond, the Ticats leaned on the arm of Masoli to guide them down the field. Back-to-back completions to Steven Dunbar got the Ticats moving before Masoli found Acklin bursting up the left sideline who hauled in a home-run ball for a 45-yard touchdown.

Toronto would record a touchdown of their own as this time Bethel-Thompson’s attempt to Worthy ended in a touchdown, sliming the Ticats lead to just five points.

Bethel-Thompson would engineer the Argos’ second-straight scoring drive as he would connect with DaVaris Daniels for his second touchdown toss of the day making it 21-20. The Argos would attempt to widen the gap with a two-point conversion, but Kameron Kelly would intercept the pass.

With under two minutes to play Bertolet’s attempt from 12 yards out reclaimed the Ticats lead.

Now down by two points, the Argos were in a race with the clock. Surging their way down the field, Bethel-Thompson was able to get Bede in range for a 44-yard attempt that would secure the Argo’s second-straight victory.

Both teams will enjoy a Week 12 bye. Come Week 13, Toronto will travel to Montreal to take on the Alouettes at 7:30 p.m. ET for Friday Night Football. Hamilton will host the Ottawa REDBLACKS on Saturday at 4:00 p.m. ET.