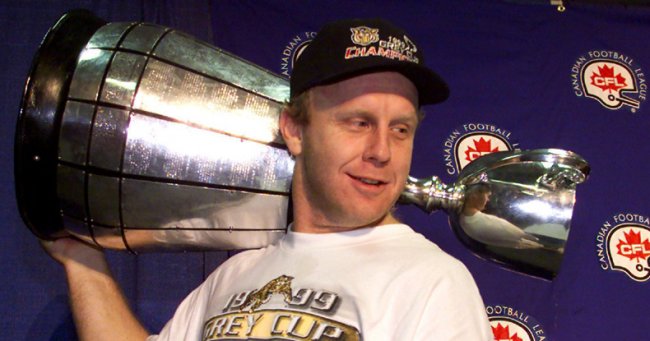 The Hamilton Tiger-Cats and the Hamilton Tiger-Cats Alumni Association (HTCAA) announced Wednesday that Canadian Football Hall of Fame quarterback and 1999 Grey Cup champion, Danny McManus will be the 25th person inducted to the Wall of Honour at Tim Hortons Field on Friday, October 7 when the Tiger-Cats host the Saskatchewan Roughriders. McManus and his number 14 will join the 24 other distinguished Wall of Honour inductees on the facade on the west side of the stadium during a halftime ceremony.

“Danny Mac’s record-breaking ability and leadership skills on and off the field exemplified exactly what it means to be a Hamilton Tiger-Cat and member of the Hamilton community.” said Bob Young, Caretaker of the Tiger-Cats. “I’m thrilled Danny’s number 14 is going up on the wall to honour him along with the great Ticat teams of the late 1990’s and early 2000’s.” 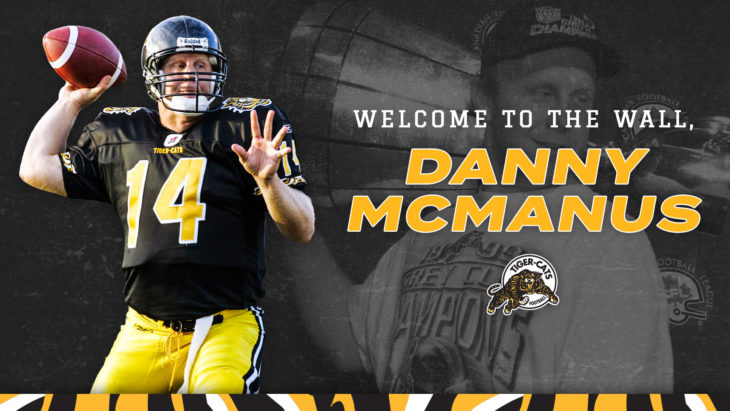 Throughout his Tiger-Cats career, McManus was CFL’s Most Outstanding Player (1999), a CFL All-Star  (1999) and a CFL East-All Star (1999) and was inducted to the Canadian Football Hall of Fame in 2011. He was also the recipient of the Tom Pate Memorial award (2005), for his outstanding work in the Hamilton community, headlined by his work with McMaster children’s hospital through the “Touchdown for Kids” initiative.

The Wall of Honour is the single largest acknowledgement of excellence the Tiger-Cats and the HTCAA can provide, and is based on a rigorous criteria collectively established by both parties. It symbolizes elite performance over a sustained period wearing the Black and Gold as evidenced by the legendary names honoured in the past. The winner is voted upon by a committee composed of members from the Club, HTCAA, local media and the team’s TigerTown Council.