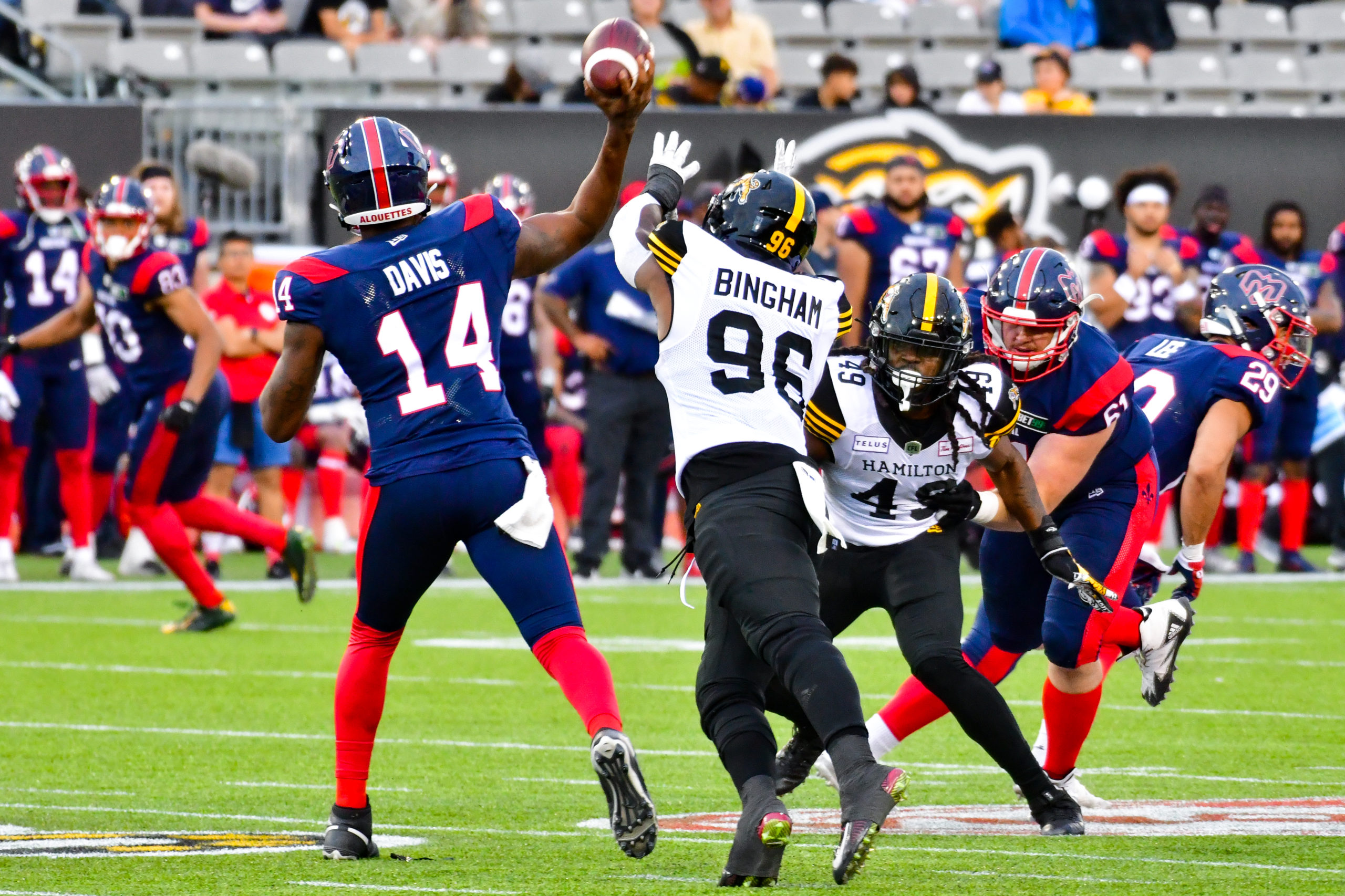 HAMILTON — As Week 8 gets underway on Thursday night with the Hamilton Tiger-Cats hosting the Montreal Alouettes, it will mark the first meeting between the two division rivals this season.

Hamilton is coming off a tough 17-12 loss to the BC Lions last Thursday, while Montreal enters the game after besting the Ottawa REDBLACKS 40-33 in Week 7.

Having given up an average of 27.8 points per game, the Tiger-Cats defence showed their teeth as they limited the high flying Lions offence to just 17 points in Week 7.

It should come as a significant confidence boost heading into this week’s matchup for a Hamilton team that prides themselves on keeping offences in check.

In what should come as no surprise, defensive back Tunde Adeleke and defensive end Julian Howsare starred for Hamilton on the defensive side of the ball. Both intercepted a Nathan Rourke pass and will look to capitalize again in Week 8 when the Alouettes put the ball in the air.

Defensive tackle Dylan Wynn recorded the lone sack for the Ticats last week, which brings the teams total to 10 on the season.

Offensively for Hamilton, quarterback Dane Evans threw for 297 yards with a touchdown and an interception against the Leos in Week 7. He’s currently second in the league in total passing yards with 1,720, trailing only Winnipeg’s Zach Collaros who has 1,724 yards and one more game played than Evans.

The Ticats’ rushing attack is averaging 73.3 yards per game, which ranks last in the CFL. Meaning that the play of the Ticats receiving corps will be crucial as they hope to collect another win on Thursday.

Hamilton’s three pass catchers have combined for 1,139 receiving yards and six touchdowns. For Montreal, limiting the trio of playmakers will go a long way in their attempt to pick up a win a second consecutive win.

“The race for the East starts now,” Addison told ticats.ca. “I think if you look at the record on paper it says 1-5, but if you watch game tape there’s things we do that shoot ourselves in the foot. I think were 2-3 plays away from being 5-1 or 4-2. We have to try to put it all together this Thursday and come away with a win.”

Head coach Orlondo Steinauer agrees with Addison and isn’t shying away from his teams early season struggles, but he knows that they’re a better team than their 1-5 record indicates.

“We’re 1-5, that’s what we are,” Steinauer told ticats.ca. “We’ve been in every football game and that’s important because that’s the difference between wholesale changes and tweaks. The first third the record is what it is. It has no bearing on the game coming up on Thursday and that’s the focus. The reflection is over with and it’s all forward.”

When the run game is active for the Tabbies, look for Don Jackson and Evans himself to carry the load. Jackson is coming off a 36 yard performance in BC last week, which saw him tally a team-high 11 carries.

Quarterback Matthew Shiltz has also been worked into Hamilton’s multifaceted offence as a of late, he has rushed for 57 yards and a touchdown on 12 carries over his last three games, paired with five passing attempts for 27 yards over that same span.

On the opposing sideline, Montreal’s Trevor Harris had one of his best games of the season under centre against the REDBLACKS last week.

The Als pivot completed 80.6 per cent of his passing attempts, throwing for 341 yards and two touchdowns in the win over Ottawa. Equally as impressive was the fact that he limited his turnovers and did not throw an interception on 31 passing attempts.

“It’s a big win for us; we needed it,” Harris told TSN in a postgame interview. “But it is (just) one win. We’ll watch the film, correct our mistakes, get better and move on to the next week and go see Hamilton in the Hammer.”

Five Alouettes receivers have stepped up in recent weeks, sending opposing defences into fits when it comes to attempting to shut down their passing game.

Hergy Mayala caught five passes for 102 yards and a touchdown against the REDBLACKS and Reggie White Jr. totalled 99 yards on five catches. Eugene Lewis, Kaion Julien-Grant and Jake Wieneke are also dangerous options for Harris. Lewis is currently fifth in receiving yards with 465.

Running back Jeshrun Antwi continued his strong play against Ottawa, rushing for 77 yards, Antwi has collected 297 yards this season and is averaging 7.07 yards per carry.

When the Als are near the goal line, look for quarterback Dominique Davis to get a few attempts at converting the short-yardage score.

The Montreal quarterback has been scoring at an impressive rate this season, against Ottawa in Week 7 he recorded three touchdowns on six carries, and his season total of seven leads the CFL in rushing touchdowns.

However, there is room for improvement for Montreal on the defensive side of the ball, the Als allowed 33 points to a REDBLACKS team that entered the game averaging 19.2 points per game.

Their defence failed to pick off a pass, but did record a pair of sacks in their Week 7 win over Ottawa. Defensive end Avery Ellis and defensive lineman Mike Moore did the damage on quarterback Caleb Evans.

Hamilton has allowed 17 sacks enough for the third most league-wide, something the Als defensive front will look to exploit. As a unit, they’ve sacked opposing quarterbacks 15 times, good for third best.

The race in the East Division is a tight one. With a win the Ticats would move to into a tie for second with the Als. If Montreal can pull out the victory, they’ll tie Toronto for the time being atop the division.

The game will kickoff at 7:30p.m. from Tim Horton’s Field and can be seen on TSN, RDS and can be followed along on CFL.ca’s Game Tracker.