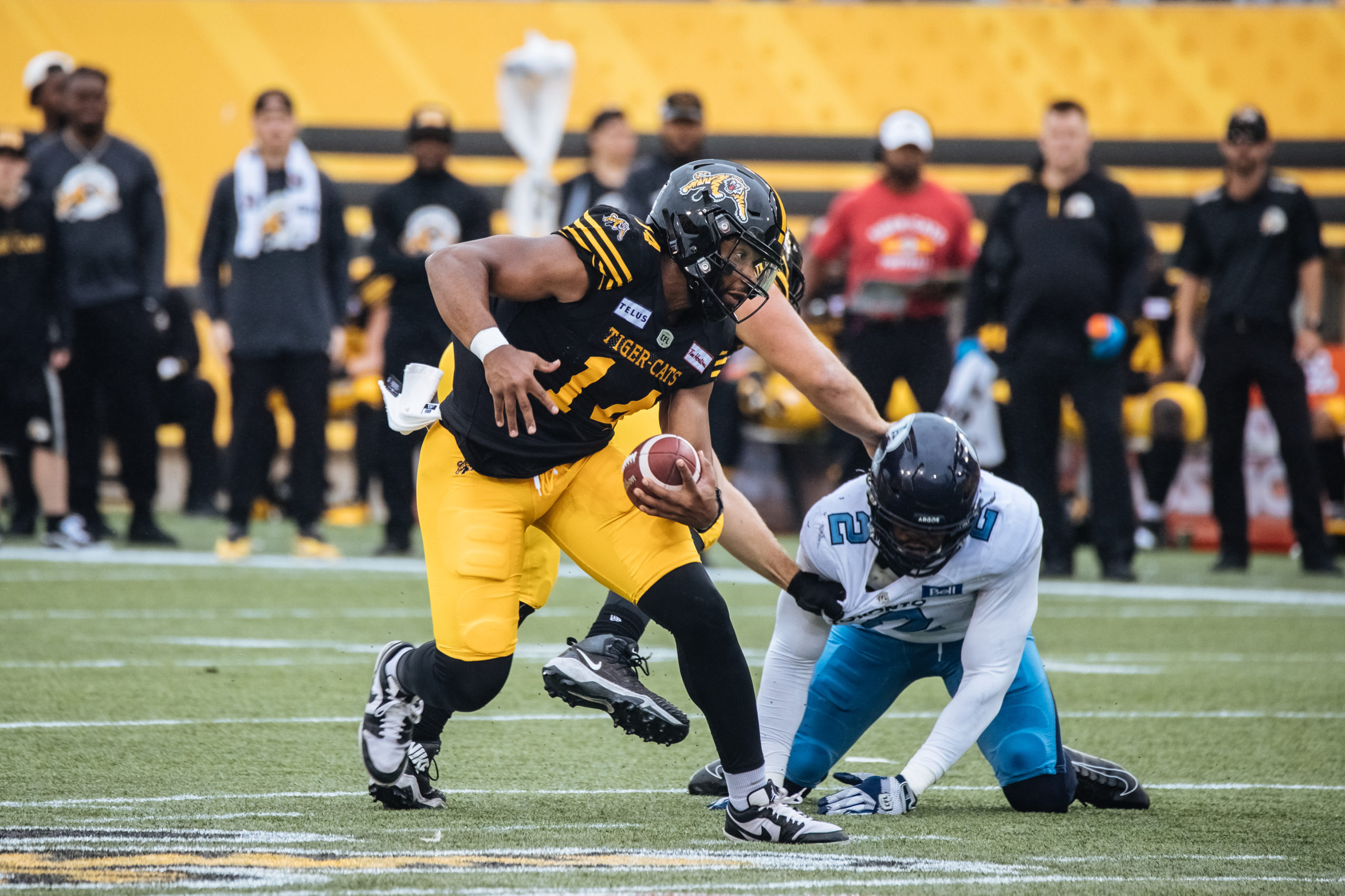 News
RECAP: 2022 LABOUR DAY CLASSIC
September 5, 2022
HAMILTON — A 10-year Labour Day drought is over for the Toronto Argonauts. The Double Blue topped the Hamilton Tiger-Cats 28-8, ending a decade of holiday Monday futility against their arch rivals.

The Argos’ defence stepped up and turned an 8-8 game into a very comfortable win, thanks to a pair of interceptions from defensive back Jamal Peters. On the offensive side of the ball, Brandon Banks returned to Hamilton to haunt his former team with a pair of second half touchdowns that put the game out of reach.

McLeod Bethel-Thompson was 22-34 for 298 yards, two touchdowns and a pair of interceptions.

The Argos made a statement almost immediately out of the gate. Bethel-Thompson found former Ticat Brandon Banks for a season-best 53-yard completion that put the team into scoring position. Next, he quickly fired the ball 26 yards to Markeith Ambles, who flipped his way into the end zone to open scoring and silence the record crowd of 25,266 fans at Tim Hortons Field. The three-play, 79-yard drive was capped by Boris Bede‘s convert at 5:29, making it a 7-0 game.

After a 67-yard punt single from Michael Domagala, the Ticats caught a break when Bede missed a 43-yard attempt to the right. The miss restored Toronto’s seven-point lead, making it an 8-1 game to close out the first quarter.

Hamilton fans roared back to life early in the second quarter when the Ticats’ defence got them back into the game. Jumal Rolle pulled in a Bethel-Thompson pass that came off of Damonte Coxie‘s hands. The All-Star defensive back wasted no time in trotting 66 yards to the end zone. Seth Small’s convert went through at 3:44 to tie the game at eight aside.

The Argos’ defence entered the conversation next, with a familiar face and pair of hands making an impact on the game. Jamal Peters snagged a Newman pass — his fourth in these teams’s past two meetings — and set the Argos’ offence up on their own 36-yard line, though the drive fizzled quickly.

With Bethel-Thompson looking to the end zone in the final minute of the half, Rodney Randle capitalized on a miscommunication that the quarterback had with receiver Kurleigh Gittens Jr. and caught the would-be touchdown, running it out to his own 14-yard line. Like the Argos’ opportunity, the Ticats’ gift of a possession didn’t go anywhere.

A defensive stalemate of a third quarter gave way to a promising Argos’ drive that got as far as the Ticats’ 16-yard line. Bethel-Thompson looked to Banks in the end zone on that drive, but had the play broken up by Malik Carney. That brought Bede out for a 23-yard field goal that put them back in front, 11-8 at the 12:41 mark of the third.

The Ticats turned to Morton at quarterback after the Argos’ field goal and survived what appeared to be a fumble deep in their territory that was ruled an incomplete pass. The Argos took their three-point lead into the fourth quarter.

Morton wouldn’t be spared in his next drive, as he wasn’t able to get the short yardage needed to keep the offence on the field. The Argos cashed in on the turnover with style. After a pair of handoffs on second down, Banks got the ball and appeared to think about passing it while he scrambled, before he ran into the end zone — with the help of a block from Bethel-Thompson — for the touchdown. Bede’s convert pushed the Argos’ lead to 10 points, at 18-8 at 3:33 of the fourth quarter.

Sensing a death blow to the Ticats, Peters struck again, pulling in a second interception off of a pass that bounced off of Steven Dunbar Jr. It took Bethel-Thompson just one pass — a 27-yard toss — to find Banks, who gleefully celebrated his second touchdown of the day, waving to the fans that cheered him for the first eight years of his career.

Up against the clock and desperate for points, the Ticats ended up turning the ball over on downs again with a Newman incompletion at 10:34.

After a gruelling four meetings in five weeks between these teams, they get some change. The Argos will travel to Ottawa to face the REDBLACKS, while the Ticats go into a bye week.