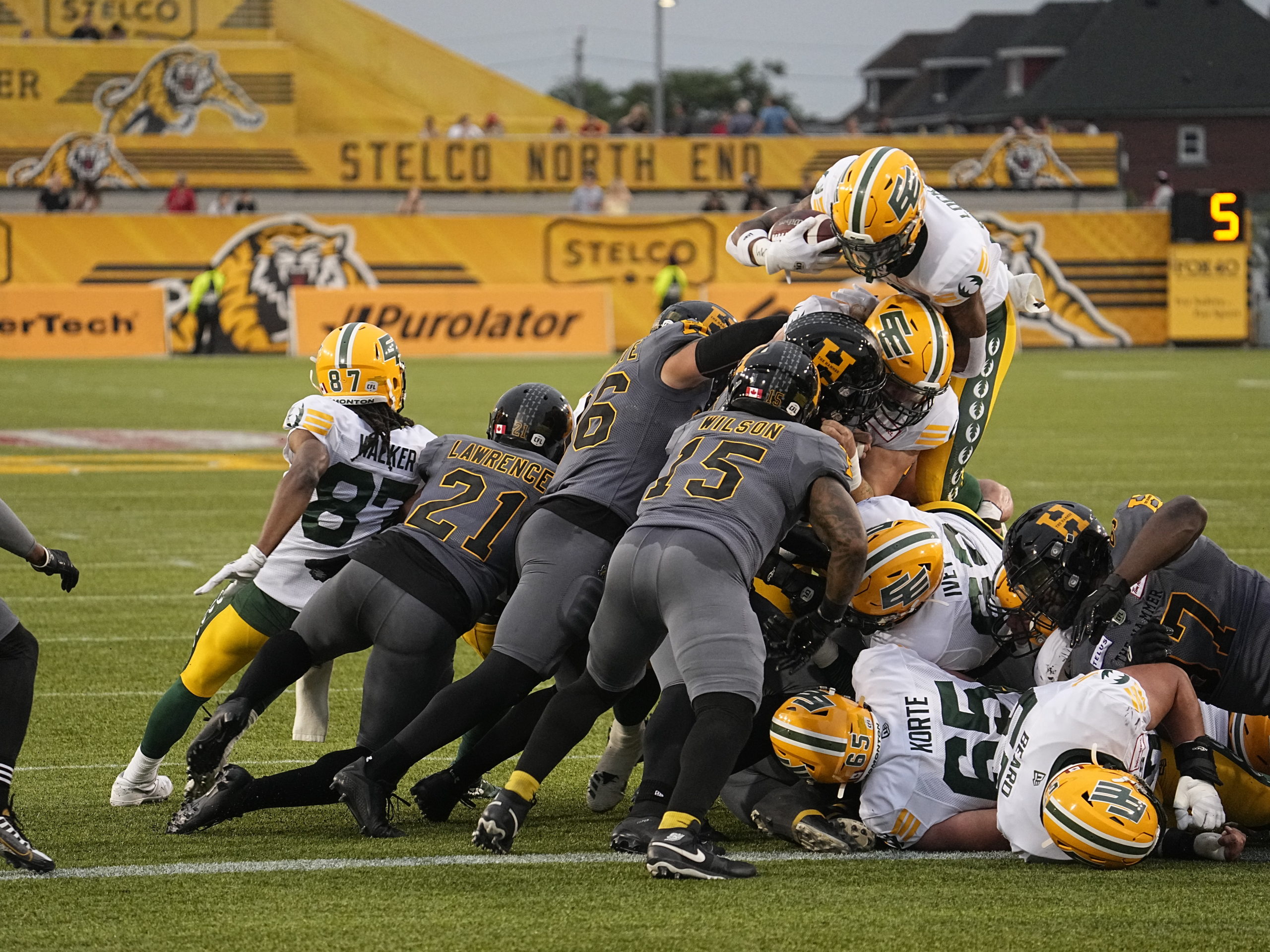 HAMILTON – Jalen Collins returned a fumble for a late touchdown to give the Edmonton Elks a 29-25 Canada Day win over the Hamilton Tiger-Cats on Friday at Tim Hortons Field.

Making his first career CFL start, Canadian rookie quarterback Tre Ford threw his first CFL touchdown while completing 15 of 26 passes for 159 yards with one interception. The dynamic 24-year-old from Niagara Falls, Ont., also gained 61 rushing yards on six carries while leading Edmonton (1-3) to its first win of the season.

Hamilton quarterback Dane Evans made 20 of 31 passes for 197 yards with a touchdown and two interceptions, but he was unable to mount the late comeback on the final drive.

The Ticats took an early two-point lead after the Elks conceded a safety while backed up deep in their own end, and they quickly added to their lead on the ensuing possession when Evans threw a 21-yard touchdown strike to Steven Dunbar Jr.

Dunbar beat defensive back Ed Gainey on the deep post for his third major of the season, and Michael Domagala kicked the extra point to give Hamilton a 9-0 lead.

But Ford and the Elks’ offence responded right away, as the dynamic rookie gained 11 yards on the ground before completing back-to-back passes to Kenny Lawler and Charles Nelson to move the ball into Hamilton territory. Ford then rolled out to his left to find Lawler for a 16-yard pickup on the left sideline to bring the Ticats into scoring range.

The Canadian pivot followed it up by scrambling to the right side of the field and beating Simoni Lawrence on the edge for a seven-yard gain. A costly roughing the passer penalty on the next play set up first-and-goal at Hamilton’s two-yard line.

Hamilton’s defensive front held strong to shut down back-to-back QB sneaks from Kai Locksley, but the Elks went for it on third down and Locksley capitalized by finding a whole on the left side for the touchdown. Sergio Castillo’s extra point attempt went wide, leaving Hamilton with a three-point lead at 9-6.

The Ticats answered immediately with Woods returning the kickoff for a highlight-reel 72-yard touchdown to erase Edmonton’s momentum. Domagala kicked the extra point to put Hamilton up 16-6 entering the second quarter.

A big sack on second down from Ticats defensive lineman Dylan Wynn derailed a promising Elks drive early in the second, leading Edmonton to attempt a 59-yard field goal. Castillo’s long attempt went wide, but the Elks added a single point after the missed kick was downed in the end zone.

The Ticats extended their lead with a 25-yard field goal from Domagala late in the quarter, but a big 60-yard punt from Matt Mengel led to Hamilton conceding a safety on their next drive.

Hamilton defensive back Kameron Kelly helped close out the half by picking off Ford, as he stretched out to make a beautiful leaping interception on a pass intended for Derel Walker.

Momentum shifted in Edmonton’s favour on the next drive when middle linebacker Brady Sheldon intercepted a short Evans pass that deflected off the hands of running back Sean Thomas-Erlington. The Elks converted the turnover into a 32-yard field goal from Castillo to make it a one-score game heading into the fourth quarter.

The Elks defence stepped up again early in the fourth, as linebacker Matthew Thomas picked off Evans on another deflection. Ford capitalized on the turnover by throwing a 10-yard strike to Lawler for his first career CFL touchdown pass, and Castillo tied the game at 22 points apiece with the extra point.