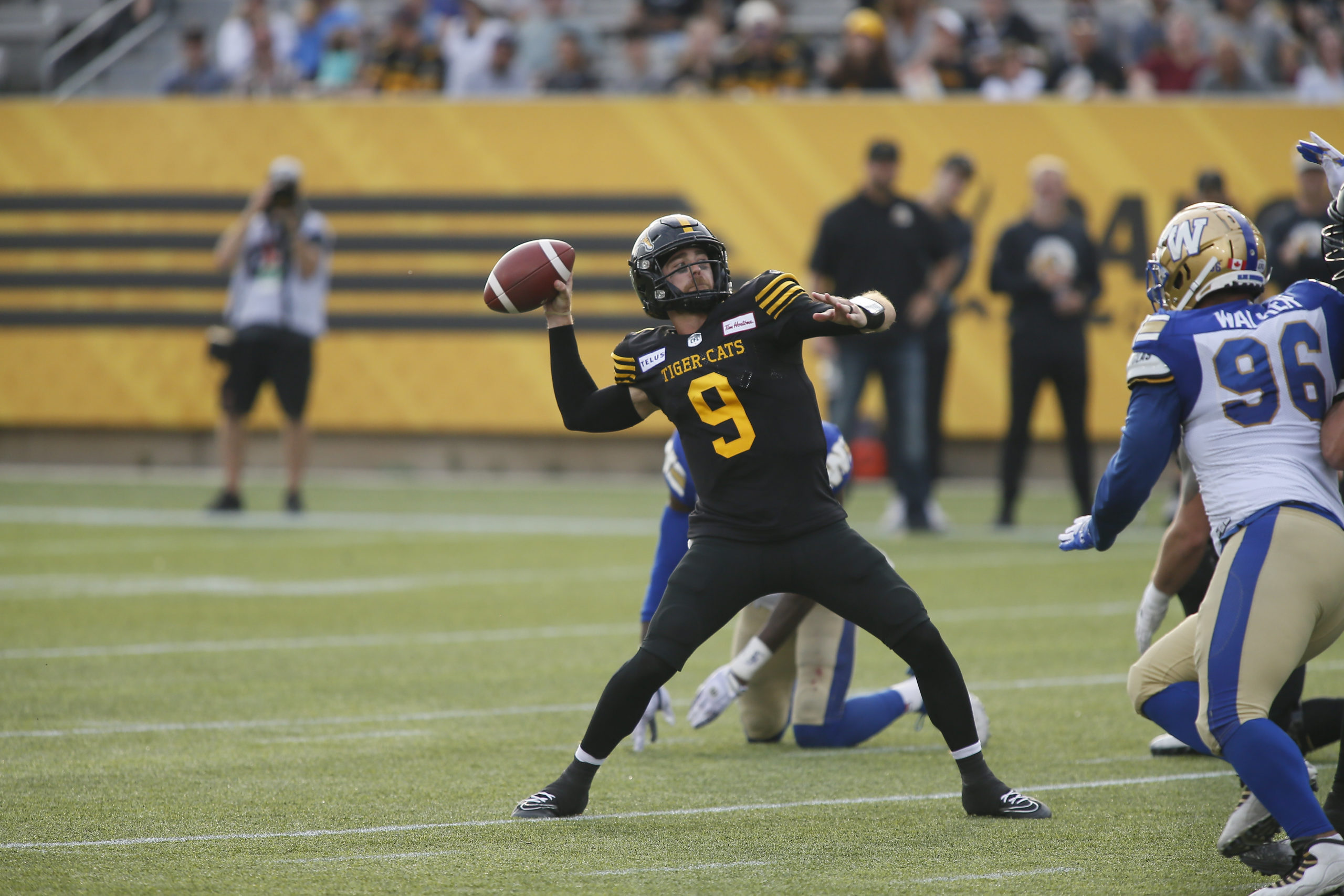 HAMILTON — The Hamilton Tiger-Cats snapped a three-game losing streak with a 48-31 win over the Winnipeg Blue Bombers from Tim Horton’s Field. The win makes Hamilton just the second team to top the defending Grey Cup Champions this season.

Making his return to the lineup for the first time since Week 12, quarterback Dane Evans had an outstanding performance as he set a new career-high in passing touchdowns, throwing with five majors as he completed 25 of his 32 passing attempts for 327 yards in the team’s win on Saturday.

Tim White and Steven Dunbar Jr. were the key contributors in the Hamilton offence, stressing the Bombers secondary and finding ways to exploit their zone coverages. The pair of Tabbies playmakers combined for 129 yards and three touchdowns on 12 receptions.

The Hamilton defensive unit was instrumental in the team’s win on Saturday, applying relentless pressure all game they recorded two sacks in the game and two interceptions, with their biggest play coming from a sack-forced-fumble by defensive lineman Malik Carney which he returned for a touchdown.

Evans looked eager to be back on the field for the Ticats on their opening drive, completing his first three of his first four passing attempts for 29 yards.

While Evans and the Ticats would be held out of the end zone, Hamilton would still find points with the game’s opening drive. Kicker Seth Small line up a 52-yard kick and split the uprights on the long-range attempt, giving his team the early lead.

It wouldn’t take the Bombers offence long to respond, with his first three targets in the game Rasheed Bailey broke loose for 47 yards, helping to put his team well within striking distance.

Standing on the Hamilton eight-yard line, Zach Collaros was forced  out of the pocket by the Hamilton pass-rush, but still delivered a strike to Nic Demksi in the end zone, capping off a seven-play scoring drive and giving the Bombers a 7-3 lead.

The Ticats offence didn’t let the score from Winnipeg discourage them, Evans called his own number to convert a tough quarterback sneak on third down. He then completed a 44-yard pass to fullback Felix Garand-Gauthier, to set up a score.

Two plays later, the Hamilton pivot delivered a pin-point pass to Tim White in the back of the end zone for an eight-yard touchdown, as Hamilton regained the lead midway through the first.

With under five minutes remaining in the opening quarter, Winnipeg demonstrated their own ability to make plays and strike downfield. Collaros connected with Schoen for a 47-yard completion, putting the Bombers inside the Hamilton 35-yard line.

However, the Hamilton defence would hold strong and force the Bombers to attempt their first field goal of the game. A too many men penalty backed up the attempt, but Winnipeg’s Marc Liegghio had no trouble converting a 27-yard attempt, tying the game to end the first quarter.

Hamilton would find the first points of the second quarter. Evans continued to show confidence as he pushed the ball downfield with his arm, but two straight incompletions halted a promising drive. Small was brought out for his second attempt of the game and the Ticats’ kicker again connected from deep, as he knocked through the 41-yard field goal.

The Ticats defence showed their teeth early in the second quarter as Carney muscled his way into the backfield bringing down Collaros for a sack, the hit also jarred the ball loose for a fumble. Carney managed to recover his own forced fumbled and returned it 22-yards for a score, giving Hamilton a ten-point lead.

Evans and the Ticats offence continued their impressive start as the second quarter carried on. Standing on the Winnipeg 19-yard line, Evans dropped back and threw a beautifully placed ball, finding Dunbar in the back corner of the end zone for the touchdown.

Winnipeg would cut into the Hamilton lead late in the second quarter,  Liegghio converted a 33-yard field goal for his second make of the game.

However, the Ticats would not let their foot off the gas with time winding down in the first half. Needing just two plays Hamilton would find the end zone for the third time in the half. Evans connected with receiver Kiondre Smith for a 54-yard touchdown, to give the Ticats a 34-14 lead entering halftime.

With three touchdowns in the first half, it marks the first multi-touchdown performance from Evans since Week 6.

The Blue Bombers would open the scoring in the game’s second half. Liegghio connected on a 36-yard attempt to cap off a an eight-play scoring drive from Winnipeg that took just under four minutes off the game clock.

Looking to help his team claw back into the game, Collaros fired a pass downfield intended for Demski. Hamilton defensive back Jumal Rolle was was waiting in coverage and make a great break on the ball to intercept the pass. The interception forced by Rolle, would help to set up a score from the Ticats offence.

Evans completed four consecutive passes on the drive, before finding White on a swing pass for his second receiving touchdown of the game. Helping to give the Ticats a 41-17 lead in the third quarter.

The Bombers opened the fourth quarter with a touchdown from Dakota Prukop on a goal line sneak, helping to chip away at the Hamilton lead.. The play from Prukop highlighted a lengthy 13-play scoring drive for Winnipeg, that started with five-minutes and 30-secodns remaining the third quarter.

Winnipeg continued to claw their way back into the game with time winding down on the fourth quarter. Collaros completed three passes to Schoen for 54 yards. In scoring range, Collaros found Bailey for a 14-yard touchdown and his second score of the game, narrowing the Hamilton lead  41-31.

Hamilton seemingly put the game out of reach with just over two minutes remaining in the game. A touchdown reception from David Ungerer highlighted a 14-play scoring drive for Hamilton and took over seven minutes of time away from the Bombers.

The touchdown pass from Evans marked his fifth of the game, setting a new career-high in single-game passing touchdowns for the Ticats’ pivot.

Looking ahead to Week 16 of league action, the Ticats will matchup with the Montreal Alouettes from Percival Molson Stadium with an opportunity to tie Montreal in the East Division standings.

The Bombers will have a bye in the coming week and will return to action for a Week 17 meeting with the West Division rival Saskatchewan Roughriders.