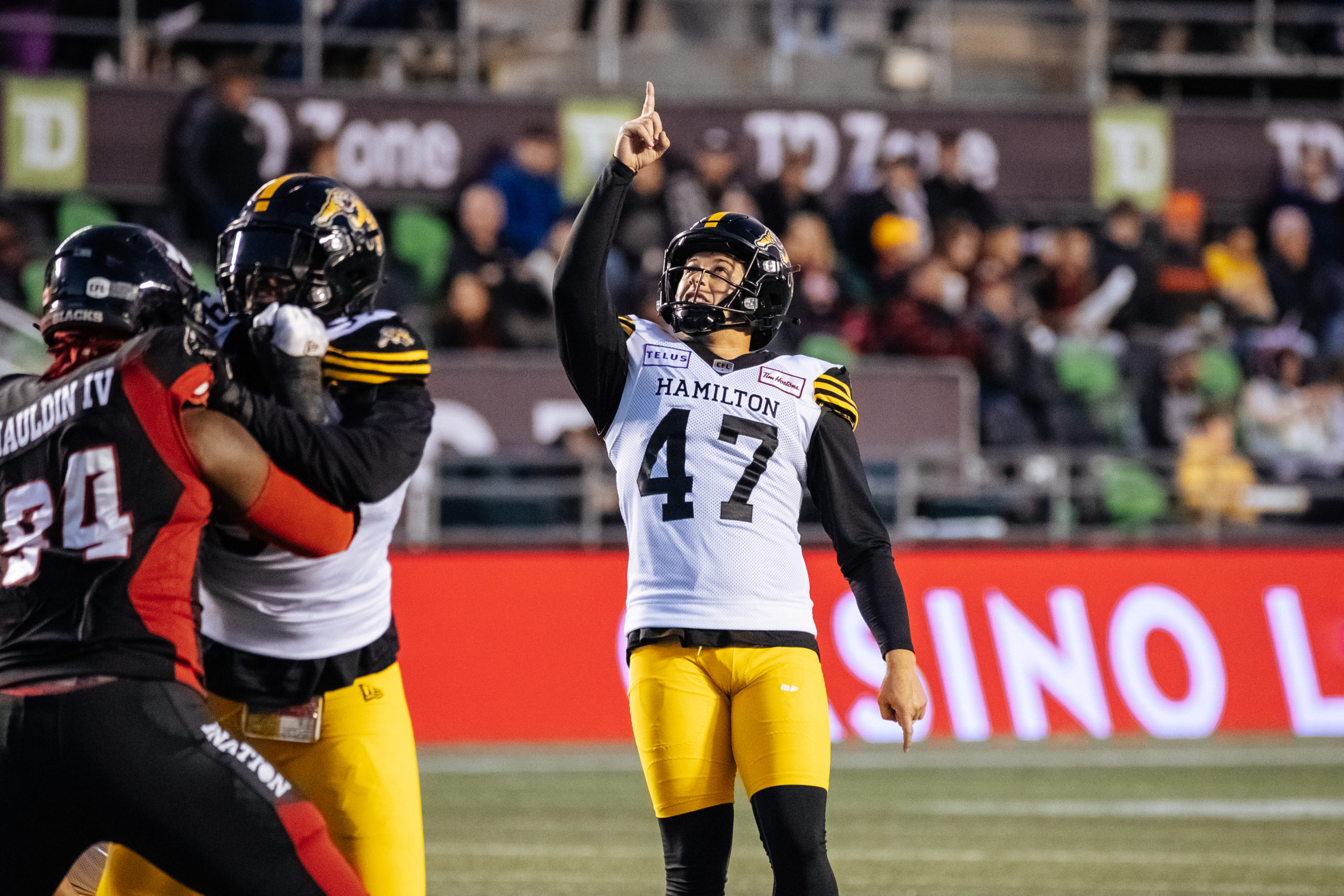 The Hamilton Tiger-Cats will carry a four-game winning streak into the Eastern Semi-Final after downing the Ottawa REDBLACKS 23-16 on Saturday night at TD Place.

The loss closes out Ottawa’s season and extends their home losing streak to 12 games. They finish 2022 with a 4-14 record.

Quarterback Matt Shiltz made the start for Hamilton and completed 12 passes for 144 yards.

In the receiving game, Steven Dunbar reached the 1,000 yard milestone with three catches for 31 yards. Terry Godwin caught five passes for 91 yards to lead all receivers.

Under centre for Ottawa, Caleb Evans threw for 110 yards and rushed for an additional 23 on the ground.

With regulars William Powell and Jackson Bennett both out, running back Brendan Gillanders collected 20 rushing yards on five carries.

Hamilton won the coin toss and elected to receive the ball to open the game. Shiltz then completed three straight passes to Felix Garand-Gauthier and two to Wes Hills to get down to the Ottawa 25-yard line. After Shiltz connected with Godwin for a 24-yard reception to bring them down to the one-yard line, backup Jamie Newman converted on a quarterback sneak to give the Ticats an early lead.

Hamilton and Ottawa would trade scoreless possessions and head into the second quarter with the Ticats leading 7-0.

The REDBLACKS appeared ready to punt early in the second quarter, but kicker Richie Leone faked and found Antoine Pruneau for a 23-yard reception and a first down. Later in the drive the REDBLACKS were faced with third-and-short but Evans delivered on a quarterback sneak. Three plays later, Lewis Ward cut the lead to 7-3 with a 29-yard field goal.

Looking for an answer, Shiltz completed a 10-yard pass to Steven Dunbar that was followed by a 22-yard Hills run. The REDBLACKS’ defence stood tall deep in their own territory and held the Ticats to a 37-yard Seth Smalls field goal.

The REDBLACKS would answer right back on the following possession with a three-play drive that ended in a 51-yard Ward field goal to trim the lead back to four.

The back-and-forth continued late into the second quarter. Shiltz completed a 21-yard pass to Godwin to move across midfield. A 13-yard reception by Tyler Ternowski and a pair of runs by Hills set up a 30-yard Small field goal to help the Ticats regain their seven point lead.

Not going into the half quietly, the REDBLACKS made their way into Ticats territory on the ensuing drive and Ward would split the uprights for a 51-yard field goal to make it 13-9 Ticats heading into the half.

Ottawa opened the second half with the football but went two-and-out.

Dane Evans took over under centre for the Ticats to start the third quarter. He completed his first two passes of the drive before his team was forced to punt.

When Evans made his way back onto the field he led his team on a lengthy drive, highlighted by a 25-yard Sean Thomas-Erlington run and a Godwin reception, that ended in a 40-yard Small field goal to extend the Ticats lead to 16-9.

The Ticats stopped the REDBLACKS on their next two possession and Evans led the offence back down the field early in the fourth quarter. The drive finished with an eight-yard reception by Ternowski and a Newman quarterback sneak for a touchdown.

Rookie quarterback Tyrie Adams came into the game on the following possession and completed his first career pass to Keaton Bruggeling. He then rushed passed midfield to get to the Ticats’ 45-yard line. The drive would end eight plays later with an Evans quarterback sneak for a touchdown.

With five minutes to go in the fourth, Shiltz took back over under centre. Sacks leader Lorenzo Mauldin burst through the Ticats offensive line for his 17th sack of the season to make it second-and-long , eventually forcing a punt.

Adams led his team back onto the field with less than three minutes remaining but they couldn’t convert on a third-and-seven.

The REDBLACKS defence stepped up to force a two-and-out to get their offence the ball back with 1:12 left on the clock. An illegal block call on Ottawa during the punt moved the ball back to their own five-yard line.

Despite a pair of completions by Adams, the Ticats defence kept the REDBLACKS pinned deep and forced a turnover on downs to end the game.

Hamilton now heads to Montreal next Sunday to play in the Eastern Semi-Final.