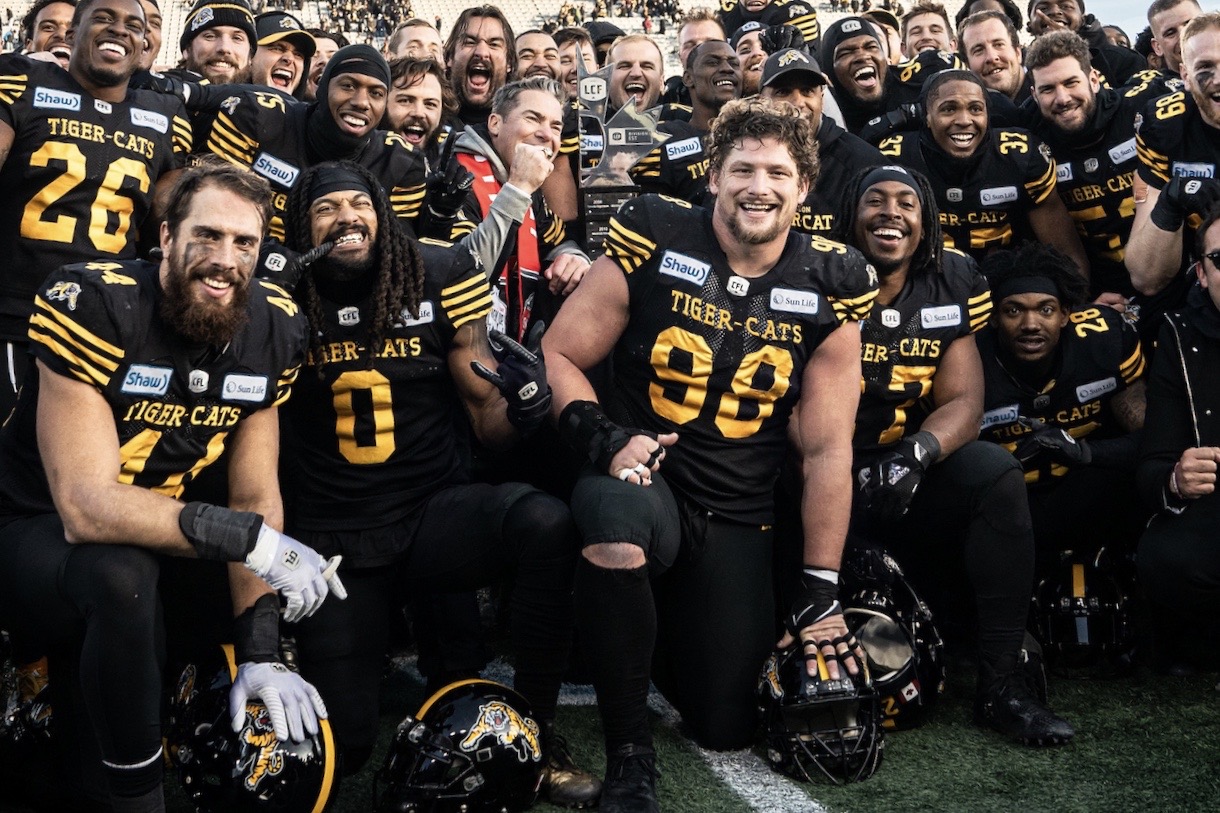 HAMILTON — The Hamilton Tiger-Cats defeated the Edmonton Eskimos 36-16 on Sunday afternoon in the Eastern Final and punched their ticket to the 107th Grey Cup presented by Shaw.

In front of a packed Tim Hortons Field, the Ticats won their first East Division crown since 2014.

The Hamilton Tiger-Cats defence was a major factor in the win, as they collected three turnovers – including interceptions from Richard Leonard and Justin Tuggle and a fumble recovery from Frankie Williams. As a unit, they also held the Esks to just a single touchdown in the ball game and got in behind the best offensive line in the CFL to add three sacks on QB Trevor Harris.

Ticats pivot Dane Evans had an impressive outing in his first playoff start, throwing for 386 yards, a touchdown and an interception. 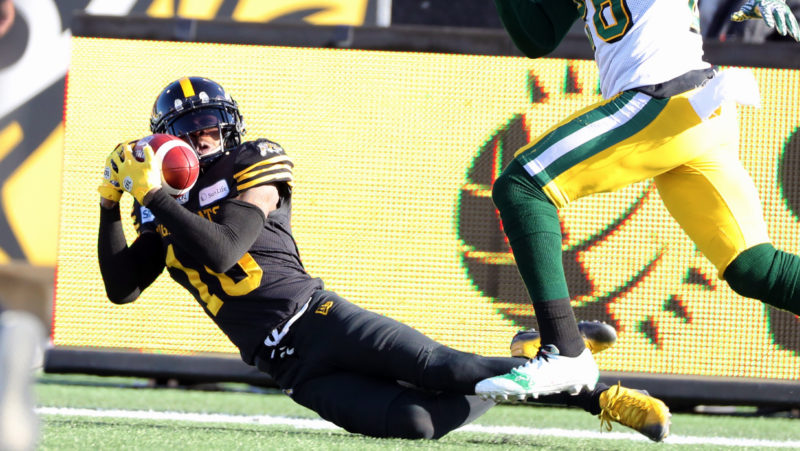 BRANDON BANKS HAULS IN A TOUCHDOWN IN THE FIRST HALF OF THE EASTERN FINAL (GEOFF ROBINS/CFL.CA)

Dane Evans started things off for the Ticats with a 19-yard pass to Bralon Addison but after two incompletions, first to Addison and then Jaelon Acklin, Lirim Hajrullahu had to punt the ball away, bringing Trevor Harris and the Esks offence onto the field.

They weren’t on the turf for long, however, as Richard Leonard snagged the first interception of the ball game, picking off a pass intended for Ricky Collins Jr. on the third play of the Esks’ first drive.

Just as it looked like Edmonton’s defence had held the Tabbies to a two-and-out, Ticats head coach Orlondo Steinauer challenged that there was defensive pass interference on defensive back Brian Walker, who was covering Addison, and it was successful, keeping Evans and co. on the field. Hamilton settled for a field goal to finish the drive, as Hajrullahu was good on his 48-yarder to give the home team a 3-0 lead five minutes into the first quarter.

Hamilton’s defence continued to make things difficult for the Eskimos to start the contest. On the visitor’s first play of the ensuing drive, C.J. Gable fumbled the football and Frankie Williams recovered, bringing Evans and his offence back onto the field and into scoring range.

That turnover turned into points once again for the Tiger-Cats as Evans used Brandon Banks (five-yard gain) and Anthony Coombs (20-yard gain) along with a four-yard run himself to set up backup quarterback David Watford‘s two-yard major score. That touchdown on third down, along with the convert, gave Hamilton a 10-0 lead.

Hajrullhu booted his second FG of the contest with just under two minutes left in the quarter,hitting the 19-yarder and adding three points to the home team’s lead (13-0).

To start the second quarter, DaVaris Daniels scored the first touchdown of the afternoon for the Eskimos, shaking off a tackle from Cariel Brooks and running into the end zone for the major. The 75-yard, eight-play scoring drive, that included a 31-yard gain from Daniels to start things off, cut the Tiger-Cats’ lead to 13-7.

It only took two plays for the Tiger-Cat to score another major, as Brandon Banks showed exactly why he was the East Division nominee for Most Outstanding Player. The Ticats receiver was the only player Evans used on the two-play scoring drive, as ‘Speedy B’ hauled in a 22-yard gain before his 47-yard score, an outstanding grab on the goal line. The score put the home team up 20-7.

Following Hamilton’s first two-and-out of the ball game, Edmonton cut the lead with just over five minutes left in the half. Sean Whyte booted a 49-yard field goal to make it 20-10.

As the Eskimos were driving with the clock ticking down, Harris was moving the chains and put his team into scoring position. Once again, Whyte had to come on the field and kick a 17-yard field goal to cut Hamilton’s lead to 20-13. The 57-yard scoring drive was stopped, thanks to another knockdown from Williams, on the Ticats’ 10-yard line.

The Tiger-Cats weren’t finished scoring in the first half with 30 seconds on the clock. Evans used Coombs, Tasker and Acklin to bring the Ticats into field goal range. Hajrullahu booted a 41-yard field to to add to his team’s lead (23-13) with no time left on the clock.

Hamilton was driving down the field to start the second half and the Eskimos hauled in their first turnover of the ball game as Tyquwan Glass intercepted Evans’ pass intended for Coombs.

Edmonton couldn’t take advantage of the turnover, however, as the Ticats defence held the Green and Gold to a two-and-out. Backed up in their own end zone, O’Neill conceded a safety, adding two more points to Hamilton’s lead (25-13) with eight minutes left in the third frame.

Once again, Hajrullahu had to boot a field goal to finish off a drive for the Tabbies. His 34-yarder sailed through the uprights and added another three points to his team’s lead (28-13).

The defence in black and gold kept their foot on the gas on the ensuing drive. Defensive end Julian Howsare tipped a pass from the Esks pivot and it was middle linebacker Justin Tuggle who snagged the interception. This time the Tabbies couldn’t take advantage of the turnover and were forced to punt the ball back to the Eskimos.

Defensive back Godfrey Onyeka got in on the turnovers for the Eskimos, recovering a Luke Tasker fumble, a fumble that was forced by linebacker Don Unamba. It was the fifth turnover of the ball game and the second for Edmonton of the half.

As Edmonton was trying to move down the field, the Ticats defence held them to a Whyte field goal attempt, scoring three points off the turnover. The Esks’ kicker nailed his 30-yard attempt and cut the Tabbies lead to 28-16.

And on the next drive, Evans had no hesitation throwing down field, using running back Cameron Marshall for a 34-yard gain and receivers Acklin and Banks for 26 yards each, setting up Watford’s second QB sneak TD of the game. That touchdown increased the Ticats lead to 35-16.

The final scoring play of the contest was a single from Hajrullahu to make the score 36-16 and the Tiger-Cats left Tim Hortons Field with the victory.

The Ticats now await the winner of the Western Final between the Saskatchewan Roughriders and Winnipeg Blue Bombers to see who they will play in the Grey Cup next Sunday.