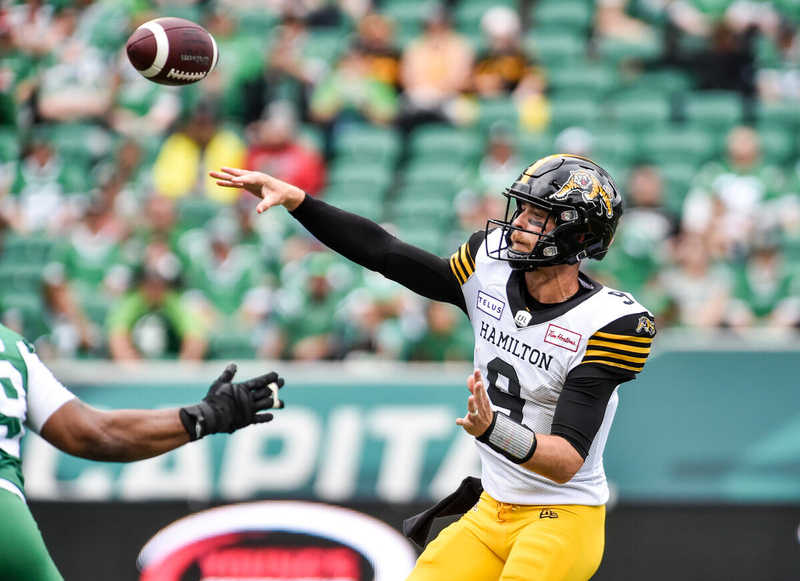 REGINA – It was a defensive battle and a kickers showcase in the Queen City Saturday night as the Riders opened their season with a 30-13 win over the visiting Hamilton Tiger-cats.

It took until the final frame for the majors to come. Hamilton would score the first of the game with a 71 yard touchdown by Steven Dunbar from Dane Evans. Saskatchewan would answer right back with Kian Schaffer-Baker finding the end zone.

Less than a minute later, after capitalizing on an interception by Derrick Moncreif, the Riders would find the end zone again as Fajardo dove across the line. A successful two point convert put the home team up by seven.

Dane Evans recorded a touchdown and two interceptions with over 220 yards.

Brett Lauther went five-for-five as the only points scorer for the Riders through the first three quarters.

Michael Domagala made two of his three attempts through the uprights, including a 52-yard field goal to get Hamilton on the board. 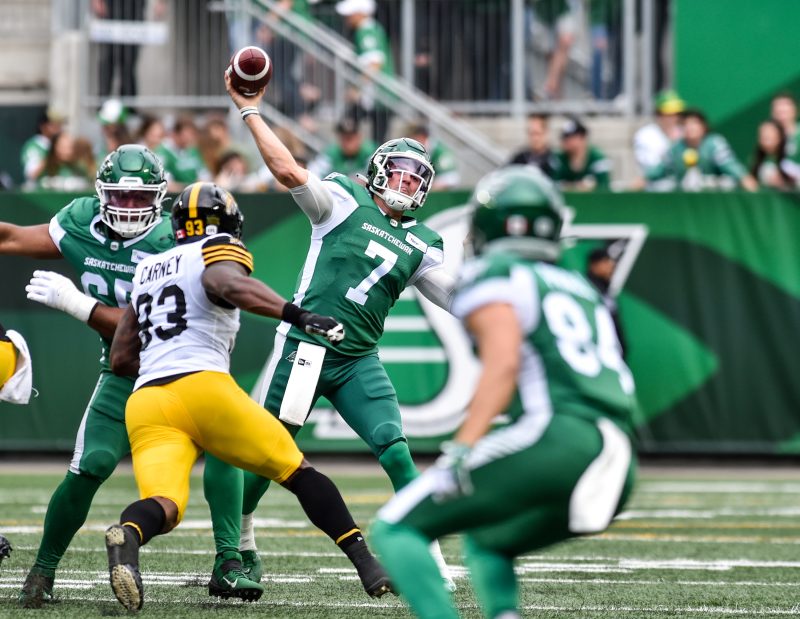 Saskatchewan’s defence set the tone early in the game with back to back turnovers.

Defensive lineman Pete Robertson had a strip sack on Evans on Hamilton’s opening drive. As a result of the turnover, Saskatchewan’s offence would come away with a 13-yard field goal by Brett Lauther.

On Hamilton’s next possession, Nick Marshall intercepted Evans at mid-field.

The defensive battle continued in the opening half, with neither team able to find any kind of rhythm.

Michael Domagala got the Ticats on the board with a 52-yard field goal.

Fajardo connected with Jamal Morrow for back to back plays, including a 30 yard catch and run, to bring the Riders within field goal range.

Lauther re-gained the lead for the Riders with a 48-yard field goal and sent the home team up 6-3  headed into the half.

The second half started the same as the first – with a turnover, this time in favour of the Ticats.

Hamilton would make the most on the opportunity, when Evans found Steven Dunbar at the back of the end zone for a touchdown. The Ticats’ first lead of the game was short lived when a holding penalty was called on the offensive line.

Domagala tied the game with a 25-yard field goal.

On the following drive, Fajardo connected with Shaq Evans for 41 yards and Kian Schaffer Baker showed off circus-like moves as he hurdled over Hamilton defenders.

Saskatchewan was once again held with field goal range as the special teams showcase continued when Lauther lined up for a 30-yarder and took back the Riders’ lead 9-6.

Duke Williams and Fajardo tried to spark the offence with a 24 yard catch but a stingy Hamilton defence forced the special teams unit out once again. Lauther would make it four for four with a 39-yard field goal to put the home team up by six.

In the fourth quarter, the Riders would make it a two possession game with another Lauther field goal, a 41-yarder and fifth of the night.

Hamilton would not go down without a fight, when Evans found Dunbar for a 71 yard touchdown and the first major of the game to cut the lead down to two.

Saskatchewan would answer with their first touchdown, a 20 yard catch from Schaffer-Baker with under three minutes to go.

As Hamilton looked to take back the momentum, Derrick Moncrief had other ideas with an interception at Hamilton’s 40-yard line. Moncrief was taken down at the one yard line which set up Fajardo’s one-yard plunge for the Riders’ second major of the game.

Matt Shiltz came in for the final minutes of the game and ended the game the way they started with a Riders sack.

Next up for the Riders, they hit the road for a date with the Edmonton Elks for Week 2 action.

The Ticats will host the Calgary Stampeders next Friday.