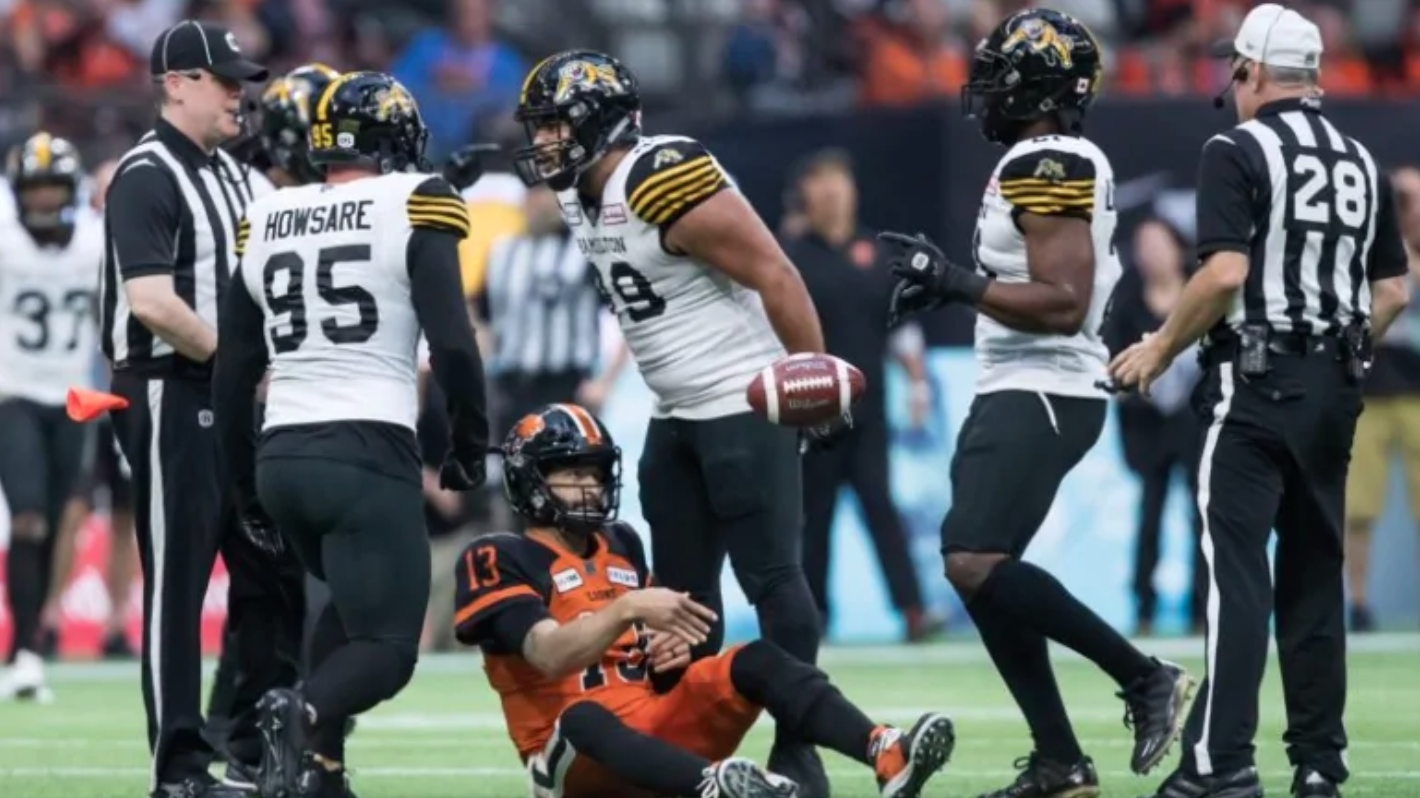 VANCOUVER — Seven sacks and two interceptions helped lead the Hamilton Tiger-Cats to a 13-10 road win over the BC Lions on Saturday night. The Ticats now hold an 8-2 record after winning three straight.

Defence was the story early on with both units coming up with interceptions in the first half. The Ticats created constant pressure up front while getting to Mike Reilly for five sacks in the first half alone, and Hamilton tied the game up on the final play of the third quarter with a 52-yard field goal from Lirim Hajrullahu.

The Ticats capitalized on solid field position after a fake punt attempt from BC came up short in the third quarter, with Dane Evans leading a scoring drive that saw David Watford cap it off with a one-yard rushing touchdown.

Reilly threw a three-yard touchdown pass to Bryan Burnham with under a minute left to help make it a three-point game, but the ensuing onside kick attempt was unsuccessful as BC’s comeback attempt fell short.

Defensive tackle Dylan Wynn had a big game for Hamilton with three sacks, while Ja’Gared Davis notched a pair of sacks. Defensive back Richard Leonard made one of the biggest plays of the game when he came up with a one-handed interception in the end zone to put an end to a promising Lions drive.

Garry Peters notched two interceptions for the Lions, including one with under three minutes to play that helped set up a late BC touchdown.

RELATED:
» Images: Tiger-Cats at Lions
» By the Numbers: View Boxscore
» Watch: Acklin Makes Unbelievable Acrobatic Grab Off of His Own Deflection
» Watch: Leonard Only Needs One Hand For His 2nd INT of the Season

The Lions’ offence was driving down the field in the first quarter after fullback David Mackie hurdled Leonard on a 29-yard catch-and-run, but the drive came to a sudden halt when the Ticats notched their first interception. Reilly was hit by linebacker Justin Tuggle as he threw the ball, and defensive back Rico Murray picked off the pass in the end zone to send the Lions away without any points.

BC began to move the ball again after running back Wayne Moore gained 49 yards on a solid screen play, but a sack from Wynn forced the Leos to settle for a 45-yard field goal from Sergio Castillo to grab the game’s first lead with under seven minutes to play in the second quarter.

An acrobatic 22-yard catch from Jaelon Acklin gave the Ticats momentum towards the end of the half, but the Lions’ defence stepped up with an interception of their own to end the drive when Peters picked off Evans while the quarterback attempted to complete a pass to Brandon Banks.

Hamilton’s defence prevented the Lions from converting the turnover into points, and Hajrullahu made a 52-yard field goal as time expired in the half to even things up at three apiece.

The Ticats took over on downs with great field position in the third quarter after a fake punt attempt from the Lions fell short, as receiver Ryan Lankford was tackled short of the first down after catching a pass from punter Josh Bartel.

Evans then connected with Acklin for a 24-yard gain to move the ball further into BC territory, and Watford took the ball across the goal line on a quarterback sneak four plays later to score the game’s first major. Hajrullahu added the extra point to give Hamilton a 10-3 lead with just over five minutes to play in the third quarter.

Shaq Johnson made a highlight-reel 37-yard catch while being covered by defensive back Frankie Williams to get things rolling for BC on offence, but the drive ended a few plays later when Reilly was intercepted in the end zone by Leonard. Leonard stuck close to Lemar Durant and came up with an amazing one-handed interception.

A big 41-yard punt return from Banks gave the Ticats momentum with under ten minutes to play, and the team managed to add to its lead on a 29-yard field goal from Hajrullahu.

Peters added his second interception of the night down the stretch while covering Acklin down the right sideline, and the turnover led to a late Reilly touchdown pass to Burnham. But the Lions’ comeback hopes came crashing down after the onside kick attempt fell short.

Week 12 will see the Hamilton Tiger-Cats host the Toronto Argonauts next Monday, while the BC Lions will get a week off before facing the Montreal Alouettes on the road in Week 13.