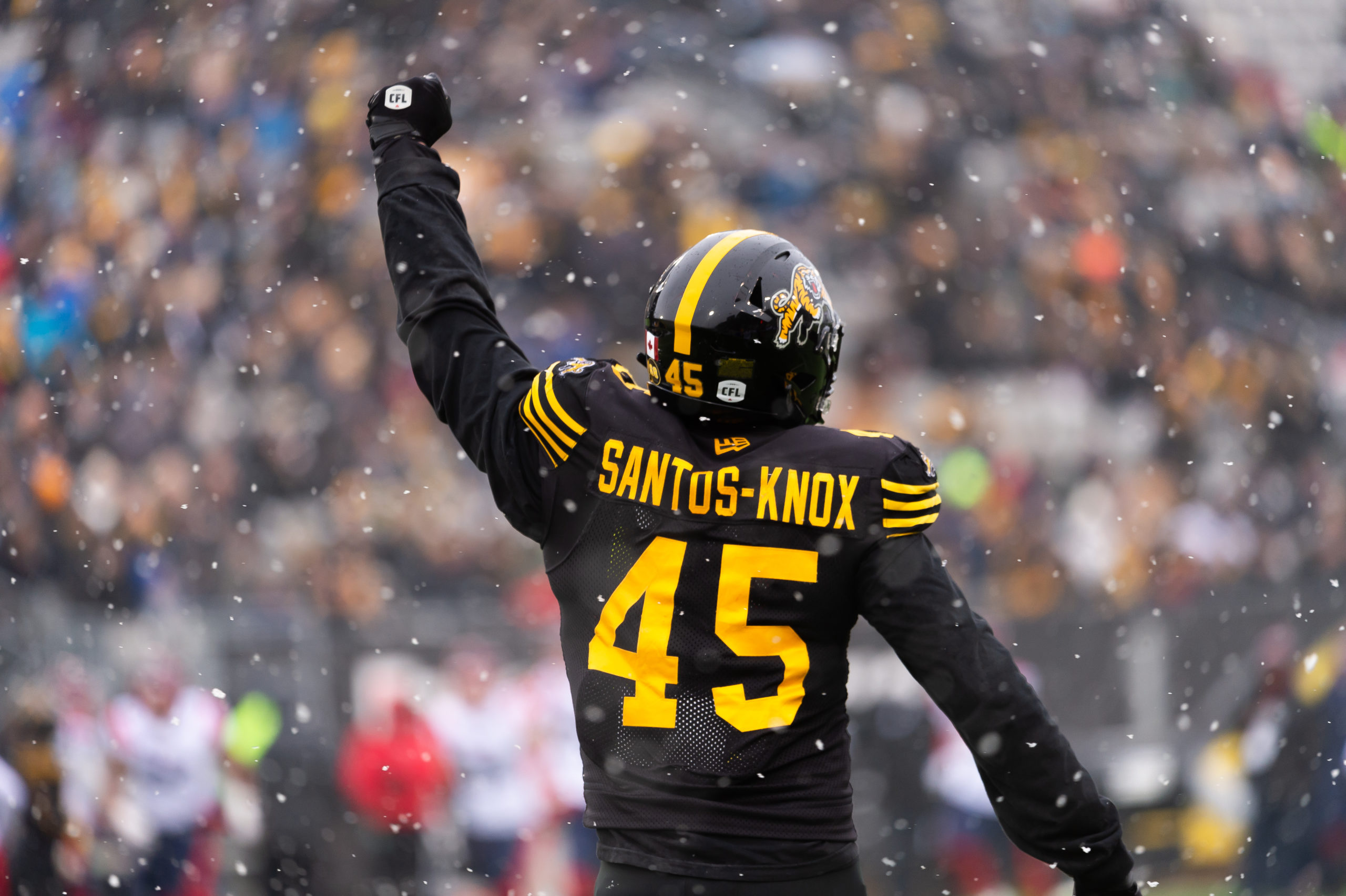 HAMILTON — The Hamilton Tiger-Cats are headed to the Eastern Final.

Thanks to a big second quarter from the Ticats defence that forced three turnovers that led to 13 points, Hamilton defeated the Montreal Alouettes 23-12 in the Eastern Semi-Final and have advanced to the second round of the 2021 CFL Playoffs.

Brandon Banks and Don Jackson scored touchdowns in the victory while Julian Howsare had a fumble recovery and a sack, Stavros Katsantonis had an interception, Ja’Gared Davis had two sacks and Dylan Wynn also had a quarterback take down.

Eugene Lewis scored the lone touchdown for the Alouettes while David Cote was good on his single field goal attempt.

RELATED
» Boxscore: Ticats, Als by the numbers
» Though the Lens: Eastern Semi-Final Pre-Game Images
» More Images from Montreal at Hamilton 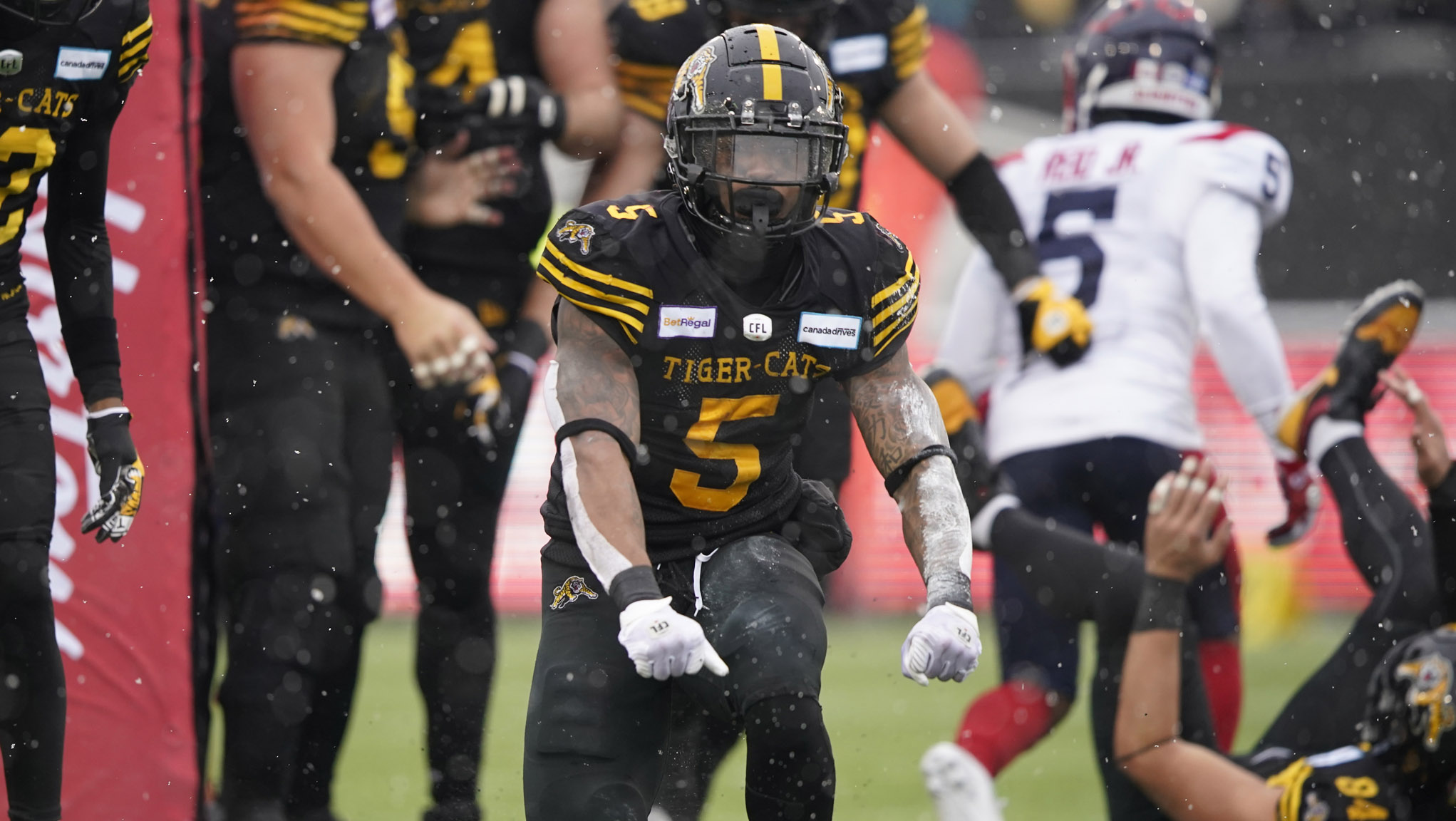 Jeremiah Masoli and the Tiger-Cats offence hit the field first on the snowy Sunday afternoon. After three-straight handoffs to Don Jackson start things off, an incompletion that was targeted for Steven Dunbar Jr. on second and eight stalled the drive and the Ticats had to punt the ball away.

That brought Trevor Harris and co. on the turf for the Alouettes opening possession as they started on their own six-yard line. William Stanback began things for the Als with a four-yard rush, followed by a 15-yard gain from Quan Bray. A flag on Dylan Wynn for roughing the passer on the next play moved the chains 15 yards in Montreal’s favour.

Montreal continued to drive down the field as Harris spread the ball around to Stanback, Jake Wieneke, Bray and Kaion Julien-Grant. Wynn was flagged for roughing the passer for the second time on the drive, moving Montreal to Hamilton’s 15-yard line. But the Ticats defence held strong, as Ja’Gared Davis took down Stanback on second and short and forced Montreal to kick a field goal.

The 95-yard, 13-play drive capped off with a 17-yard field goal from David Cote, giving Montreal an early 3-0 lead with just over five minutes left in the first quarter.

After going two-and-out on Hamilton’s ensuing possession, Montreal’s next drive was also stalled and the team had to punt the ball away as the quarter came to a close.

The Ticats started the second quarter on second and seven deep in their own zone. Masoli connected with Acklin for a 19-yard gain before. Jackson rushed for two yards on the next play. Masoli then couldn’t find a receiver and Hamilton had to punt once again.

Hamilton’s defence held strong on Montreal’s next possession, forcing the Als to punt. But with a roughing the kicker penalty against Hamilton on the kickoff, Harris and co. were awarded with a fresh set of downs.

Julien-Grant had a big play for the Alouettes offence, a 28-yard gain on second and long, moving Montreal to Hamilton’s side of midfield. But just when Montreal looked to be gaining some momentum, the Ticats defence had other plans. Ted Laurent forced Harris to fumble and Julian Howsare scooped up the football and rumbled down the field 45-yards to Montreal’s 22-yard line.

Hamilton made the Als pay for the turnover, as Masoli found Brandon Banks in the corner of the end zone for the first touchdown of the afternoon. Michael Domagala was good on his point after and the Tabbies took a 7-3 lead with just over six minutes left in the half.

The momentum continued to swing the black and gold’s way, as the Ticats defence held Montreal to a two-and-out on their next possession.

Masoli looked to Banks once again, who hauled in a 22-yard catch and run, followed by an eight-yard gain from Acklin. The Tiger-Cats pivot then called his own number for the fresh set of downs on second-and-two. After a two-yard rush from Jackson, the Alouettes were penalized for roughing the passer, moving Hamilton half the distance to goal and an automatic first down at the three minute warning.

That’s when Jackson pushed into the end zone for the Ticats second touchdown of the afternoon. The score capped off a 53-yard, six-play drive and along with the point after, Hamilton increased their lead to 14-3.

Hamilton’s defence kept causing pressure on the Alouettes, as Ja’Gared Davis caused Harris to fumble and Wynn recovered. That brought Masoli and the offence back onto the turf.

Once again Hamilton made Montreal pay for the turnover, scoring three points before halftime. Two passes and two penalties moved the Tabbies into field goal range and Domagala connected on his 38-yard attempt. That increased the home team’s lead to 17-3 with a minute left in the half.

Harris and co. attempted to make something happen before heading to locker room but the Tabbies defence continued to flex their muscles. Stavros Katsantonis, who started at safety due to Tunde Adeleke filling in at halfback for an injured Ciante Evans that was scratched pre-game, picked off the pivot for his first interception of the season.

Hamilton once again cashed in on the turnover, adding another field goal to their lead as Domagala was good on his 37-yard attempt. That score increased his team’s lead to 20-3 as time expired.

The second half started with the teams trading punts but it was Montreal who scored the first points after the break.

On Montreal’s second possession of the third quarter, Harris connected with Lewis for a 46-yard gain to move to Hamilton’s side of centre. After a pair of Stanback rushes, the Als went for it on third down and Harris found Wieneke for the first down. Harris then aired it out to Lewis in the end zone for the 28-yard touchdown. Along with Cote’s completed convert, Montreal cut Hamilton’s lead to 20-10.

There was no more scoring for either team for the rest of the third quarter.

As the fourth quarter began, the Ticats offence began to move the chains into Alouette territory. Jackson hauled in a seven-yard pass from Masoli while Banks caught a 16-yarder. After a loss of a yard from Sean Thomas Erlington, offensive lineman Chris Van Zeyl was called for a 10-yard holding penalty and then Masoli was sacked by Marc Antoine Dequoy, forcing Hamilton to punt the ball away.

The teams then traded a pair of two-and-outs each as the fourth quarter progressed.

Papi White fumbled on a punt return and it appeared that Montreal had recovered. Hamilton head coach Orlondo Steinauer challenged that there was no yards on the play and it was successful, negating the turnover.

The Ticats then took over on Montreal’s 40-yard line with just over five minutes left in the contest. Following a four-yard run from Jackson, Masoli found Tim White for a gain of 29. Masoli then targeted Thomas Erlington twice, the first was a completion for two yards and the second was an incompletion. Hamilton had to settle for a field goal and Domagala was good on his 17-yard attempt, increasing Hamilton’s lead to 23-10 with 3:06 left.

As time was ticking down on the clock, the Alouettes were moving the chains looking to claw their way back into the game. Lewis hauled in a 29-yard pass moving Montreal down to Hamilton’s nine-yard line. Harris attempted to find two receivers in the end zone but both were covered well by Hamilton defenders and fell incomplete. Then on third-and-nine Montreal went for it but once again, the Ticats defence was right there and it was a turnover on downs.

The Ticats gave up the safety to add two more points for the Alouettes (23-12).

Hamilton’s defence continued to put presser on Harris late in the game, as Wynn got to the Als quarterback and caused a fumble that was recovered by Laurent.

Masoli and co. hit the field to kneel down as the clock ran out.

Next up for the Hamilton Tiger-Cats is the Eastern Final against the Toronto Argonauts on December 5 at BMO Field while the Montreal Alouettes will set out to start their off-season.