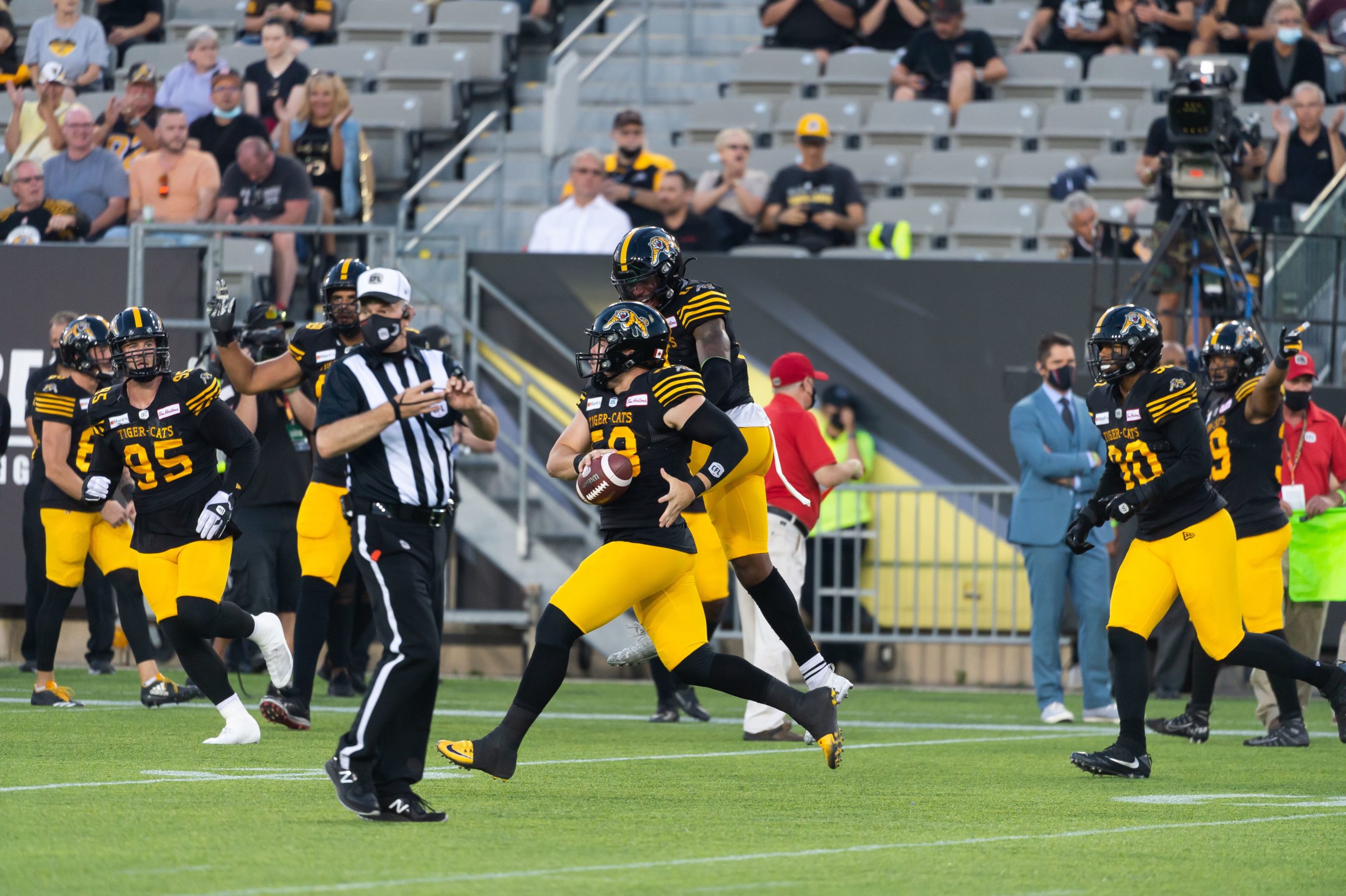 News
TICATS CAPITALIZE ON TURNOVERS TO TAKE DOWN STAMPS
September 17, 2021

HAMILTON — Simoni Lawrence notched his second pick-six of the season and Taylor Bertolet added five field goals to help the Hamilton Tiger-Cats claim a 23-17 win over the Calgary Stampeders on Friday night at Tim Hortons field to kick off Week 7.

Hamilton (3-3) overcame the loss of quarterback Dane Evans, with David Watford earning the win in his first career CFL start. Watford completed 86 per cent of his passes for 149 yards while also adding 35 yards on 10 carries.

The opening half was largely defined by special teams blunders from both teams. Both punt return units muffed punts that led to field goals in the first quarter, and another punt return miscue by Calgary (2-5) led to a second Ticats field goal just before halftime.

Both offences struggled to find a rhythm against stout defensive fronts in the first half, but a 74-yard catch-and-run by Calgary rookie Luther Hakunavanhu opened things up early in the third quarter.

The play led to a QB sneak touchdown by Jake Maier that put Calgary on top, but Hamilton’s defence reclaimed the lead later in the third when Simoni Lawrence notched the go-ahead pick-six. Hamilton increased the lead in the fourth quarter with two more field goals by Bertolet.

Maier took over under centre for Calgary to finish the game and threw a five-yard touchdown to Richie Sindani with 16 seconds left, but the Stamps were unable to recover the onside kick.

RELATED
» Through the Lens: Stampeders at Tiger-Cats
» Boxscore: Ticats, Stamps by the numbers
» Watch: Stamps’ rookie goes 74 yards on 1st CFL catch to set up TD

The Stampeders turned the ball over on special teams in the opening quarter when former Ticat Richard Leonard fumbled a punt return off his facemask. Long snapper Gordon Whyte recovered the fumble to set the offence up in Calgary territory.

While Hamilton failed to pick up a first down on the ensuing drive, a four-yard run by Watford moved the ball close enough for Bertolet to make a 47-yard field goal.

Calgary turned the tables and took advantage of a special teams miscue on the next drive, as Hamilton return ace Frankie Williams was unable to corral a punt before the ball bounced out of bounds.

The Stamps were awarded possession after a review showed the ball was last touched by Calgary defensive back Ramon Richards, and the turnover led to a game-tying 31-yard field goal by Rene Paredes with under seven minutes to go in the first quarter.

Hamilton recovered another special teams turnover in the final minutes of the second quarter when a Michael Domagala punt went off the facemask of Calgary’s Markeith Ambles and bounced directly into the waiting hands of Hamilton’s Stavros Katsantonis.

Watford and the Ticats’ offence moved the ball into scoring range but were unable to solve the Stamps’ defence, settling for an 18-yard field goal by Bertolet to take a 6-3 lead entering halftime.

Hamilton began to move the chains to start the third quarter following back-to-back first down pickups by Tim White, leading to a 49-yard field goal by Bertolet. But Calgary responded with the biggest offensive play of the day, as Mitchell connected with Luther Hakunavanhu for a 74-yard gain that nearly found the end zone.

Hakunavanhu bounced off Williams and spun away from Tunde Adeleke before gaining an extra 28 yards, with Adeleke dragging him down at the goal line. Maier finished the drive off with the QB sneak for the touchdown, and Peredes nailed the extra point to give Calgary a 10-9 lead.

But Calgary was not in control for long, as the Ticats’ defence pounced on an opportunity to retake the lead later in the quarter.

Mitchell fired a short pass that deflected off the chest of Hakunavanhu and into the hands of Lawrence, who proceeded to power his way to the end zone for the touchdown. Hamilton added two more points on a successful conversion by Maleek Irons on a three-yard run.

Bertolet added field goals of 19 and 33 yards in the fourth quarter while Hamilton’s defence continued to frustrate Calgary with constant pressure, including a turnover on downs.

Facing a short turnaround, Hamilton will host the Ottawa REDBLACKS to kick off Week 8 on Wednesday at 7:30 p.m. ET. Calgary is off next week before hosting the Saskatchewan Roughriders to close out Week 9 on Oct. 2 at 7 p.m. ET.