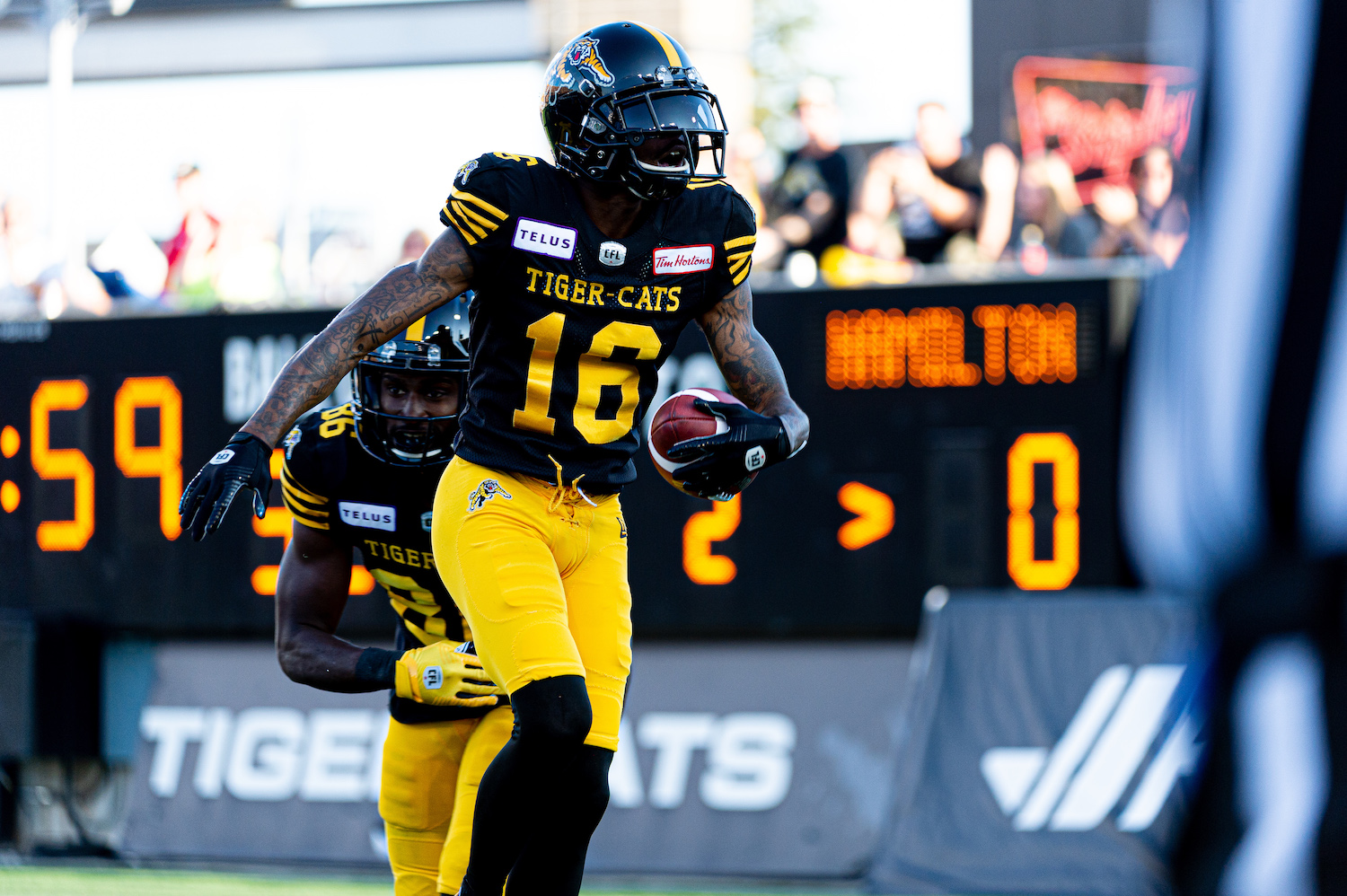 HAMILTON — The Hamilton Tiger-Cats completed a spectacular fourth quarter comeback against the BC Lions on Saturday night, coming out on top in the final minutes with a 35-34 home win. Brandon Banks made his return from injury and led the way with nine catches for 137 yards and two touchdowns as the Ticats improved their record to 6-2.

Banks returned from injury and made an impact right away for the Ticats on the opening drive with a 32-yard touchdown catch, but Mike Reilly and the Lions answered back later in the first quarter with a 47-yard touchdown pass to Burnham.

The Ticats extend their lead with a field goal in the second quarter, but BC grabbed their first lead of the night on a 20-yard touchdown run from John White IV. Momentum quickly swung the other way when Frankie Williams returned the ensuing kickoff for a 108-yard touchdown, giving the lead right back to Hamilton.

The Lions reclaimed the lead just before half-time after an acrobatic catch from Burnham set up White’s second rushing touchdown, and BC extended its lead after the half with a one-yard rushing score from Reilly. BC began to pull away after Burnham hauled in his second touchdown grab, but the Ticats stormed back in the final minutes with Banks’ second touchdown catch.

White carried the ball 15 times for 124 rushing yards in one of his best performances this season, and Burnham had another solid game for BC with 118 receiving yards on six catches. 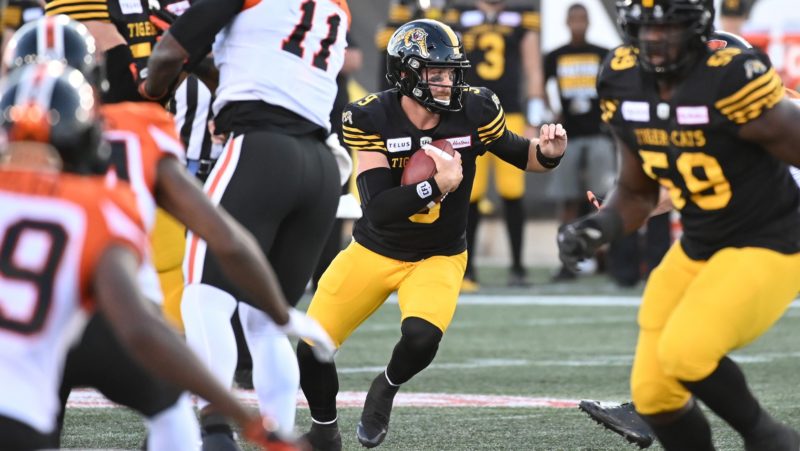 Bralon Addison helped the Ticats get into scoring range on the opening drive with a 23-yard run off a direct snap, and Banks finished the drive off with a touchdown catch after getting open down the seam. Banks then added the two-point convert catch to give Hamilton an early 8-0 lead.

Ryan Lankford returned the ensuing kickoff 29 yards to give BC’s offence good starting position, and Reilly responded a few plays later by airing it out to Burnham for a 47-yard touchdown. The Lions’ two-point convert pass attempt fell incomplete, leaving Hamilton with a two-point lead.

The Ticats pulled off a surprise trick play in the second quarter when the team set up for a field goal before switching it up at the last second and pulling off a successful onside punt. Valentin Gnahoua recovered the ball for the Ticats, but the Lions’ defence stood tall to force a 10-yard field goal from Lirim Hajrullahu that gave Hamilton an 11-6 lead.

Receiver Lemar Durant got things going for the Lions on the next drive with a 28-yard catch-and-run, and BC answered the call once again by grabbing their first lead of the night on a 20-yard touchdown run from White. Sergio Castillo kicked the extra point through to put BC up 17-13 with six minutes to go in the first half.

But BC’s lead was short lived, as Williams turned on the jets and returned the ensuing kickoff 108 yards for the go-ahead touchdown. Evans completed the two-point convert pass to Luke Tasker to give Hamilton a 19-13 lead.

An impressive 36-yard catch by Burnham down the sideline set BC up to respond before half-time, with the Lions receiver somehow getting both feet down in bounds. White then scored his second rushing touchdown of the night on a two-yard run, and Castillo added the extra point to give the Lions a 20-19 lead.

The Lions added another point on the following kickoff when the Ticats conceded a single, giving BC a two-point lead heading into the third quarter.

White got things rolling for the Lions in the second half with his longest rush of the night, a 25-yard gallop that gave BC added momentum. A 19-yard catch from Burnham helped set up a one-yard rushing touchdown from Reilly to cap off the drive, and Castillo booted the extra point through to give the Lions a 27-19 lead.

BC’s defence then continued to frustrate the Ticats’ offence and forced another punt. The Lions then proceeded to drive down the field once again for another score, with Burnham reaching the end zone for the second time on a four-yard touchdown catch from Reilly. Castillo added the convert to put BC up 34-19 at the start of the fourth quarter.

Hamilton made things interesting late with a clutch drive that saw a 27-yard catch from Banks set up a one-yard rushing touchdown from backup quarterback David Watford, but Hajrullahu missed the extra point and left the Lions with a six-point lead with just over three minutes left.

An electric 57-yard punt return from Williams gave the Ticats life in the game’s final minutes, and Evans found Banks for a 23-yard touchdown to even the game up. Hajrullahu kicked the extra point to give Hamilton a one-point lead with a minute to play.

Week 10 will see the BC Lions face the Winnipeg Blue Bombers on the road next Thursday, while the Hamilton Tiger-Cats will go up against the Ottawa REDBLACKS next Saturday on the road. 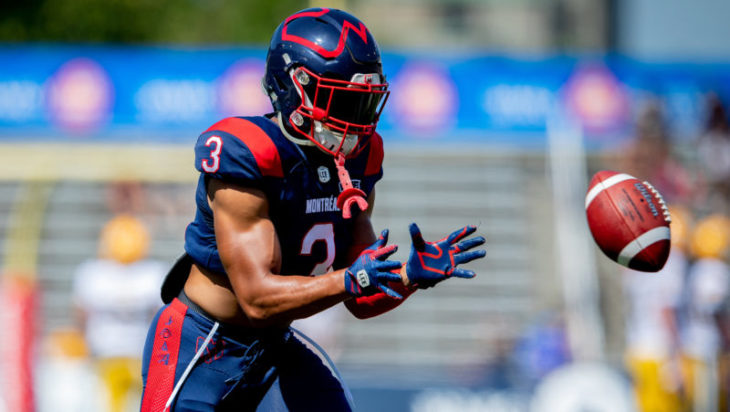