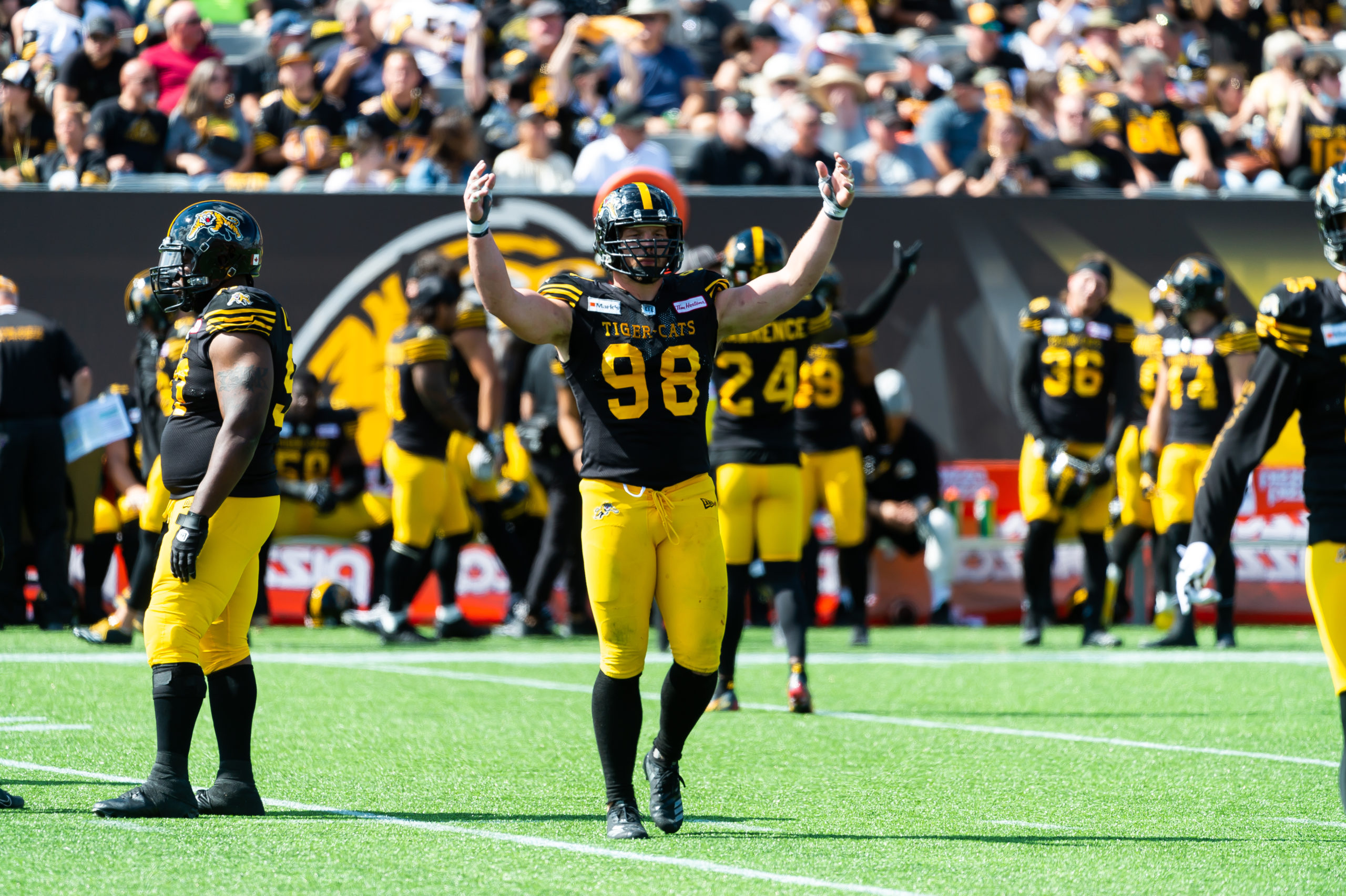 by
CFL.ca Staff
HAMILTON — Dane Evans passed for two touchdowns and Simoni Lawrence notched a pick-six as the Hamilton Tiger-Cats defeated the Toronto Argonauts 32-19 for a Labour Day Classic victory in the first game at Tim Hortons Field in 659 days.

The long-awaited home opener was the 50th Labour Day matchup between the Ticats and Argos, and the win gives Hamilton control over first place in the East Division. It was the first of four meetings between the two rivals this season.

The Ticats led 10-4 entering halftime following David Ungerer’s first CFL touchdown catch, and they took control in the third when Frankie Williams surged up the field for a 67-yard punt return touchdown.

A 57-yard touchdown grab from Tim White and a two-point conversion from Jaelon Acklin gave Hamilton a 25-4 lead entering the fourth, but Toronto inched closer after Eric Rogers secured his first touchdown catch as an Argo.

Lawrence’s interception for a touchdown served as the knockout punch, as a late touchdown pass from McLeod Bethel-Thompson ended up being too little too late.

The Ticats’ offence marched down the field on an opening drive that was sparked by a 35-yard deep shot to Acklin. Evans was almost intercepted by Toronto’s Shaquille Richardson on the following play, but Hamilton then proceeded to move the chains with first down pickups from Ungerer and Brandon Banks.

The Ticats were knocking on the door at the six-yard line, but they came up just short of a touchdown when White was unable to secure a pass from Evans in the end zone. Hamilton opted to settle for a 13-yard field goal from Michael Domagala to take the early lead.

Hamilton’s defence solidified the early momentum on the Argos’ opening drive, as Cariel Brooks made a tremendous interception at the sideline after Rogers fell down while making a cut on his route. The Ticats were unable to capitalize on the turnover.

Rogers drew a 15-yard pass interference penalty on Toronto’s next drive, and the Argos began to find success moving the ball. Arbuckle connected with D.J. Foster for 12 yards to move into Hamilton territory, and DaVaris Daniels followed it up with an 18-yard catch-and-run to close out the first quarter.

The Argos’ drive stalled two plays later after a costly roughness penalty, but Toronto got close enough for Boris Bede to tie the game with a 32-yard field goal.

Evans responded by connecting with Banks to propel the Ticats into Argos territory, with the quarterback rolling out to his right and throwing a 34-yard strike on the run.

Banks nearly caught a touchdown just a play later until the ball was dislodged by a hard hit from Treston Decoud. Banks was momentarily shaken up on the play after getting the wind knocked out of him.

But the Ticats retook the lead on the ensuing play when Ungerer made a brilliant play for his first career CFL touchdown.

Evans kept the play alive while scrambling to his left to complete a short pass to Ungerer, and the Ticats receiver took care of the rest by delivering a stiff arm and gaining 15 yards after the catch to reach the end zone. Domagala kicked the convert to put Hamilton up 10-3.

Toronto’s offence picked things up again just before the three-minute warning, with Arbuckle completing back-to-back passes to Kurleigh Gittens Jr. and Foster for first down pickups.

Hamilton’s defence stood strong once again to force a punt, but Toronto added a point when Bede’s 46-yard kick went out of bounds in the end zone for a single.

The Hamilton crowd erupted in the third quarter when Williams took the ball to the house on a highlight-reel 67-yard punt return. Williams made multiple Argos miss while accelerating up the middle of the field to reach daylight, and Domagala added the extra point to give the Ticats a 17-4 lead.

The Ticats kept things rolling later in the quarter when Evans launched a deep pass down the field to White for a 57-yard touchdown. White torched Toronto’s Jeff Richards on the play with a sharp route, and Hamilton added two more points when Evans completed a strike to Acklin for the conversion.

Hamilton extended its lead to 22 points in the fourth quarter when Joel Whitford’s punt went for a single.

Arbuckle completed his biggest pass of the day with a 45-yard toss to Gittens, and he followed it up by finding Rogers for a touchdown. Rogers jumped up to make the grab in tight coverage against Tunde Adeleke, and Bede’s extra point cut Hamilton’s lead down to 26-11 with seven minutes left to play.

Hamilton surrendered another point on the ensuing kick off with Williams taking a knee in the end zone, but the Ticats’ defence would end up sealing the victory minutes later.

A 59-yard punt from Whitford pinned Toronto deep, and Adeleke brought major pressure on a blitz to force an errant throw from Arbuckle. The pass was tipped by Jovan Santos-Knox, and Lawrence caught the deflection before running it into the end zone for the short pick-six. Hamilton was left with a 32-12 lead after Domagala missed the convert.

Bethel-Thompson came in at quarterback for Toronto and proceeded to lead a touchdown drive that was capped off by an eight-yard touchdown pass to Rogers. Bede’s convert cut Hamilton’s lead down to 13 points with two minutes remaining. Bede’s ensuing onside kick attempt went out of bounds.

Hamilton and Toronto face a quick turnaround, as both teams will meet again to kick off Week 6 on Friday at 7:30 p.m. ET.