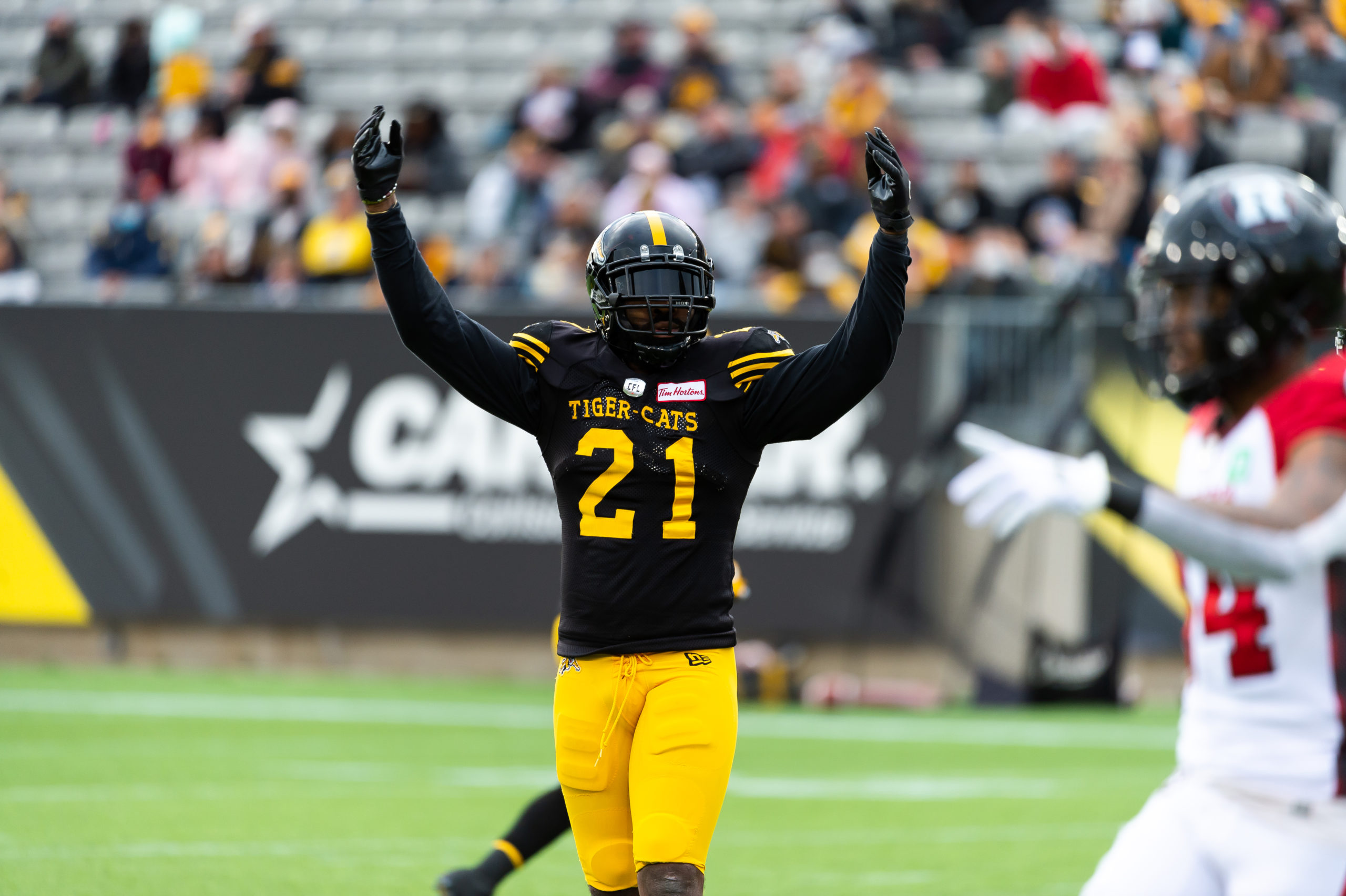 News
TICATS DOWN REDBLACKS FOR FIFTH WIN OF THE SEASON
October 23, 2021

HAMILTON —  The Hamilton Tiger-Cats improved to .500 on the season as they collected their fifth win of the season, downing the Ottawa REDBLACKS 32-3.

It was a quarterback-by-committee type of afternoon for the Ticats and REDBLACKS as they both used their quarterback depth in different situations.

For Hamilton, starter Jeremiah Masoli threw for 320 yards and a pair of touchdowns. Dane Evans found the field and the end zone in short-yardage situations, recording a pair of rushing touchdowns and 17 yards passing yards.

Ottawa too implemented a two-QB system as their starter, Caleb Evans, threw for 138 yards and rushed for 10 yards while Devlin “Duck” Hodges, in his first game as a REDBLACK, tossed for 35 yards with an additional eight coming on the ground.

In his first game back from a stint on the injured list, Brandon Banks, while used sparingly, hauled in three receptions for 43 yards.

RELATED
» Through the Lens: REDBLACKS at Ticats
» Boxscore: REDBLACKS, Ticats by the numbers
» Watch: Desmond Lawrence’s first-career INT sets up a score 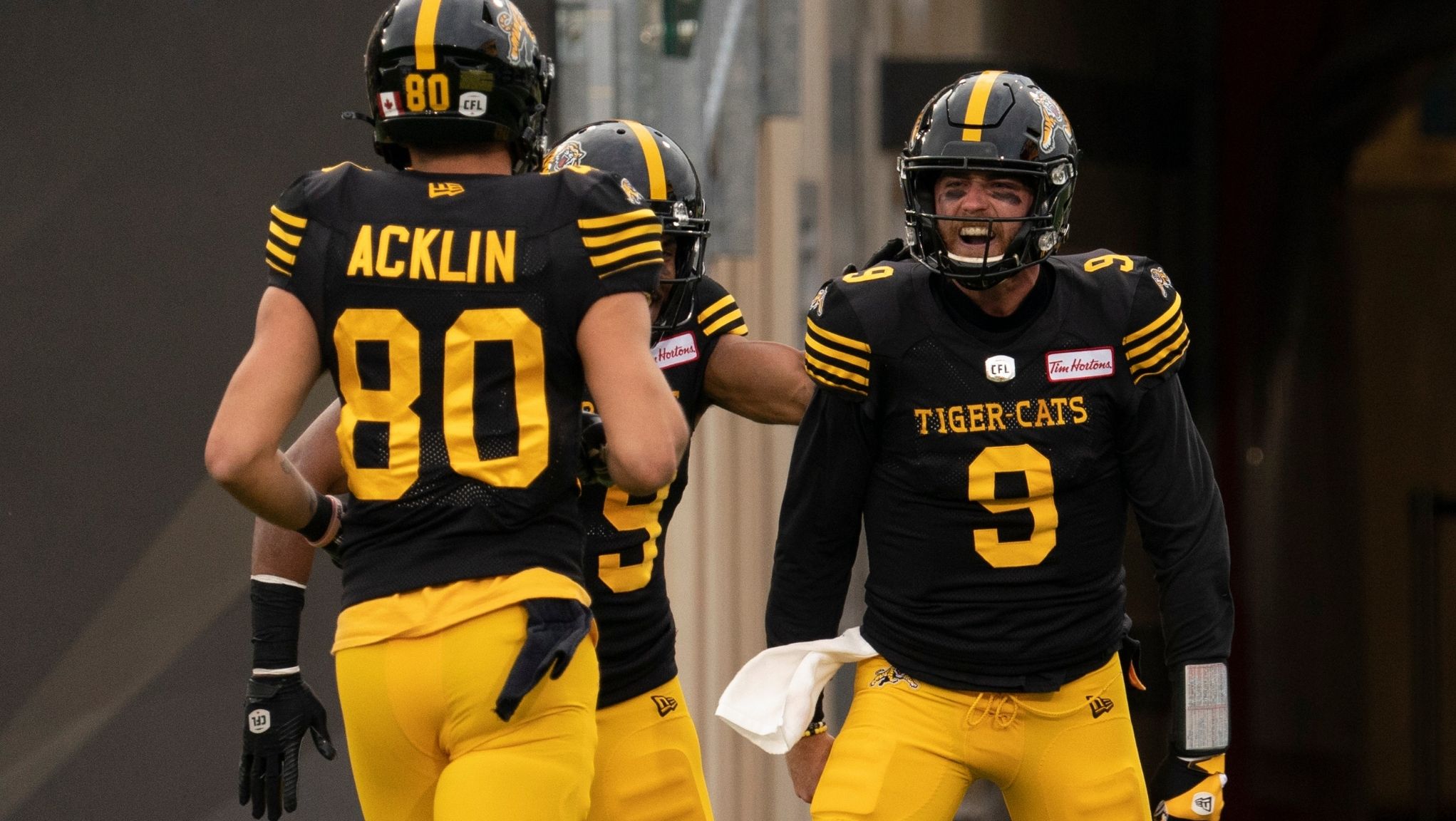 Both teams’ defences stole the show in the opening moments of the contest as they forced multiple two-and-outs, hindering the ability for either’s offence to gain any traction.

That was the case until Evans broke the pattern by collecting the game’s first down with his feet as he scrambled for a 10-yard gain. Evans found Anthony Coombs on the very next play for a nine-yard reception which set the stage for Paul LaPolice to send out his short-yardage package that included Hodges.

Facing a second-and-one, Hodges collected the snap and slipped past his offensive line for another REDBLACK first down. Hodges would stay in for a pair of snaps; the first being an incompletion followed by a three-yard completion to Nate Behar. Their connection would not be enough for a first down and Ottawa was forced to punt.

Hamilton too got things going on the offensive side of the ball on the ensuing possession. Masoli connected with Bralon Addison for the game’s first big gain of 61 yards. Three more completions by Masoli positioned the Ticats on the Ottawa four-yard line.

Facing a first-and-goal now, Evans came in for the Ticats’ short-yardage package and followed the push of his offensive line for the touchdown. Jackson Bennett tacked on an extra two points with a successful three-yard convert run.

Building off the momentum generated on their previous drive, Evans took to the air. Four straight completions, with one by R.J. Harris for 27-yards, spawned a red zone appearance and another Hodges short-yardage package. Back-to-back goal-line stands by the Ticats’ defence forced a field goal attempt from Lewis Ward. As his nine-yard chip shot sailed through the uprights, the REDBLACKS got on the board but were down 8-3.

With under three minutes left to play in the first half, Ottawa was poised to further chip away at their deficit, though Hamilton had other things in mind.

Following a change in possession, Ottawa threatened to score before the end of the half. Working their way down the field from the success of chunk plays allowed the REDBLACKS an opportunity to take the lead. Back-to-back sacks by Julian Howsare would wipe out the possibility of that to happen and Ottawa was forced to punt. Collecting the punt, Hamilton’s offence kept the ball inbounds during the remaining one minute and thirty seconds to take their lead to the locker room.

The second half saw a change in running backs for the Ticats with Maleek Irons injured in the first half, Bennett assumed the rushing responsibilities.

In Hamilton’s first series of the second half, Bennett rushed thrice, only broken up by a lone Masoli completion to Banks before punting.

Hamilton wouldn’t need their offence to accumulate yards as their defence would do it for them. Picking off Evans, Desmond Lawrence gifted the Ticats’ offence with an ideal starting field position. Lining up under centre on the Ottawa nine-yard line, Masoli’s strike to Steven Dunbar resulted in six points. Taylor Bertolet’s point-after-try extended the Ticats to 15-3.

Simoni Lawrence collected the Ticats second interception of the game on the ensuing REDBLACKS drive, picking off Evans and taking it the other way for a pair of yards.

That would be it for Evans’ night as Hodges took over under centre late third quarter.

Both teams would trade possessions late into the fourth quarter until Terry Williams provided a spark for the REDBLACKS with a 49-yard punt return.

Hamilton would counter with a spark of their own on the next play, Cariel Brooks recorded the Ticats’ third interception. Masoli used that spark to cap off the Ticats’ seven-play, 75-yard drive with his second touchdown pass of the day, this time to Acklin.

Evans punched in his second rushing touchdown late in the fourth quarter to seal the Ticats’ win.

The REDBLACKS will kick off next week’s Friday Night Football doubleheader with a game against the Calgary Stampeders at 7:00 p.m. ET. The Ticats will follow at 9:45 p.m. ET when they take on the Edmonton Elks.