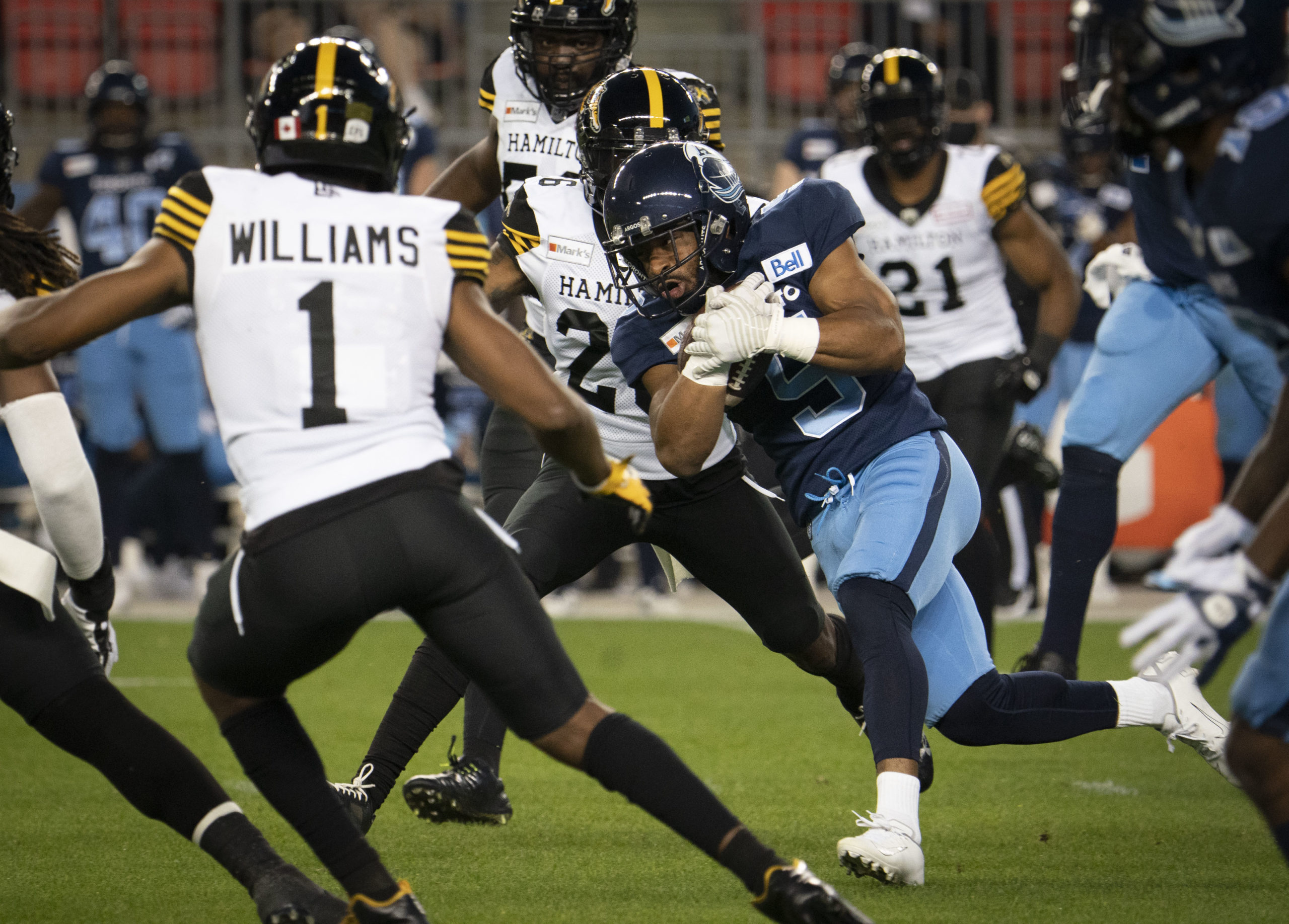 News
TICATS MOVE TO THIRD PLACE IN THE EAST AFTER A CLOSE FINISH
September 10, 2021
TORONTO — The Toronto Argonauts claimed first place in the East Division after holding off the Hamilton Tiger-Cats for a 17-16 win on Friday night at BMO Field to kick off Week 6.

The Ticats were a point away from tying the game in the final two minutes after a 21-yard touchdown run by Sean Thomas-Erlington, but Michael Domagala’s extra point attempt nailed the right upright to deny Hamilton the equalizer.

The Argos now hold a 3-2 record after bouncing back from their 32-19 loss to the Ticats four days prior in the Mark’s Labour Day Classic.

Backup quarterback David Watford entered the game with just over six minutes to play after Dane Evans injured his hip on a sack by Shawn Oakman. Arbuckle threw a late interception that led to the touchdown by Thomas-Erlington, but the Ticats were unable to complete the comeback.

Toronto’s defence generated significant defensive pressure throughout the game and finished with four sacks along with an interception by Henoc Muamba.

The Argos drew first blood on their second offensive drive after a costly Ticats penalty put Toronto in scoring position. The Argos were awarded a first down at Hamilton’s one-yard line after a successful challenge overturned an incompletion due to pass interference.

Hamilton’s Kameron Kelly made early contact while covering Foster, preventing him from getting to a pass near the right pylon. Arbuckle capped the drive off by carrying the ball across the goal line for the score, and Boris Bede kicked the extra point.

Toronto’s momentum grew on the ensuing drive as Muamba picked off Evans on a pass intended for Jaelon Acklin. Relentless defensive pressure forced Evans get rid of the ball early as he tossed his first interception of the season.

The Argos’ offence capitalized on the turnover and moved down the field for another touchdown in just three plays. Chandler Worthy got things started with a five-yard reception, and Arbuckle followed it up by connecting with DaVaris Daniels on a short crossing route for an 18-yard catch-and-run.

Foster then came through with a highlight-reel play on his first touch of the game. Foster received a quick shovel pass from Arbuckle directly after the snap, and the running back proceeded to accelerate through the Hamilton defence into the open field for a 40-yard score.

Foster broke an attempted tackle by Jovan Santos-Knox before dragging Kameron Kelly into the end zone for the touchdown. Bede added the extra point to put Toronto up 14-0.

But the Ticats managed to mount a response with a quick touchdown drive of their own. Papi White gained 14 yards on a catch-and-run after Frankie Williams returned the kickoff 24 yards, and Evans followed it up with a 26-yard completion to Tim White to move the ball into Argos territory.

Papi White finished the drive off two plays later by hauling in a 39-yard touchdown catch, and Domagala kicked the extra point to cut Toronto’s lead in half.

The Ticats’ defence prevented Toronto from adding to its lead before halftime, as Tunde Adeleke secured an interception in the end zone just before the three-minute warning.

Arbuckle sailed a long pass intended for Kurleigh Gittens Jr., but he was draped in coverage by Williams and the ball bounced off his hands and into the grasp of Adeleke.

Toronto got back on track to start the third quarter, with Arbuckle completing five straight passes to help move the offence into Hamilton territory. But the drive stalled when Hamilton forced an incompletion on second down, and the Argos settled for a 26-yard field goal from Bede to extend the lead to 10 points.

The Ticats cut back into the lead in the fourth quarter after a tough 19-yard run from Evans moved the ball into field goal range. Domagala made the 28-yard kick to move Hamilton within a touchdown.

Evans exited the game with an injury after being taken down for a big sack by Oakman. Watford stepped in to replace Evans under centre with just over six minutes left in the game.

But Hamilton’s defence stepped up to fill the gap, as Arbuckle was intercepted by Cariel Brooks as he tossed an errant pass off his back foot. Watford nearly connected with Tim White for a game-tying pass that ultimately fell incomplete, but he managed to extend the drive on third down with an 18-yard connection to Acklin to move the chains.

Thomas-Erlington capped off the drive with a 21-yard touchdown gallop, but the Ticats were left one point away from tying the game.

The Tiger-Cats will kick off Week 7 at home against the Calgary Stampeders next Friday at 7 p.m. ET, while the Argonauts will cap the night off by facing the Saskatchewan Roughriders on the road at 9:45 p.m. ET.