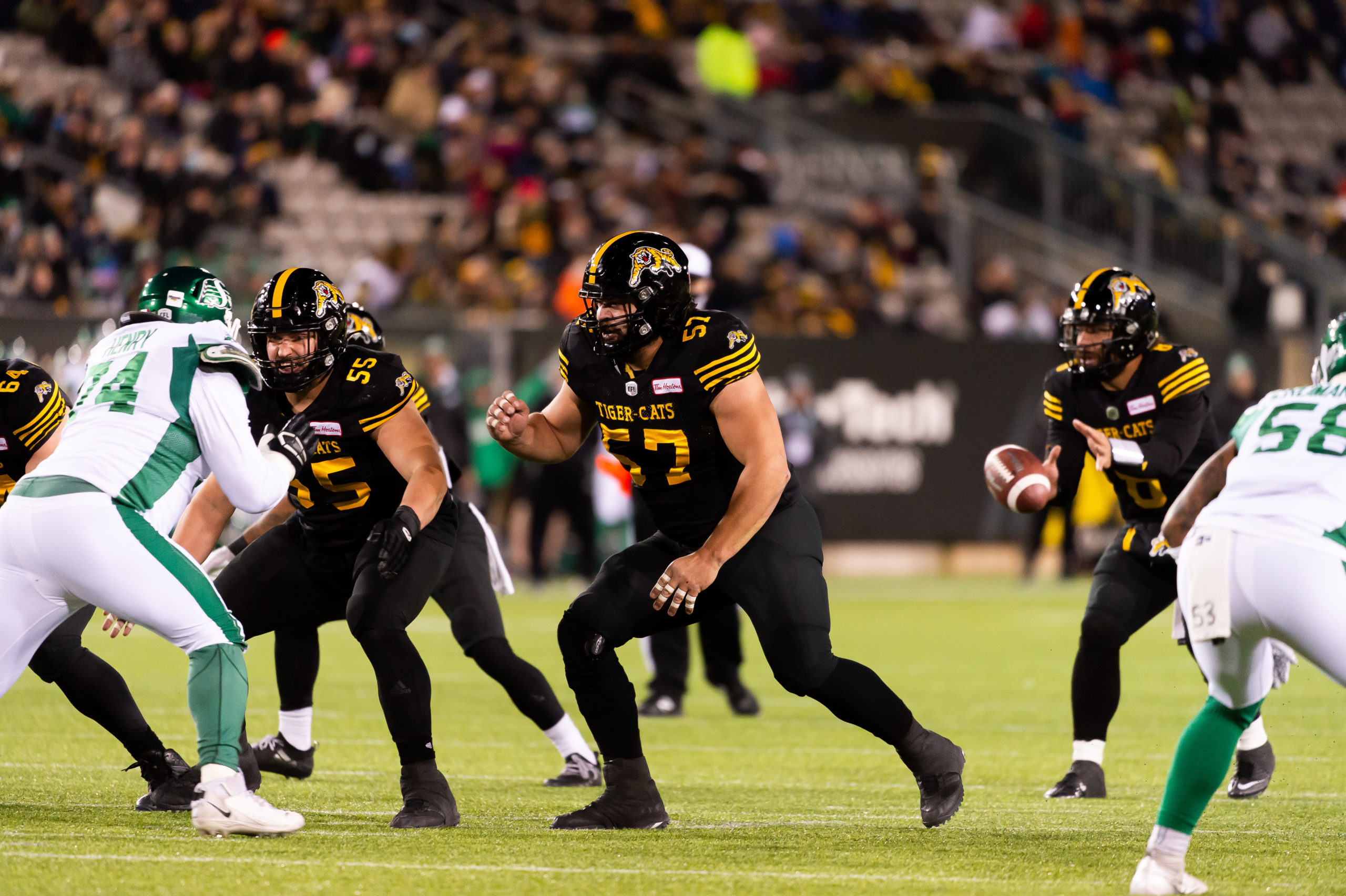 HAMILTON — A week after a disappointing loss, the Hamilton Tiger-Cats ended their regular-season on a positive note, topping the Saskatchewan Roughriders 24-3.

The Ticats got a balanced effort from all three phases of the game. Led initially by their defence, their offence came alive in the second half and helped open up a 24-0 advantage that the Riders were unable to substantially cut into.

The win should help the Ticats put some distance between them and their loss a week ago to the Toronto Argonauts, which gave their rivals in Double Blue a first-place finish in the East Division.

Jeremiah Masoli put that game behind him with a very tidy first half of work for the Ticats, making 17 of his 21 passes for 223 yards and one touchdown.

Dane Evans took over the Ticats’ offence in the second half and made 10-16 passes for 126 yards with a touchdown and a pair of interceptions.

Isaac Harker got the start for the Roughriders, who rested Cody Fajardo ahead of the team’s playoff date next week. Harker was 16-23 for 150 yards with two interceptions. Mason Fine was 5-9 for 64 yards, but left the game with a hand injury in the second half, opening the door for Harker to close out the game.

RELATED
» Through the Lens: Riders at Ticats
» Boxscore: Riders, Ticats by the numbers

Ticats’ kicker Michael Domagala broke the scoreless tie that held for the majority of the first quarter with a 38-yard field goal 13:46 into play. The rest of the quarter was a defensive battle, with both teams trying to pour pressure on the quarterbacks. Hamilton and Saskatchewan ended the first frame of the game with a pair of sacks each.

Fittingly, it was in the midst of all of those defensive plays that Ticats’ veteran linebacker Simoni Lawrence set the franchise record for tackles, when he pulled down Ricard Louis for his 607th tackle as a Tiger-Cat. Lawrence surpassed Rob Hitchcock, who was on the sideline on Saturday afternoon, to claim the record.

The Ticats began to find their offence in the second quarter. Masoli led a lengthy, 14-play march up the field that was capped by him finding Don Jackson for an eight-yard toss that the running back easily took into the end zone. Domagala’s convert made it a 10-0 game at 8:16 of the second quarter. Domagala missed his second field goal attempt of the game, with his 32-yard attempt sailing right, adding a point on to Hamilton’s lead at 12:48 of the first half.

Hamilton’s defence came through shortly after, when Jumal Rolle intercepted Harker. Masoli and the offence got back on the field, with Domagala lining up a 15-yard field goal that went through with a second left in the half to give the Ticats a 14-0 lead.

The Ticats went with Evans at QB to start the second half and it paid immediate dividends. Evans found Brandon Banks from six yards out for a touchdown at 4:12 of the third, getting the 2019 MOP his second touchdown of the season. Domagala’s convert made it a 21-0 lead.

The Ticats continued to roll, with defensive back Tunde Adeleke picking off Harker just past the five-minute mark of the third, getting Hamilton the ball at Saskatchewan’s 27-yard line. That led to another Domagala field goal, this one from 35 yards out to push the score to 24-0.

After the Harker interception, Fine checked in for the Riders and turned it over on downs on his first drive. The Riders showed some signs of life when Elie Bouka intercepted Evans, who got Fine and the Riders the ball at Saskatchewan’s 46-yard line. Brett Lauther finished that drive off, sending a field goal home from 16-yards out at 13:20 of the third quarter.

Evans was looking for his second touchdown of the day, but Bouka had other plans for the end zone-bound pass, as he dove to the turf and hauled in his second pick of the game. Hamilton’s defence kept the Riders in check all day, though,

While the regular-season has wrapped up for both of these teams, they have their sights set on bigger things next week. The Riders head back to Saskatchewan to host the Western Semi-Final against Calgary, while the Ticats will stay put in Hamilton, where they’ll host the Eastern Semi-Final at Tim Horton’s Field against Montreal.