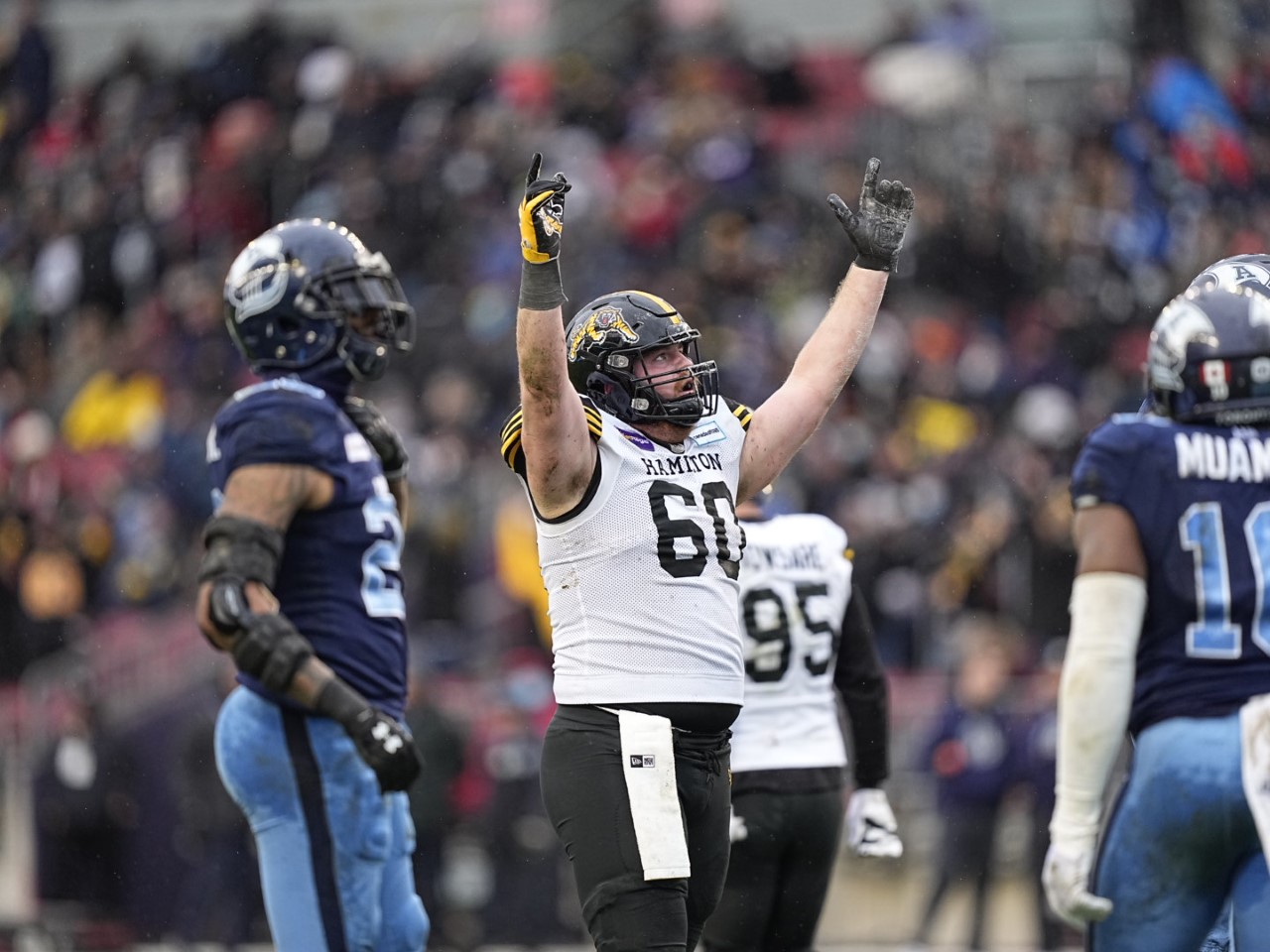 TORONTO — The Hamilton Tiger-Cats are headed home with one more game to play.

Dane Evans came in off the bench for Jeremiah Masoli in the second quarter and led the Ticats to a 27-19 win over the Toronto Argonauts in the Eastern Final, after trailing 12-0 at halftime.

McLeod Bethel-Thompson made 24 of 38 passes for 283 yards for the Argos, who fell to the Ticats for just the second time in five total meetings this season.

Evans was 16-16 for 249 yards and a touchdown. Hamilton was sparked by Papi White‘s third-quarter return touchdown and didn’t look back, punching their second straight ticket to the Grey Cup game.

The Tiger-Cats will make the trip back to Tim Hortons Field to host the 108th Grey Cup on Dec. 12.

The Argos’ defence looked to set a tone early, intercepting a Masoli pass on the opening drive of the game. Unfortunately for the Argos, the play came back on an offside call. While the stat wasn’t registered, the message was sent. This would be a defensive battle and one that the Ticats’ defensive group was happy to take part in.

Hamilton managed to stop a promising Argos’ drive at their three-yard line, which led to a 10-yard Boris Bede field goal that opened the scoring at 6:31 of the first quarter.

The first half largely consisted of  Bethel-Thompson and the Argos’ offence testing Hamilton’s defence. Toronto got to Hamilton’s three-yard line again and was stopped, after Bethel Thompson had a touchdown-bound pass broken up by defensive lineman Ja’Gared Davis. That set up an 11-yard Bede field goal at 12:55 of the first quarter that pushed the score to 6-0.

Toronto’s defensive pressure forced Masoli into a fumble early in the second quarter, which opened the door for Evans. Masoli went to the sideline with four of six passes made for 22 yards, with the fumble.

With a different face at QB, the game didn’t change the way the Ticats had hoped it would. Bede connected from 47 yards out at 8:44 of the second quarter to make it a 9-0 game. Meanwhile, after Tunde Adeleke wiped out another would-be TD in the end zone, Bede made his way back out onto the field and hit from 33 yards to push the score to 12-0 at 13:25 of the quarter.

The Argos thought they had a breakthrough play to close out the half. Dexter McCoil‘s forced fumble was recovered by Henoc Muamba and lateralled to Shaq Richards, who looked to be headed to the end zone. Evans made an incredible play as the last defender to rip the ball out of Richards’ hands, squashing what would have been a big momentum play for the home team.

The Ticats got some life at 5:19 of the third quarter from their special teams unit. Papi White took a Bede punt 92 yards to the end zone, with the snow seemingly thickening up as he made the return, providing the first touchdown of the day for either team. Michael Domagala‘s convert missed, leaving the Argos’ lead cut in half at 12-6.

The Ticats got back there quickly after.

Evans found Brandon Banks for a big 47-yard gain to get into Toronto territory, then kept the drive alive when he dove for short yardage on a fake field goal play. He then found receiver Jaelon Acklin for a 30-yard touchdown pass at 9:18 of the third to tie the game. It stayed knotted, as the Ticats weren’t able to score on a two-point convert attempt.

After Adeleke had another big breakup in the end zone, Bede hit his first bit of adversity on the day, missing a 41-yard field goal. The single point put Toronto up 13-12 at 11:54, a slim lead that they’d take to the fourth quarter.

Evans ensured that it was a short-lived lead. He led the Ticats on a 66-yard, seven-play drive that he capped off with a two-yard plunge at 3:35 of the quarter. Hamilton found its mark on the two-point convert this time, with Evans handing off to Don Jackson for the two-point score that put the Ticats in front 20-13.

Desperate for points, the Argos called on Bede for a 47-yard field goal, that went through at 8:45 to cut Hamilton’s lead down to four.

The Ticats continued to assert their dominance. Evans found Acklin for a 32-yard gain that got them to Toronto’s 16-yard line A quick pass to Tim White got them the Argos’ one-yard line and Evans broke through on short yardage at 12:12 to put his team up 10, Domagala’s convert made it a 27-16 game.

Bethel-Thompson looked to the end zone twice from 10 yards out and was almost intercepted by Adeleke, then overthrew his target on second-down. Bede’s 18-yard field goal cut the deficit to eight points at 13:50, but it was as close as the Argos would get.