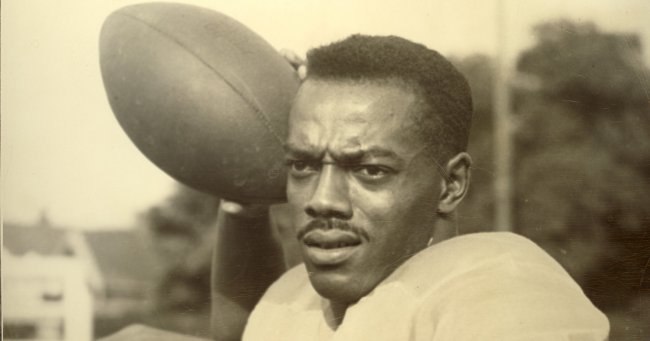 In a day and age where the rights and freedoms of people in this country are something most take for granted, it’s difficult to imagine a time where a man could be told he couldn’t play a certain position because of the colour of his skin.

However unimaginable to us, that was the reality that Bernie Custis faced when he first arrived with the Cleveland Browns, after being drafted 135th overall in the 11th round, in 1951.

A star quarterback for the Syracuse Orangemen in the late 40’s, Custis was never given a chance to play the position he grew up playing when he reached the professional ranks.

“Imagine being told, as a world-class athlete that you can’t play that position in your own country, you’ll have to go somewhere else to do it,” said William Armstrong, the producer and driving force behind a documentary that is slated for release in the new year, chronicling Custis’ journey through the pros.

“Not only was he able to persevere, and in fact flourish, but he did so without a chip on his shoulder.”

“He was able to take all that negativity and turn it into something positive, which is really the inspirational part of this story, it’s what makes him a hero,” said Armstrong.

Growing up as a high school track star in Philadelphia, Custis was blessed with a unique combination of physical ability and intelligence, making him a perfect candidate to lead an offence on the field.  He started for three years at Syracuse, setting school records that stood untouched for two decades.

After turning pro, even the considerably progressive management staff in Cleveland found the idea of an African-American quarterback to be so outlandish that they told him he would be converted to a running back.  With few options and a determination to play the position he loved, Custis left the NFL and headed north to Canada, where he eventually signed with the Hamilton Tiger-Cats.

“From day one the head coach at the time, Carl Voyles, could see that Bernie was head and shoulders above the other players at the quarterback position,” said Armstrong

He started every game for Hamilton that season and was named an All-Star for his efforts, leading the team to a 7-5 record before falling to Ottawa in the Eastern Final.

Custis would go on to play for both the Tiger-Cats and the Ottawa Rough Riders, winning a Grey Cup with Hamilton in 1951.  After his career ended in 1959, Bernie decided to stay in Canada, settling in the Burlington area and earning a degree in teaching.  Custis enjoyed a long career as a teacher and principal, before becoming the head coach at McMaster University in 1981.  During his tenure at Mac, Custis was named OUAA Coach of the Year in 1982 and 1984 and compiled a record of 32-23-1.  After leaving the Marauders following the 1988 season, Custis entered the pro ranks once again, spending time with both the Tiger-Cats and the Toronto Argonauts.

Beyond his obvious physical ability, it was his generous nature and warm personality that endeared Bernie Custis to the people he met.

“We hired Bernie to be a scout with us with the Argos and I got to know him as a person, and he was just an outstanding human being,” said Ticats General Manager Bob O’Billovich.

“I know that he had a terrific career before I met him, as a player he was well before my time in Ottawa but I always heard about how good he was on the field,” he added.

Bernie Custis is now 86 years-old and in 1998 was inducted in the Canadian Football Hall of Fame.  Despite the numbers he put up as both a player and coach, his contribution to the game of football goes beyond stats and awards.  As the first African-American quarterback in pro football history, Custis has allowed generations of young men to realize their dream and never be told they couldn’t play any position they chose, for any reason other than their ability.

On Saturday night at halftime, the Hamilton Tiger-Cats will perform a tribute to Custis, honouring his career and giving him the recognition he deserves.