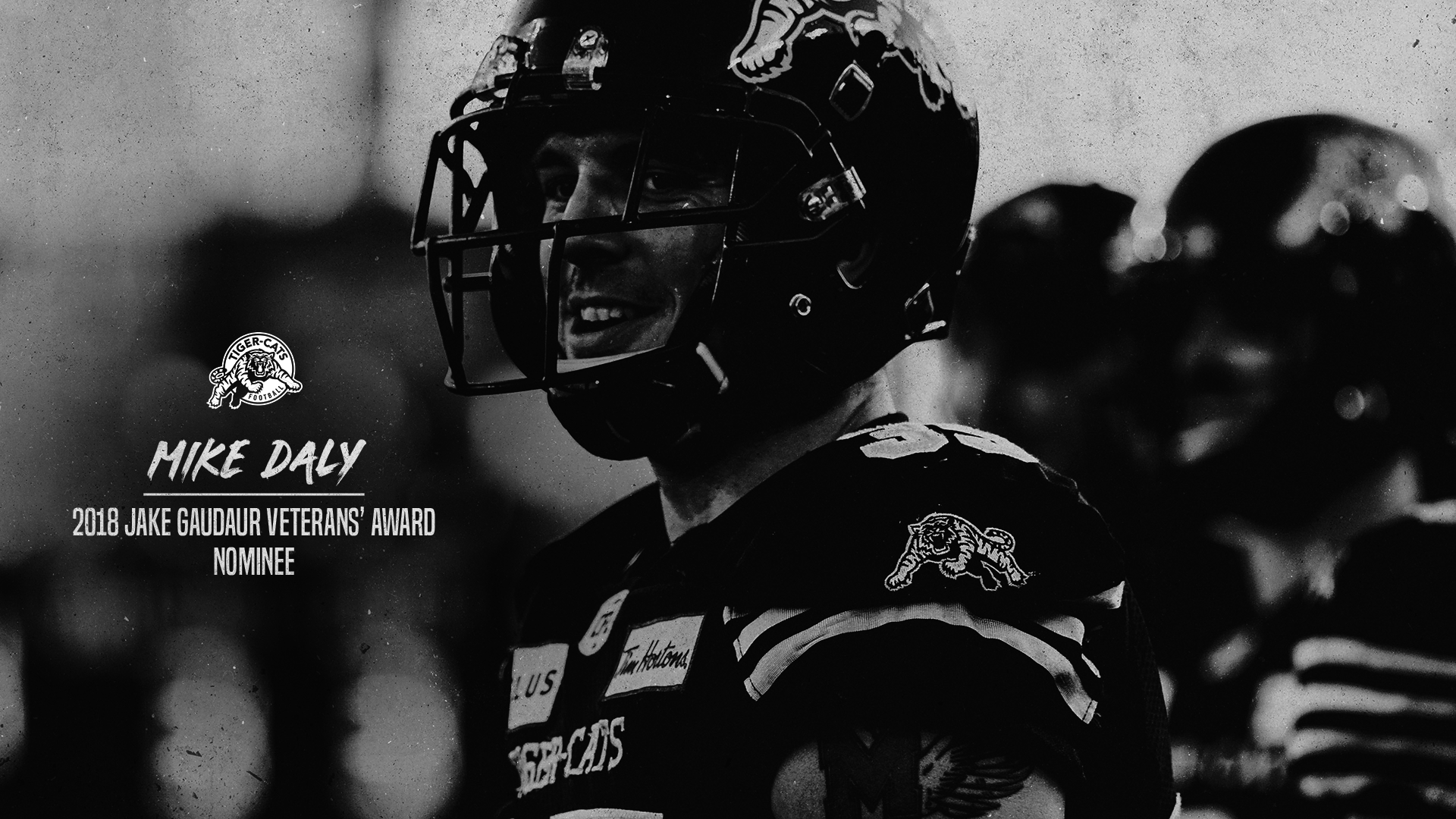 TORONTO (November 6, 2018) – Ahead of the 106th Grey Cup Playoffs, the Canadian Football League (CFL) has unveiled the nine players nominated for the distinguished Jake Gaudaur Veterans’ Award. The honour has been awarded every year since 2010 to a Canadian CFL player who best demonstrates the attributes of Canada’s veterans: strength, perseverance, courage, comradeship and contribution to Canadian communities. The award recognizes Jake Gaudaur for embodying these attributes both as the CFL’s longest-standing Commissioner and as a distinguished veteran of the Second World War.

The nominees are chosen by their respective clubs; the recipient is chosen by a committee and honoured during the Shaw CFL Awards at Grey Cup Weekend. This year’s awards gathering will take place at the Winspear Centre and will be hosted by TSN’s James Duthie and Natasha Staniszewski on November 22nd in Edmonton.

Here is the list of the nine nominees for the 2018 CFL season:

Rolly Lumbala is a hard-working, physical player who puts his body on the line and mentors younger teammates. 2018 was a difficult year for Rolly: his father Eugene moved in with him in Vancouver to battle cancer, where Rolly served as his primary caregiver. Eugene passed away on September 5th, and Rolly demonstrated amazing perseverance in showing up to play. The Lions are 6-3 since September 5th, and Rolly’s teammates would love nothing more than to win a Grey Cup ring for Eugene. Rolly spends most days working at Husky House, a local foster home for at-risk youth. He’s also a key figure in the Lions’ Be More Than A Bystander anti-violence against women initiative and the Lions’ Read, Write & Roar program.

Ryan returned from a potentially career-ending injury in 2017 to remain “Mr. Consistency”, as he is known to his teammates for his dedication and internal drive. Ryan goes out of his way to create a supportive and welcoming environment on the team and among gameday staff; he often makes arrangements for players to get together outside of practice. He’s an ambassador for Edmonton’s anti-bullying program, is involved with youth and flag football initiatives, and launched King’s Kids to introduce kids in vulnerable situations to football. He runs the King McCarty Camp (alongside his brother Neil King and teammate Calvin McCarty), a sports camp inspiring kids to keep active.

Junior offered a lot of support to teammates like Kamar Jorden, who suffered a traumatic knee injury, helping them feel like a part of the team and offering friends strength when they most needed it. As the longest-tenured Stampeder at his position, Junior helps younger defensive tackles with their role. Junior has suffered several injuries himself, battling back each time and showing tremendous strength and perseverance in remaining a regular contributor on the league’s top defence. He is the Stamps’ representative for PinkPower, raising money to support the Canadian Cancer Society and raise awareness about women’s’ cancers – his mother, Gloria, is a breast cancer survivor.

Makana has demonstrated exemplary hard work and perseverance to excel at football despite a relative lack of experience. He joined the Roughriders at 29 with no collegiate experience – spotted playing flag football by members of a semi-pro team, he played just a few games before getting a call from the Riders. Makana has had a challenging past, and is eager to help Regina’s inner-city youths avoid the pitfalls that led to his own struggles. He is a fixture at Regina’s Scott Collegiate, assisting inner-city kids with sports programs, dinners, and scholarship applications. He organized a campaign among Riders players to buy backpacks and school supplies for Scott’s Grade 9 students.

Never drafted, Andrew turned down a university scholarship to play junior football so he could work full-time and raise his daughter. He’s worked hard to achieve his dreams, working through injury and rising up through the junior ranks. He’s generous to his teammates, bringing them cold medicine when they’re sick and hosting them for meals. In addition to his community appearances for the team, Andrew has his own program called “Harris’ Heroes”, hosting youth groups at every home game and meeting with youth making a difference in Winnipeg. A big fixture in his hometown of Winnipeg, when the Grant Park football lost their equipment in a fire Andrew brought some teammates and some Bombers’ equipment to help run their practice and returned to watch them play.

Following his successful recovery from shoulder injuries in 2017 and early 2018, Mike resumed playing during training camp, overcoming the 50-50 odds he was given by doctors of ever returning to football. Not only did he return, he won the starting job at safety out of training camp and went on to smash his career high in defensive tackles. Throughout his rehabilitation, Mike remained a strong team contributor, assisting coaching staff with film and taking a leading role in the club’s community initiatives. This season, he has continued to lead his teammates off the field, including involvement in an anti-cyberbullying campaign, flag football and the team’s long-running BeFit health and fitness program. In addition to his leadership and hard work on the field, Mike has been involved with programs at McMaster Children’s Hospital and Camp Kidaca, among others, all while fulfilling his roles as a defensive assistant for McMaster’s football program and as a bantam hockey coach in the Chedoke Minor Hockey system.

Declan has played in all four special teams over his Argos career and has become an integral part of the team. He hasn’t missed a game yet, and his hard work and persistence through injury is noticed by his teammates and coaches. He’s become a mentor for rookies on the team, helping them acclimate to pro football. Declan visits a lot of schools for the Argos’ “Huddle Up” anti-bullying program, speaking to students about facing adversity.

Known as a strong presence who has played through stomach flus and injuries, Jean-Philippe is an enthusiastic teammate and one of the team’s loudest cheerleaders. He’s persistent, having played nearly three full seasons with the REDBLACKS as a key special teams contributor before getting the opportunity to start at safety this season. He is regularly involved with community events: this year he took over former REDBLACK Moton Hopkins’ camp for children with autism in Ottawa. The program didn’t miss a beat as he brought in several teammates to participate and demonstrated his passion for coaching youth football.

Martin has suffered tremendous loss: his mother to cancer before his first college year, and his father in early 2012. His brother also received a cancer diagnosis, and Martin himself experienced season-ending injuries in 2013 and 2016, fighting back to regain his spot on the team both times. His teammates consider his dedication, hard work, and enthusiasm an example to follow. Having pushed himself to finish his own schooling while mourning, he’s an ambassador for the Alouettes’ Together At School program, encouraging Quebec youth to stay in school; he’s also a regular at the Manoir Marc Perron, where he helps the elderly and handicapped residents.

This year’s Jake Gaudaur Veterans’ Award will be honoured during the Shaw CFL Awards on Thursday November 22nd during Grey Cup week in Edmonton.