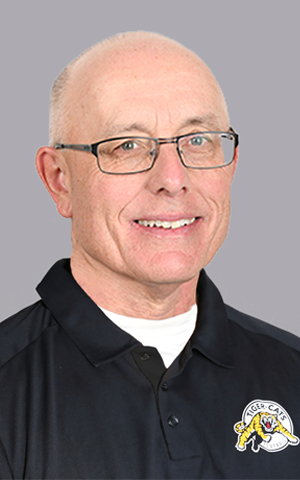 Gibson has 40 years of coaching experience, including 15 seasons at the Canadian Football League level and over two decades at the NCAA Div. I level. His tenure as a CFL coach includes a previous two-year stint with the Tiger-Cats where he served as Hamilton’s Assistant Head Coach and Offensive Coordinator from 2009 to 2010.

In 2015, Gibson served as Head Coach of the University of Regina Rams before returning to the CFL ranks with the Eskimos.

Gibson’s most recent NCAA stop was at the University of Louisiana-Lafayette where he served as Offensive Line Coach for three years (2002-04). Prior to his CFL tenure, Gibson spent four seasons (1996-1999) as the Offensive Tackles/Tight Ends and Special Teams coach at Rutgers University.

After completing his playing career as a three-year starter at centre for Western Maryland College in 1978, Gibson began his coaching career at his alma mater as a graduate assistant. In 1979, Gibson moved to Cornell University as their offensive line coach and recruiting coordinator. In 1982, Gibson joined Boston University as their offensive coordinator and quarterback coach – a position he held for six years (1982-88). Following one season as Assistant Athletic Director and Recruiting Coordinator at Rice University, he spent four seasons as Temple University’s Offensive Line Coach (1989-93). He then joined Colgate University, where he served as Offensive Coordinator and Quarterbacks Coach for two years (1994-96).