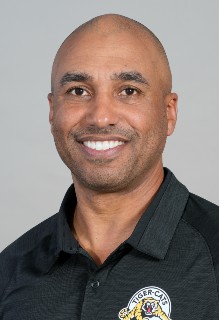 Orlondo Steinauer had his role expanded to President of Football Operations & Head Coach on December 24, 2021 after being named the 26th Head Coach in Hamilton Tiger-Cats history December 3, 2018.

Steinauer holds a 23-9 all time record as a head coach and has led the Tiger-Cats to back-to-back Grey Cup appearances. In his first season as a head coach in 2019, Steinauer won the Annis Stukis award as the CFL’s Coach of the Year after tying a league record for a first-year head coach with 15 wins (Dave Dickenson, CGY – 2016) and leading the Tiger-Cats to a franchise-best 15-3 record. The 15 wins were three more than the club’s previous franchise high of 12 (1989 & 1998), seven more than the 2018 Tiger-Cats (8-10), and also tied an all-time CFL record for wins by an East Division team in a single season. The Tiger-Cats also went 9-0 at home for the first time in franchise history, finished first overall in the CFL standings for the first time since 1998, and captured the East Division crown for the first time since 2014. Steinauer’s team also topped the league in points for (551) while allowing the least points against (344) in 2019. The 344 points allowed were the fewest in franchise history for an 18-game season, while the 551 points scored were second to only the 1999 team that tallied 603.

At Fresno State, Steinauer was nominated for the 2017 Broyles Award, which honours college football’s top assistant coaches, after helping lead Fresno State’s remarkable turnaround that included a 10-4 record and Hawaii Bowl win over the University of Houston. The Bulldogs were just one year removed from a 1-11 record and became the second team in NCAA Division I Football Bowl Subdivision (FBS) history to go from double-digit losses one season to double-digit wins the next. Steinauer’s defensive unit was a large part of that turnaround, posting dramatic statistical and national ranking improvements from the previous season. In 2017, Fresno State ranked first in the Mountain West Conference in scoring defence (17.9 ppg), and second in both rushing (113.4 ypg) and total defence (320.6 ypg). The Bulldogs won the turnover battle seven times on the season, winning six of those games. From 2016 to 2017, Fresno State went from 68th in the FBS in total defence (415.1 ypg) to 15th, from 83rd in scoring defense (30.9 ppg) to 10th, and from 123rd in rushing yards against per game (247.4 ypg) to 11th. Additionally, Fresno State ranked first in the MWC and 33rd in the FBS in opposing third-down conversions (34.8%), ranked first in the MWC in sacks (34) and ranked fifth in the FBS in opposing fourth-down conversions (29.2%).

In 2016, the Tiger-Cats owned the second-most interceptions (17) in the league and tied for the second-most fumble recoveries (19). They tied for third in takeaways (44) and generated the second-most points off turnovers (131). Hamilton also accounted for 50 quarterback sacks, two short of the league-high. Individually, Hamilton accounted for four of the 12 East Division all-star positions on the defensive side of the ball in defensive end John Chick, defensive tackle Ted Laurent, linebacker Simoni Lawrence and defensive back Emanuel Davis. Chick recorded 14 sacks and four forced fumbles while Laurent posted eight sacks – the d-line duo accounted for 22 of the team’s 50 sacks. Lawrence had the league’s fourth-most tackles (89) and Davis had the league’s third-most interceptions (5).

The Tiger-Cats scored eight touchdowns on defence in 2015, including six interception returns and two fumble returns for majors. The eight defensive touchdowns was the second highest total in franchise history (10 – 1971), exactly double the amount produced by the next closest CFL team that season, and nearly one quarter of the defensive touchdowns generated by the entire league. The unit’s six interception return touchdowns was just one shy of the CFL record set by the Toronto Argonauts in 2006, a team that Steinauer played on. Hamilton’s defence also accounted for the league’s most takeaways (52), points off turnovers (184), most interceptions (tie-26) and most turnovers on downs (15) in 2015, and generated the East Division’s Most Outstanding Defensive Player in linebacker Simoni Lawrence.

In 2014, Steinauer’s defence ranked at or near the top of the league in numerous defensive categories, including fewest rushing yards per game (76.8, 1st), average yards allowed per rush (4.6, 1st) and fewest yards of net offence (5656, 2nd).

Steinauer previously served as Defensive Backs Coach for the Toronto Argonauts from 2010-12, and filled in as defensive coordinator on an interim basis for the final 12 weeks of the 2011 season. In 2012, Steinauer helped direct a stingy Argos defence that allowed opponents to complete just 58.8% of their passes – best in the CFL – while surrendering just 269 passing yards per game. The Argos also registered the second-most interceptions (24) and allowed the second-fewest touchdowns (27).

In three seasons under Steinauer, the Argos placed five defensive backs on the East Division All-Star team and two on the CFL All-Star team, including first-year cornerback Pat Watkins in 2012.

As a player, Steinauer captured two Grey Cup rings in 13 seasons as a dominant defensive back. After beginning his career with the Ottawa Rough Riders in 1996, he would spend four years with the Tiger-Cats and eight seasons with the Argonauts. Renowned for his intelligence on the field, Steinauer was named an all-star at three different positions (cornerback, halfback and safety), earning seven East All-Star nods and five CFL All-Star honours in total. His 1,178 interception return yards are the second most in CFL history.

Steinauer began his coaching career in earnest in 1996 when he worked as the defensive backs coach at Western Washington, his alma mater, during the off-season – a role he would continue until 1998.

In 2009, Steinauer joined Sportsnet as their CFL Insider and established ‘The Ozone,’ a foundation focused on improving the quality of life for those less fortunate.