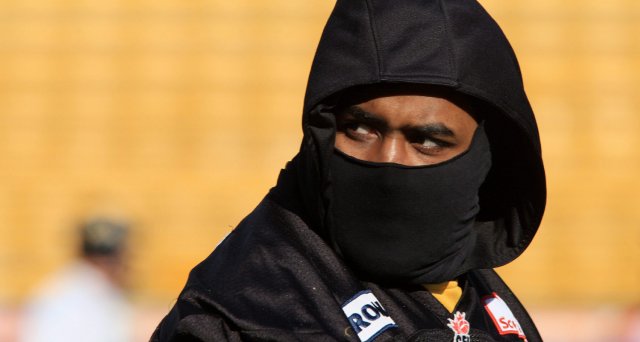 WINNIPEG — Players and coaches from both teams agree controlling turnovers, and not the weather, will be key when the Winnipeg Blue Bombers and Hamilton Tiger-Cats meet Sunday in the CFL East Division final.

Getting off to a fast start in the last CFL game ever played before a sellout crowd of more than 30,000 fans at Canad Inns Stadium would help, too.

Sluggish first quarters have plagued the Bombers this season, although they did manage to beat the Ticats in all three of their regular season meetings on the way to top spot in the East.

It was a Cinderella turnaround for a team that finished 4-14 last year and missed the playoffs and it helps that Winnipeg starting quarterback Buck Pierce insists he’s 100 per cent coming off a knee injury.

“It feels great because you really never know how many opportunities you’re going to get,” Pierce said Saturday as the Bombers prepared to play for a shot at the Grey Cup, a trophy they haven’t won in 21 years.

It’s set to be a frosty final, with temperatures expected around -12 C at game time. Crews were busy clearing snow from the field and the stands Saturday.

But that’s not unexpected in Western Canada in November.

“I was expecting worse, playing in Winnipeg and knowing at this time of the year it can get bad,” said Hamilton quarterback Kevin Glenn, who used to play for the Bombers. “Going out there today it’s fine and this is what it’s expected to be Sunday.

Winnipeg head coach Paul LaPolice said there are other factors to deal with.

“The wind is the bigger concern for me this late in the year,” he said. “It’s sometimes hard to throw the ball with the wind because the ball will hang up in the air.”

LaPolice said Winnipeg, which will play home games at a new stadium at the University of Manitoba next season, had success at times in 2011 throwing in gusty conditions.

Ticats head coach Marcel Bellefeuille, meanwhile, isn’t worried the cold will give the Bombers much of an advantage after taking a straw poll in the locker-room.

“Seventy per cent of our team have either played out in the Prairies and in playoff games and/or were raised or born here, so I think that shouldn’t be an issue,” he said.

Also not an issue as far as Bellefeuille is concerned is Hamilton’s decision to sign former Winnipeg receiver Terence Jeffers-Harris just before the weekend game, a day after he was released by the Bombers for not making meetings and other issues.

This will likely be Bomber nose tackle Doug Brown’s last game home game. The CFL all-star has said he plans to retire, although he was just a little cagey Saturday when asked about speculation he might change his mind.

“This game isn’t about how many snaps I have left or not, this is the final chapter of the 2011 Winnipeg Blue Bombers and what we’re going to make of this season,” said Brown, who was upset with how the team played in the regular season finale against Toronto at Canad Inns. “We had one opportunity to close it out in the regular season and we obviously didn’t live to our end of the bargain in closing this place down with the respect it deserves.”