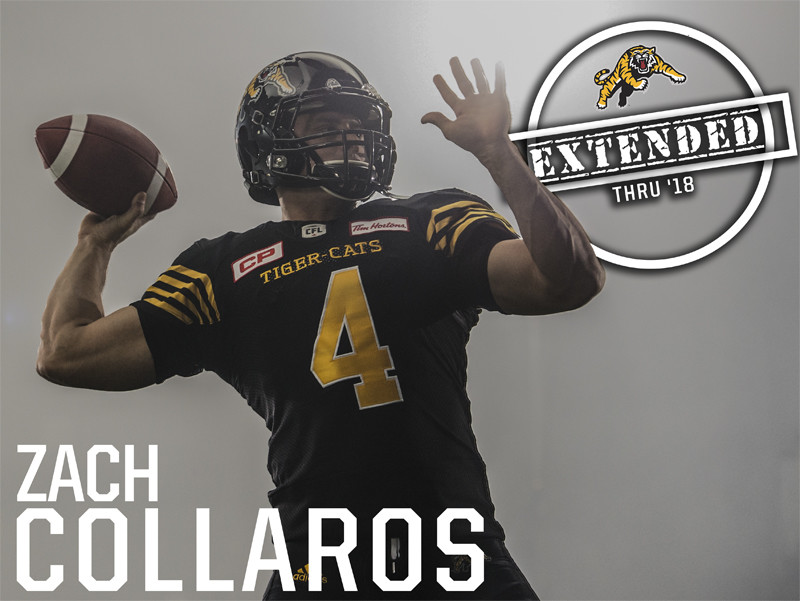 The Hamilton Tiger-Cats announced Monday that the football club has signed international quarterback Zach Collaros to a contract extension through the 2018 CFL season.

Collaros, 27, started 12 regular season games in 2015, completing 252 of 359 passing attempts (70.2%) and posting career highs in passing yards (3,376) yards and touchdowns (25), while rushing 28 times for 164 yards and one touchdown. He set the Tiger-Cats franchise record for completion percentage in a single season, while earning Shaw CFL Top Performer of the Month honours (August – 1st place), and was a Shaw CFL Top Performer of the Week three times (Week 8 – 2nd place, Week 9 – 2nd place, Week 11 – 1st place). The 6-0, 222-pound native of Steubenville, Ohio, suffered a torn ACL in his right knee on September 19 vs. Edmonton and missed the remainder of the 2015 season.

At the time of the injury, Collaros was leading the CFL in passing yards, touchdown passes and quarterback rating (113.7), and was second in completion percentage. Despite missing six games due to injury, he was the Tiger-Cats nominee for the CFL’s Most Outstanding Player award for the second consecutive season.

The Tiger-Cats signed Collaros as a free agent on January 30, 2014, after he spent two seasons with the Toronto Argonauts. In his first season in Hamilton, Collaros led the Tiger-Cats to an Eastern Division title and a Grey Cup appearance. The University of Cincinnati product has played in 35-career CFL games over four years (2012-15), accumulating 728 completions on 1,081 attempts for 9,054 yards and 55 touchdowns. He has also posted 147 rushes for 755 yards and eight touchdowns.