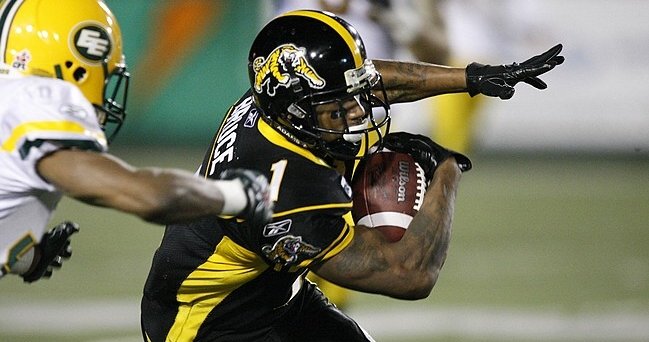 This week two contest will be the first of two regular season meetings between the Tiger-Cats and Eskimos in 2011. Last year, the Ticats and Esk’s split their season series, with each team winning their respective home games. Saturday’s match-up will be the 80th meeting between the two teams since 1950 and Edmonton holds the edge in the all-time series, 50-28-1. The Ticats have lost their last four games played at Commonwealth Stadium and their last six meetings in Edmonton have been decided by six points or less.

The Tiger-Cats come into Saturday’s contest with an 0-1 record after suffering a 24-16 loss to Winnipeg in their home opener on July 1. The Cats will need to limit their turnovers this week against the Eskimos, after quarterbacks Kevin Glenn and Quinton Porter were intercepted a combined four times on Canada Day. Although Hamilton didn’t secure a victory against the Blue Bombers, the Tiger-Cats coaching staff have to be pleased with the performance of its defence, which allowed a league-low 230 yards last week. Saturday, the Ticats are looking to chalk up their first ‘W’ of the season, while spoiling the Eskimos home opener in the process.

The Eskimos, who went 7-11 in 2010, started their season on the road in Saskatchewan last week with a resounding 42-28 victory against the reigning Western Division Champions. The Esk’s harassed Roughriders quarterback Darrien Durant, sacking him twice and intercepting three of his passes, making it difficult for the Saskatchewan play caller to get comfortable in the pocket. This re-energized Edmonton squad will attempt to build on their momentum from week one and earn a win in front of their hometown crowd.

This will be the first meeting between the Tiger-Cats head coach Marcel Bellefeuille and Eskimos rookie head coach Kavis Reed. Bellefeuille has a career record of 19-26 as a CFL head coach in the regular season and holds a 2-2 record against the Eskimos. Black and Gold faithful will remember Reed, who was Hamilton’s defensive coordinator from 2004-06. Last year, Reed was Winnipeg’s defensive coordinator, leading a unit that finished first in the league for allowing fewest net passing yards (4,580).

Maurice Mann #86 / WR / Hamilton
Mann will be going against his former team at Commonwealth Stadium, where he played from 2007-09 before being traded to Hamilton last year. In 2010, Mann caught a respectable eight balls for 113 yards in two games against the Eskes, a number you can bet he’ll strive to top this season. After a stellar showing at home against the Bombers in week one, where he posted a career high nine receptions, Mann is quickly looking like Glenn’s go-to option in this early season. The Eskimos defensive backs will have to account for Mann in the red zone, where he scored a touchdown last game, while at the same time respecting his downfield ability.

Jamall Johnson #28 / LB / Hamilton
If Black and Gold fans didn’t know the name Jamall Johnson before the season started, they definitely do now, after his potential hit-of-the-year sack on Bombers quarterback Buck Pierce in week one. Coming off a 2010 season where he led Hamilton’s defense in tackles, Johnson picked up where he left off, flying to the ball all evening, finishing with seven tackles and two sacks, proving to be a thorn in the side of Winnipeg’s offence. As the Tiger-Cats weak side linebacker, Johnson will be a valuable weapon in the Ticats pass rush arsenal, which will be aiming to disrupt Eskimos quarterback Ricky Ray tonight. With last week’s devastating sack fresh in everyone’s memories, you can bet that Ray will want to know where J.J. is lined up before every snap.

Arland Bruce III #1 / WR / Hamilton
Bruce III had a self proclaimed ‘off game’ last week, only catching two balls for 22 yards against Winnipeg. If last season is any sort of indication, that means Bruce III will have a bounce back game on Saturday. In each game immediately following his two worst performances last season (3-44 vs. WPG and 2-22 vs. MTL), Bruce III rebounded for 7-104 vs. CGY and 16-272, 2 TD vs. SSK. Bruce III has been working hard in practice this week in preparation, taking extra reps and catching balls on the sidelines and this, combined with his ability to perform after a poor outing, might make Bruce III a dangerous man against the Eskimos this evening.

Ricky Ray #15 / QB / Edmonton
Ray, a nine year CFL veteran, looked as good as ever in the Eskimos week one victory against the Roughriders, completing 21 of his 27 passes for 294 yards and three touchdowns. With that performance, Ray also moved into tenth place on the CFL’s all-time passing yards list with 36,231 yards, passing Kent Austin. Needless to say, Ray is coming into this game with a winning attitude. In two games against the Cats in 2010, Ray threw for a combined 580 yards with two touchdowns and an interception, playing much better in the game at Commonwealth Stadium compared to the game at Ivor Wynne. Regardless, Ray will look to expose the Tiger-Cats secondary with the deep ball and move the chains with his arm.

Adarius Bowman #4 / WR / Edmonton
Bowman was on the positive end of seven Ricky Ray passes last week including a four-yard touchdown strike, finishing the game with 103 receiving yards. The 6.03, 233 lbs Bowman used his speed and size to separate himself from Roughriders defenders, capitalizing on Saskatchewan’s zone coverage all night. In 2010, as a member of the Bombers, Bowman owned the Ticats, posting 267 yards on 14 receptions with two touchdowns over three games. Bowman also had his career-best game against the Cats in 2009, shredding Hamilton’s secondary for 213 yards on 10 balls with 2 touchdowns on October 12, 2009. Bowman will definitely be on Hamilton’s radar as the defensive backs will look to prevent Bowman from beating them deep, as he caught balls for 54 and 51 yards in back-to-back games last season against the Ticats.

Fred Stamps #2 / WR / Edmonton
Stamps was relatively quiet (3 receptions for 34 yards) in the Eskimos week one matchup against Saskatchewan, attracting a lot of attention from the Roughriders secondary who made sure to keep him out of the end zone. Even though Stamps didn’t post gaudy numbers, his presence on the weak side of the field opened up room for strong side slotbacks Bowman and Barnes, who both had big games. Unfortunately for the Tiger-Cats, Stamps enjoys playing Hamilton, historically producing all-star-like numbers against the Black and Gold. In his past four games against the Ticats, Stamps caught a combined 28 balls for 470 yards and one touchdown. Slowing down ‘Fast Freddie’ will be a Ticats priority.

Tiger-Cats Defensive Line vs. Eskimos Offensive Line
One of the keys to Ricky Ray’s success against the Roughriders last week was the protection he received from his offensive line. Only giving up one sack on the evening, the Eskimos front five provided Edmonton’s pass catchers with time to develop their routes, which in turn allowed Ray to find his open targets downfield. The result was a number of big gains for Edmonton’s offence. The performance of the offensive line was encouraging for Eskimo fans, as Coach Reed was forced to start a rookie left tackle and shuffle other personnel around on the line due to injuries, a scenario that usually doesn’t bode well for any position group.  On the other side of the coin, Hamilton’s front seven had a stand out game on Canada Day against the Bombers, sacking quarterback Buck Pierce five times. Employing a variety of blitz packages, the line benefited from a strong showing by rookie tackle Eddie Steele and second year tackle Albert Smith, who both got to Pierce last week. Something’s got to give in a game that will be won or lost in the trenches of Commonwealth Stadium.