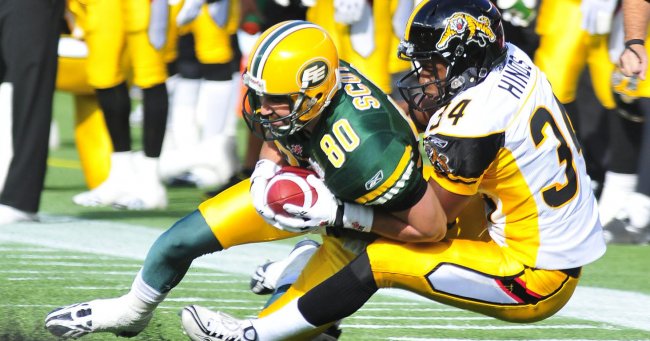 Rookie pass catcher Chris Williams is slated to start at the boundary wide out or X position in the Ticats offence and he could be an X-factor in his CFL debut.

“I think he can bring a lot to the offence.  He’s probably one of the fastest guys on the field, if not the fastest between him and Thigpen,” veteran quarterback Kevin Glenn said. “He’ll do a good job of stretching the defence.  He’s another guy where if you get the ball to him, he can make somebody miss.”

Williams’ stature, especially for a receiver, may not catch your eye, but his athletic ability and straight line speed give him the attributes needed to make game changing plays – evidenced by his 91-yard punt return touchdown against Montreal in the Ticats pre-season finale.

“It will be his first live action and we have to see how it translates into a real game,” head coach Marcel Bellefeuille said. “He had a great pre-season not just as a returner , but as a receiver as well.”

The 5’9” New Mexico State alum has a reputation for producing anytime he suits up. Williams had over 3,500 yards and 32 majors receiving in his four-year career as an Aggie and he will look to continue his knack of production in Black and Gold on Saturday.

“I think I can bring some speed and playmaking ability,” he said. “We’ve got a lot of things in the gameplan this week that are going to be good plays for us and hopefully we take advantage of the things they don’t do well.”

Glenn and the veterans on the offensive side of the ball will be right there to help him along in his first CFL game, however, Williams wouldn’t mind getting a chance to touch ball in the kick return game, but he fully understands why it might not happen.

“We’ve got a beast back there, hopefully I do get a chance,” Williams said. “But if not, I’m definitely not complaining, Thig knows how to do it.”

Smith Wants To Relieve His Itch

A torn achilles ended Bo Smith’s season in 2010 and he has worked diligently to get himself back on the cusp of game action.

“I feel great.  My cardio is up.  I feel comfortable. I feel like I’m ready to go, I just have to wait on coach to give me the go ahead,” Smith said.

The four-year CFL veteran could be spotted each day during training camp in 2011 on the sidelines, behind the white lines, still vocally active and mentally into every Ticats practice.

Smith would get his own drills in alone on the field after practice was over, working one day at a time to get himself back into playing shape and fully healthy in order to step back between the white lines.

“He’s a veteran guy and he’s been working in practice this week,” Bellefeuille said.

“I’m really, really itching. I’ve been out for a whole year almost and it’s just something that was just really hard on me,” Smith said. “I worked so hard in the off-season to get out here to play again and I’m about to get that chance.”

In any pro sport there is pressure to win every game, Kevin Glenn knows very well how important it is to grab a victory at Commonwealth Stadium on Saturday to get his team back on the winning track.

“That’s what this game and this profession is about — winning games – and that’s what we need to do,” he said. “Every week is an urgent week. You don’t ever want to go out and say, ‘nah lets go ahead and lose this week and maybe will come back and win next week’, and then the third week lets say will just toss that one up in the air and flip a coin on it.”

On offence Marcel Bellefeuille and his coaching staff are hoping a more elementary attack will extinguish the mistakes from Canada Day’s loss and help kick start his veteran signal caller.

“The coaches made some adjustments and simplified some things to give ourselves a better opportunity to execute and not think so much on the field,” he said.

Black and Gold Wary Of Ray

Plain and simple, if the Tiger-Cats can slow down Ricky Ray it will go a long way towards nabbing a road win.

“He’s a quarterback that runs if he has to, that’s not his first option. With the game plan we have coming in this week we want to get the ball out of his hand pretty fast,” safety Jason Shivers said. “Just watching the game from last week, a lot of people see that we’re going to come, we’re going to bring it and I think that’s the one thing that is going to give Ricky Ray problems.”

Timing up the snap count is key for any defence, but it has even more importance when using pressure packages, as the Ticats like to employ. Head coach Marcel Bellefeuille could be heard different times throughout the week of preparation for Edmonton barking at his defensive line to be aware of Ray’s penchant for hard counts and drawing defences offside, in turn giving his offence a free play.

“We watched the film from last year and he got us a couple times,” defensive tackle Albert Smith said. “We just want to emphasize watching the ball, making sure we don’t give up the cheap five yards because you eliminate play calls and you hurt yourself by letting them get closer to the endzone.”

Smith, the 290-pounder who anchors the Ticats defence certainly knows how import the battle in the trenches will be in affecting the outcome of the contest.

“It’s about who wins the battle up front.”

“Edmonton has a great receiving core. They have Adarius Bowman and they’re using him as a blocking receiver as well as a down field threat, so that’s somebody that we definitely have to pay attention to. You also have Barnes who can stretch the field, he likes to run a lot of corner routes. Then you got Fred Stamps I said him last, but that guy can run a lot of routes well. Those main three guys we have to really pay attention to and make sure that we’re doing a good job of keeping the big plays to a minimum.”

“They will throw the ball down the field, Ricky likes to throw the corner routes, they also run lots of different shovel plays, so they pose some different threats. They did a good job running the ball in week one and they had great balance. They’re a great offence and they proved that by scoring 42 points in Regina.”