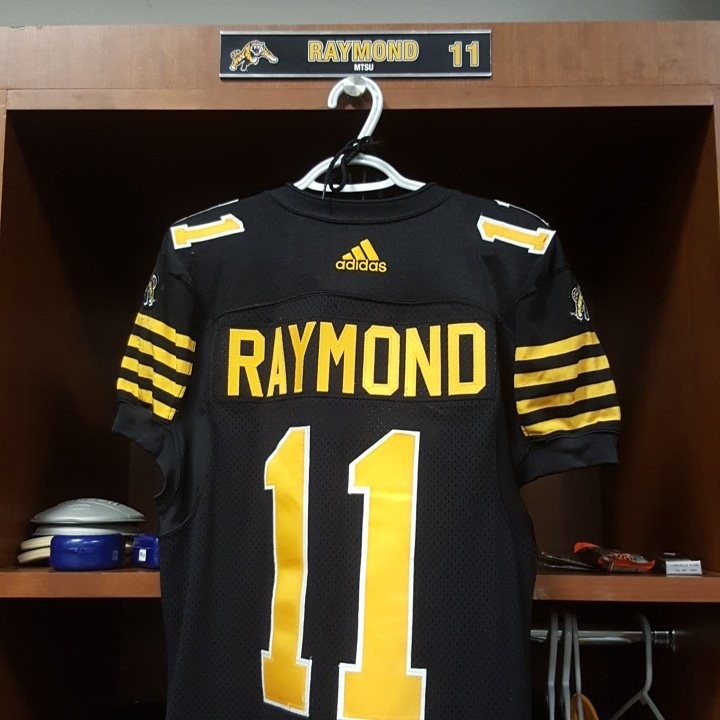 Ticats strong side linebacker Keon Raymond is referred to as the ‘OG’ around the Ticats locker room.

The nickname meaning ‘Original Gangster’ is reflective of the 33 year old’s veteran presence and an ode to his 9 seasons and counting in the CFL.

“It’s quite fitting knowing that I’ve been around for a while in this league and understanding my place and my opportunity that’s been given to me,” said Raymond. “I think it’s a term of endearment too. There’s a lot of respect that comes with it when those guys call me that, and I appreciate it.”

Raymond’s path to the Hamilton Tiger-Cats and the opportunity to compete for another Grey Cup was welcomed but not planned. After eight seasons, two Grey Cups, and two West Division All-Star nods playing with the Calgary Stampeders, Raymond signed with the Toronto Argonauts during the 2016 off-season. He was released eight games later after recording 34 tackles, the second most on the team, along with two interceptions, a touchdown and a sack.

Raymond signed with the Ticats at the beginning of October to round out the linebacker core of Simoni Lawrence and Larry Dean, but even after arriving in Hamilton it was not smooth sailing.

After tying for the team lead in tackles in his Week 17 Ticats debut against the Ottawa Redblacks, Raymond missed the next two games with an injury.

Raymond said that he used his time on the sidelines as a learning opportunity to observe how the Ticats worked as a cohesive unit.

The Black and Gold have started four different strong side linebackers this season due to injury but are getting healthy at the right time.

Defensive coordinator Orlondo Steinauer says that although it would have been ideal for Dean, Lawrence, and Raymond to play in more games together heading into the playoffs, the chemistry is evident.

“Larry Dean has to be the most underrated player in the league,” said Steinauer. “To lose a guy like Taylor Reed and feel like you’ve gotten better with Dean, it’s just a compliment. You combine that with Simoni Lawrence, an infectious personality and a guy that cares, and then you add a veteran and another champion like Keon Raymond, even though they haven’t been together a lot, it’s kind of a natural fit and it’s been fun to watch those guys grow because they just kind of know where each other are at.”

Steinauer’s sentiments were echoed by Dean, who says that Keon was an immediate fit to the team.

“Football is a universal language,” said Dean. “Either you speak it or you don’t, and Keon, the ‘OG,’ he speaks it very well,” said Dean. “He speaks it fluently. He stepped right in. He stepped up to the plate. He came in and saw an opportunity and has taken advantage of it.”

video videos
April 15: Shawn Burke and Louie B.
3 days ago

video videos
April 13: Mike Walker and Louie B.
5 days ago

video videos
April 13: Orlondo Steinauer and Louie B.
5 days ago