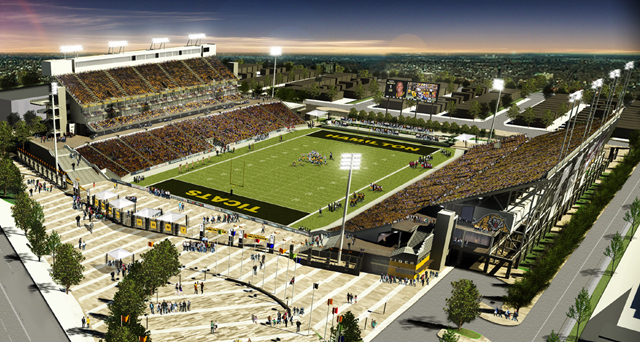 NEW STADIUM FOR HAMILTON WILL DELIVER A PHENOMENAL FAN EXPERIENCE

The Hamilton Pan Am Soccer Stadium unveiled today by the TORONTO 2015 Pan American/Parapan American Games (TO2015) and its partners will deliver a phenomenal experience for Tiger-Cats fans starting in 2014, says the Canadian Football League team’s Caretaker Bob Young.

“This is a great day for everyone who loves the Tiger-Cats, the great City of Hamilton and the wonderful communities that surround it – what we proudly call TigerTown,” Young said.  “The new stadium will deliver a fan experience that is truly second to none.”

Earlier this afternoon, TO2015 unveiled plans and artist renderings of the new facility that will become the new home of the Tiger-Cats starting in 2014 and the sole host venue for soccer during the TORONTO 2015 Pan Am Games.

– A new north-south orientation featuring a stunning view of the Niagara Escarpment – a landform internationally recognized by UNESCO – from every seat and broadcast location in the building;

– A flexible design with a total capacity of over 24,000 and the ability to expand to accommodate up to 40,000 for world class events, meeting CFL requirements for Grey Cup attendance;

– The best sightlines for football anywhere in North America;

– Enhanced comfort, with the highest standards of seat sizes of any outdoor facility in North America and dramatically expanded leg room;

– State-of-the-art technology, including a world class high definition video board providing flexible distribution of football content and statistics, hundreds of LED monitors placed throughout the building, plus a state of the art audio system delivering crisp, clear sound to every location within the facility;

– Premium amenities, featuring excellent, restaurant-quality concession areas, amongst the highest per-capita washroom-to-fan ratio of any facility in North America and a permanent ticketing and merchandise store on site;

– Superior entertaining options, including 30 private suites spanning the west side of the stadium, 700 club seats, a two-tiered end zone patio, and four hosting areas suitable for up to 100 persons each.

Fans can get all the details, see photos and take a high definition tour of the new facility by visiting NewStadiumNewExperience.com.

“In this year of the 100th Grey Cup game, we are thrilled to welcome this new jewel of a facility, at a location that has been home to so much football history,” said Mark Cohon, Commissioner of the Canadian Football League.

“This stadium project speaks to the Tiger-Cats’ important place in the history and culture of Hamilton and the surrounding area, and the team’s bright future in the decades ahead. It’s part of a stadium renaissance across the country, featuring new facilities in cities including Ottawa, Regina and Winnipeg, which is strengthening our league for the next 100 years.”

Young and Cohon praised the Province of Ontario, the Government of Canada, the City of Hamilton and TO2015 for working together to ensure the power of sport to unite and inspire as well as entertain will be stronger than ever here in the region.

“We are deeply grateful to everyone who has shown the leadership needed to make today possible, and we thank our fans and fellow residents most of all, for coming together to make this dream a reality,” Young said.

“This stadium honours every fan, every player, everyone who has been part of the Tiger-Cats tradition for more than 50 years, and those who were Tigers or Wildcats for 50 years before that. But what’s most exciting is the legacy it creates for our children and grandchildren, for the future of this community and the team which is so proud to represent it.”