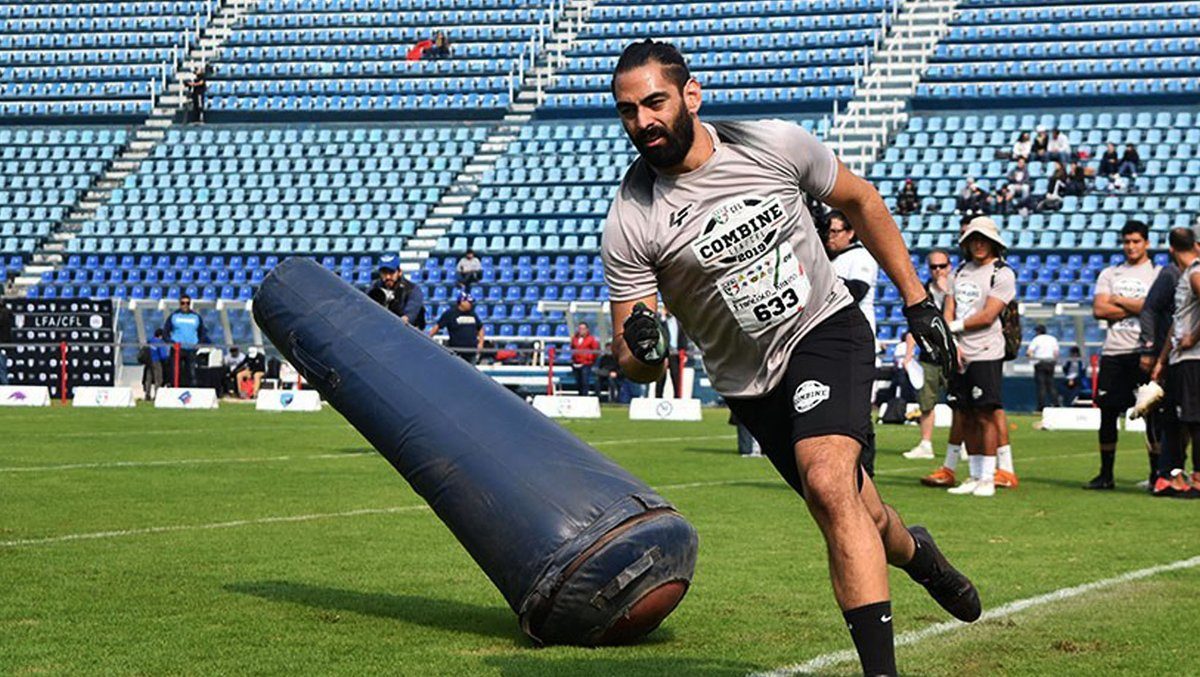 Throughout the weekend that marked the kickoff of the CFL and LFA’s partnership, Jose Alfonsin was hard to miss.

The 26-year-old’s bright red sweatshirt stood out at Saturday’s measurement session and on Sunday at the CFL and LFA’s combine. Emblazoned across the chest was the very distinct logo of the Calgary Colts.

The sweater was a far way from home — almost 4,500 kms — but it was comfortable on Alfonsin, who knows Calgary and Canadian football quiet well.

“I have friends over there,” he said after a long day of drills at Estadio Azul. “I stayed in Calgary for four months two years ago and I took a certification of personal trainer.”

Alfonsin has made a career as a personal trainer, coaching people by day and playing in the LFA as a defensive back for the Dinos Saltillo, in north Mexico. While his time in Canada was short, he made the most of it. After he got his personal trainer certification, he made a quick trip to Seattle for an open tryout with the BC Lions. He tries to use his football experiences to help other aspiring Mexican players chase their dreams. Sunday’s combine won’t be the last time he gets to work with CFL personnel. 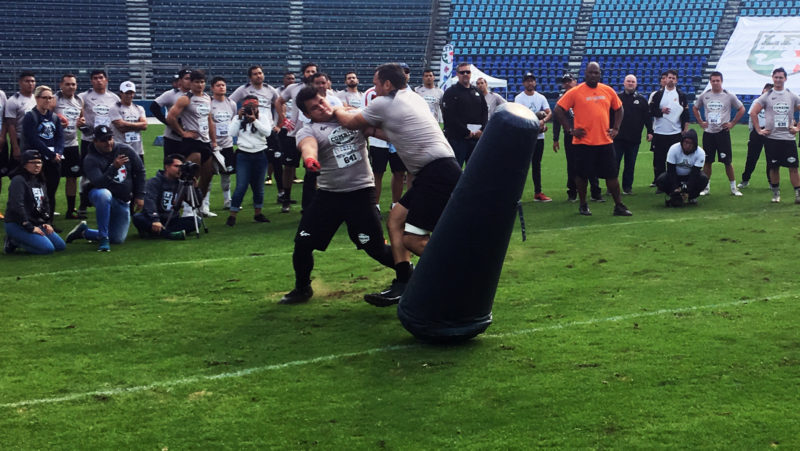 PLAYERS PARTICIPATED IN ONE-ON-ONE DRILLS IN FRONT OF SCOUTS AND GENERAL MANAGERS (CFL.CA)

Sunday, working with coaches, GMs and assistant GMs from across the CFL, he continued to learn.

“It’s very, very good. (Canadians are) great people. When I stayed over there it was beautiful. All the people that helped you…it’s amazing and here, the coaches all the teams, it’s a good opportunity. It’s a good experience from a player (standpoint and from a personal (standpoint).”

The GMs and coaches involved — at least two from each team in the league — went into Sunday’s combine with open minds. That’s largely because of the unknown. The league had never held a combine like this before and with film only showing so much, didn’t have a strong grasp of what kinds of players they’d be working with.

“I think we came in here with zero expectations in regards of what to expect. That’s not a negative,” Winnipeg Blue Bombers GM Kyle Walters said.

“(You’re) not sure what you’re getting into, but I think (the impression) started Saturday night with the reception. You could see the passion that the organizers of (the LFA) have. They care and they’re happy we’re here.

“The day ran very smooth. The talent was good. I was pleasantly surprised with what I saw. These kids competed and they laid it all on the line.”

This wasn’t a show-stopping haul of talent, but it was never expected to be that. TSN’s Dave Naylor noted that after talking with GMs and coaches through the day that there seemed to be six players on the field on Sunday that they thought could perform in a training camp.

Sunday was the first step in what the league hopes to be a mutually beneficial relationship with the LFA, where their best will get an opportunity to improve and where young Canadian players will get the option of having another door to walk through when the CFL’s closes on them.

“You try to approach it with an open mind,” BC Lions head coach DeVone Claybrooks said.

“You hope that you’re able to find something that’s able to develop long-term over the course of a year or two and in your practice roster that can develop into a player. Your end game and your end goal is to get a player to play and compete in the CFL at a high level and I think they’ve got a few guys here that are capable and have that potential.”

While Ottawa REDBLACKS general manager Marcel Desjardins was not on hand in Mexico City, he sent head coach Rick Campbell and offensive coordinator Jaime Elizondo in his place. Elizondo was a perfect fit for the day. Born in Mexico (his family moved to El Paso, TX when he was an infant), he’s fluent in Spanish and spent the day communicating to players in both languages.

“I thought the players were excited to be here, they showed some energy and the range of football was pretty broad,” he said.

Commissioner Randy Ambrosie has been vocal through this past week, starting at the team president and GM meetings in Mont Tremblant, about his goal to continue to grow partnerships like the one the CFL has established with the LFA. He’s targeting leagues in Europe next and told the Canadian Press on Sunday that in the coming weeks he’d meet with the leaders of the German football federation.

“What I keep talking with them about is that I’d love a chance to show their best players an opportunity to come to our great league and to give the Canadians a chance to see the best athletes from around the world that play football and I’m passionate about giving Canadian kids the chance to continue playing the game they love.”

At the conclusion of the combine on Sunday, Campbell said he saw continued growth in the future of the partnership.

“It just keeps growing. It becomes a bigger event, just like anything we do in the CFL. When we’ve put our minds to it and made it bigger it’s been good,” he said. “I think this has been a good experience.

“I thought it was really well-organized I thought they were all enthusiastic, everyone in Mexico City, they’re enthusiastic about this whole thing and I think it’s been a really positive experience the whole way around.”