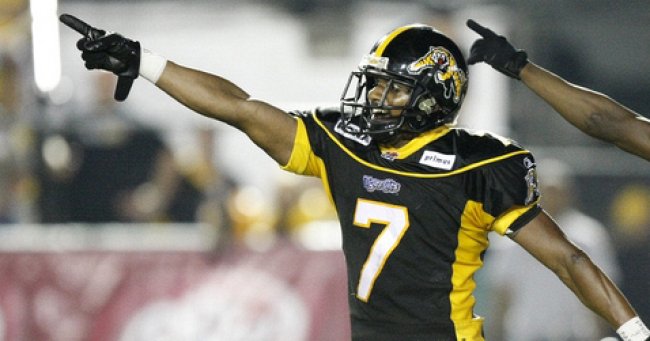 Of all the teams in the CFL, the Hamilton Tiger-Cats may be the team that has benefited most from the NFL’s recent roster cuts.

“To me this is just like getting a present for Christmas,” said Ticats defensive back Geoff Tisdale.

The gifts have been plentiful this week, as the Ticats signed former Arizona Cardinal Stevie Baggs and got Bo Smith back after he was released by the New York Jets.

Tisdale is one of many players that are eager to take their new toys out for a spin.

“I told Stevie that I’m going to want to see some floaters coming my way tomorrow,” said Tisdale.

Smith’s return means that Tisdale will return to his natural half back position, with Smith playing the corner, the same way the Ticats defence lined up last season.

After spending training camp with the Jets, Smith returns to the team that he played for the last two seasons.

“I’m just glad to be back with my family here in Hamilton,” said Smith, referring to his teammates.

“I had to take my shot at the NFL because that’s the dream I’ve always had, but it was nice to know that I could come back here and be with my boys again,” siad Smith.

Smith provided a physical presence over the last two seasons in Hamilton, contributing 39 tackles and two interceptions last season.
His familiarity with the defence means that he can come in and start right away, and capitalize on an already established chemistry with his teammates.

“Bo and I have a great chemistry on the field, where we can just play off of each other,” said Tisdale.

“Having him back just makes us that much better as a team,” he said.

And not a moment too soon.

With injuries to Jykine Bradley and Jason Shivers the team’s secondary could use a boost and Smith provides just that.

“I’m just so excited to be back here, helping the team build on what they’ve already done this season, I cant wait to get on the field Saturday,” said Smith.

Another reason that Smith’s return is excellent timing is their opponent this weekend.  The Saskatchewan Roughriders boast the league’s leading pass-attack and are coming off a thrilling overtime win against Calgary where quarterback Darian Durant was able to throw for 500 yards.