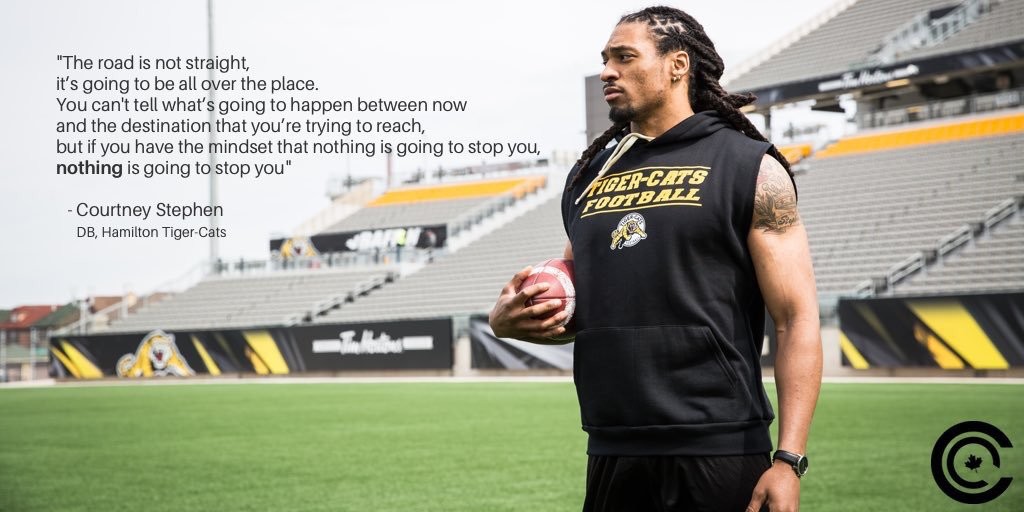 On the eve of the 104th Grey Cup Playoffs, the Canadian Football League (CFL) unveiled the nine players nominated for the distinguished Jake Gaudaur Veterans’ Award. The honour has been awarded every year since 2010 to a Canadian CFL player who best demonstrates the attributes of Canada’s veterans: strength, perseverance, courage, comradeship and contribution to Canadian communities. The award recognizes Jake Gaudaur as he embodied these attributes as the CFL’s longest-standing Commissioner and distinguished Second World War Veteran.

The nominees are chosen by their respective clubs and the recipient is chosen by a committee and honoured during the Shaw CFL Awards at Grey Cup Weekend. This year’s awards gathering will take place at the beautiful Art Gallery of Ontario in downtown Toronto.

Here is the list of the nine nominees for the 2016 CFL season:

Hunter Steward, BC Lions
Steward is well-respected by his teammates and fans for his perseverance through several injuries in his career. He also takes time to mentor young players on the team and off the field of play. He is a constant and proud Lions representative at various minor football events in and around the Vancouver area. Steward grew up on military bases across Canada and uses his memories of CFL players coming to spend time with him and other military families as inspiration to continue his community work.

Grant Shaw, Edmonton Eskimos
Shaw is the recipient of the David Boone Community Service Award. He has participated in more than 78 community appearances on behalf of the Eskimos, with more than 130 service hours this year alone. He is Edmonton’s TELUS WISE ambassador, educating youth on cyber-bullying and is also involved in the nationwide War Amps PLAYSAFE campaign. Shaw is also a guest coach for numerous local minor football teams, where he shares his expertise as a certified personal trainer.

Spencer Wilson, Calgary Stampeders
Wilson is the Stampeders’ team representative for several prominent community events including CUPS, a Calgary organization assisting Calgarians living in poverty or those who need assistance after traumatic events to become self-sufficient. He is also involved with Jump Rope for Heart to encourage kids to be active. Wilson has a strong connection to team-building and assisting the growth and success of the offensive line. Wilson was an apprentice in junior football (instead of university like most CFL players), and as an invited practice player had to work his way up the ranks. He is also an advocate for a variety of different charities.

Rob Bagg, Saskatchewan Roughriders
Bagg has returned from big injuries to be a key part of the Riders team and is a well-respected team leader in the locker room. He is involved with the Juvenile Diabetes Research Foundation – a foundation that he has a personal connection to, and one he hosts a fundraiser for in his hometown of Kingston, ON. Bagg launched the Gridiron Kings Youth Football Camp in Kingston back in 2014. He also takes part in the Riders’ Bleed Green campaign with Canadian Blood Services, and is the Riders’ You Can Play team representative.

Andrew Harris, Winnipeg Blue Bombers
Harris persevered for his football dreams as he worked full time while raising a child and playing junior football in Vancouver, and was invited to BC’s training camp where he worked his way up the ranks. He has organized social events to get closer to his new team in Winnipeg, and has also started a new charity initiative called Harris’ Heroes to host youth teams with game tickets and shirts, and spending time and mentoring youth. He also supports local football as a spectator and a mentor, as well as helping Winnipeg donate money to a local club who lost their equipment in a fire this past year.

Courtney Stephen, Hamilton Tiger-Cats
Stephen started his own football academy called the Overtime Football Club for about 50 students in 2015 and recruited other football players to work with youth to pursue post-secondary education and cultivate local talent in the offseason. He and a teammate started an extra after-hours film study group to build chemistry on the team. Stephen is the face of the GIVE LIFE movement with Canadian Blood Services and the Findlay Defensive Difference Makers program in support of the John Howard Society which helps integrate individuals back into society at the end of their sentence. He is also a part of the high school mentorship program, has made appearances with Be Fit assemblies, and threw a Back to School football camp for 30 under-privileged kids.

Matt Black, Toronto Argonauts
Black has a long history of involvement in the Huddle Up anti-bullying program speaking about his dyslexia growing up as an inner-city kid in the GTA. He is also the Argos’ Canadian Football League Players’ Association representative and a minor football volunteer at many events, including travelling to Atlantic Canada. Black is respected by his teammates, involved with Kids in the Zone where he meets kids after games, and volunteers with the Salvation Army at Thanksgiving. He’s also an ambassador for Canadian Blood Services and a passionate advocate of the White Ribbon Campaign, as well as the Argos’ Make the Call Gender-Based Violence Prevention Project.

Nolan MacMillan, Ottawa REDBLACKS
MacMillan worked hard this past year rehabbing a wrist injury to be able to jump back into the REDBLACKS’ lineup late in the season. He led his entire team in number of hours spent working in the Ottawa community: MacMillan has served meals to the homeless, and he was a minor football guest coach with several organizations. He also participated in various school assemblies, engaging and mentoring youth around Ottawa.

Luc Brodeur-Jourdain, Montreal Alouettes
Brodeur-Jourdain is incredibly team-focused and showed a tremendous amount of sacrifice and perseverance on behalf of the Alouettes. He also demonstrated his courage by finishing a game with a torn ACL and MCL and vowed to come back stronger, which he did, in a shorter amount of time than doctors had predicted. He once raced across town for a game after his son was born prematurely. He works with the Together at School Alouettes program to visit with thousands of kids and deliver the message of staying in school. He is also involved with the Mira Foundation, which partners disabled individuals with trained dogs. Brodeur-Jourdain also purchases his game jerseys and donates them to various local Montreal charities.

This year’s Jake Gaudaur Veterans’ Award will be honoured during the Shaw CFL Awards on Thursday November 24th at Grey Cup Weekend in Toronto.