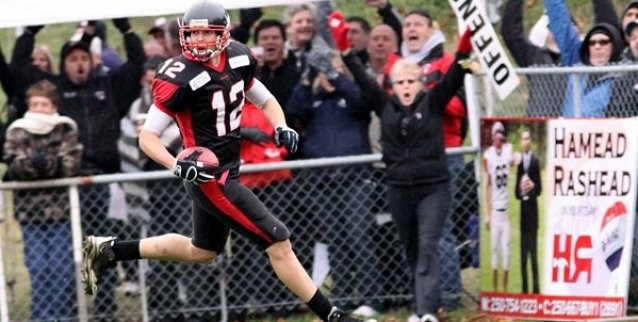 The path less travelled: From CJFL to CFL
September 18, 2015 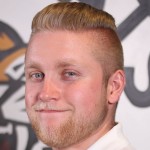 When one envisions the path to professional football in Canada, they typically picture the star high school player who is wooed by numerous NCAA colleges or CIS universities in hopes of adding his talents to their team.

The player chooses the school that suits their needs the best, and they play there for four years, before entering the CFL Draft at the conclusion of their final season.

But for some kids– whether they’re recruited heavily or not at all– post-secondary school is not the ideal environment or path for them. For some high school grads, the path to professional football can’t travel through lectures, seminars and Scantron tests, and that is where the Canadian Junior Football League enters the picture.

“People get to the CFL level by playing football at college or university in the States or Canada,” starts Hamilton Hurricanes president Mike Samuel, “but there’s a lot of talented football players who for whatever reason don’t have the marks to get into CIS football, don’t have the finances to go to school, or university just isn’t for them.”

The Canadian Junior Football League is where young men who are not enrolled in CIS university or NCAA college can continue to play football at a highly competitive level, rather than giving up the game that they love.

“It gives a lot of kids that aren’t going to go to university a chance,” says Ticats receiver Robin Medeiros. “Junior football gives the opportunity to play football to the guys that want to be an electrician, plumber or any other trade.”

Medeiros, a three-year CFL veteran who played for multiple CJFL teams, originally ventured down the prototypical CIS football path, under the impression that it was the only way to continue football past high school. After a year at Bishop’s University, however, Medeiros decided that university was not the place for him.

“I did what everyone said, and when I got there it wasn’t really for me,” explains Medeiros. “I wanted to work, I wanted to learn to work, so I went home an the junior program was already there for me to continue to play.”

The league, established in its’ present form in 1974 but in existence since 1908, features 20 teams across the country. The teams compete in three conferences that span six Canadian provinces, all of which compete for the Canadian Bowl, Canada’s oldest national football championship. The Hurricanes, Hamilton’s hometown CJFL team, and Medeiros’ Burlington Braves both play in the Ontario Football Conference (OFC).

Following his 2008 Canadian championship season with the Braves, Medeiros transitioned to to the BCFC (British Columbia Football Conference) and joined the team the Braves defeated in the bowl game, the Vancouver Island Raiders.

“That’s one of the little things about junior that’s a little different than the CIS,” explains Medeiros, “you can go where you want a little bit more.”

The 2009 Raiders, featuring current BC Lions outstanding running back Andrew Harris, went undefeated and won the national championship, giving Medeiros back-to-back titles. Harris, the CFL-leader in yards from scrimmage in 2015, is undoubtedly one of the CJFL’s premier success stories, but he is not the only one.

Ticats receiver Matt Coates was a member of the Hamilton Hurricanes for two seasons prior to transitioning to the CFL, marking the 13th time such a transition has happened from Hamilton’s CJFL team to their CFL counterpart.

“I’ve grown up in Hamilton, and I played CIS and junior football,” said Hurricanes coach Jason Hayes. “A player’s a player. It doesn’t matter the path that gets you there, it’s the work you put in to get to the highest level.”

Along with acting as an avenue to the CFL, the CJFL itself acts as a highly-competitive league that provides great entertainment value. The teams provide their players with a near-professional experience, while operating on a not-for-profit agenda.

The CJFL is often overlooked, but as more former players make their mark in the pros and more initiatives like Saturday’s doubleheader provide exposure for the league, the high-quality football will be harder to ignore.

“I think it’s great that we’re giving these teams recognition and bringing them out here,” says Medeiros. “We’ll have fans watching and realizing that it’s good football and the athletes are equivalent to the CIS players.”

Stay in your seats following Saturday’s Ticats and Eskimos game to catch all of the CJFL action between the Hurricanes and Braves and show support for Canada’s premier semi-professional football league.