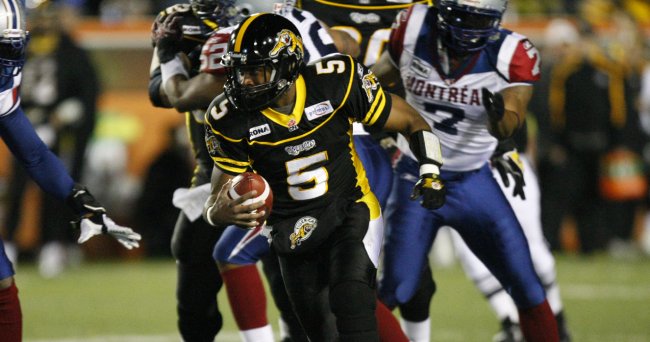 When the Montreal Alouettes come rolling into Ivor Wynne Stadium on Wednesday, there will be a plethora of veteran Ticats who will take the field for the first time in 2011.

“More then half our starters haven’t played a down yet, so I want to make sure they get their time and get back into game-mode,” head coach Marcel Bellefeuille said after a light walk through practice at Ivor Wynne on Tuesday. “Will give all the vets pretty much a half and in the second half, we have a number of players we need to look at still.”

Even though the 2011 regular season is right around the corner, there are still many decisions to be made in shaping the Ticats roster.

“We want to make sure that we use the second half to evaluate the younger players, there is still a number of battles going on and decisions to be made, so the second half will be crucial to that,” Bellefeuille said. “There are a few positions where we’re potentially considering going with rookies, but that depends on their performance.”

It looks like their could still be some depth chart movement in the defensive secondary, and defensive back Darren Toney is looking to lock down a starting job at the weak side halfback position.

“I have to tone in on my keys and stay disciplined. They’re looking for somebody to play hard and be technically sound every snap,” he said.

Toney played a lot of man-to-man coverage during his college career at Arkansas State. He believes the new aggressive defensive scheme fits his skill set very well and the one-time B.C. Lion knows how important game action can be to help the secondary play as one.

With all of the defensive starters slated to play a half against Montreal, Bellefeuille knows what he would like to see out of his first string unit.

On the other side of the football, entrenched starting quarterback Kevin Glenn is anxious to suit up for the first time, and what better way to start then versus the Alouettes.

“Bringing Montreal over will be some good competition. Those guys won the Grey Cup last year so it will be a good test for us,” he said. “Execute and score points, if we do that everything will take care of itself.”

Glenn’s bench boss knows exactly what he would like to see out of his starting pivot.

“I want to see the timing, he has worked with a lot of different receivers in training camp,” Bellefeuille said. “I want to make sure his reads are crisp, the ball is coming out on time and that he is seeing the field.”

Glenn is slated to play the entire first half, while Quinton Porter will see the bulk of the action in the second half and third string quarterback Jason Boltus could see some mop up to duty.

The trio of pivots have thrown to many new receivers in training camp and Glenn feels the chemistry is ready for display under the lights.

“Having OTA’s and rookie camp, quarterbacks being at rookie camp, it gave us a chance to get involved with the younger receivers and have a chance for them to learn us and us to learn them,” he said.

As the young pass catchers vie for a roster spot, Glenn believes the intensity in the pre-season is never lacking because players, at every position, are battling to put themselves in the opening day lineup.

“Pre-season is always intense because you got guys out here fighting for jobs,” he said “This is the game that determines whether or not some guys stay, or some guys go.”