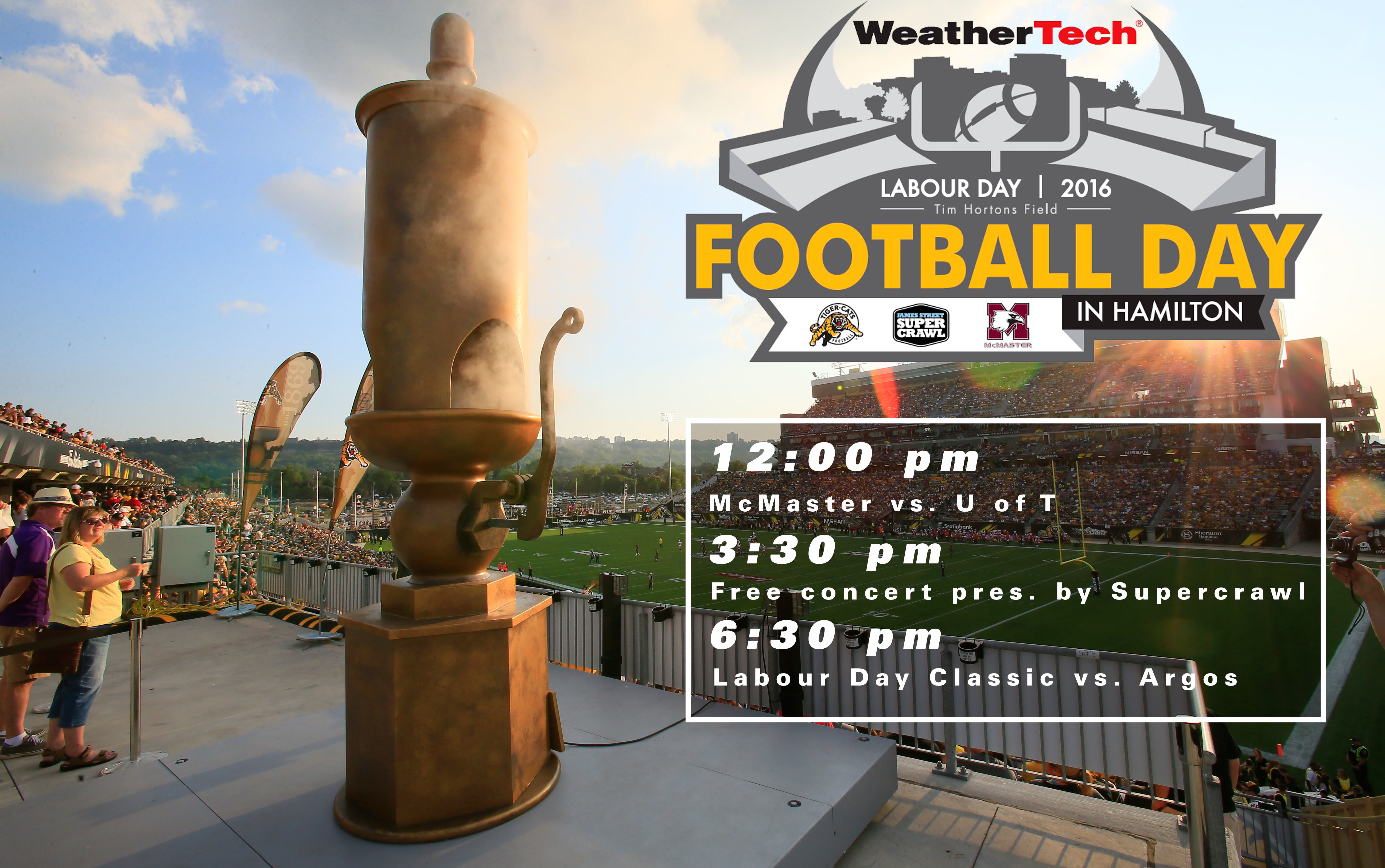 When the 2016 CFL schedule was released in February, the Hamilton Tiger-Cats announced that the Labour Day Classic will be moving to prime time as part of their plans to deliver a day-long experience for fans to celebrate the league’s marquee regular season game. The team confirmed those details Tuesday with the unveiling of WeatherTech Football Day in Hamilton.

WeatherTech Football Day in Hamilton will deliver a double-header with the Hamilton Tiger-Cats and the McMaster Marauders bookending a day-long celebration with matchups against each team’s Toronto rival. In between games, fans will be treated to a free admission and Hamilton-artist-lead concert in the South Plaza. The free concert event will be delivered by the producers of Supercrawl, Hamilton’s largest annual music and arts festival and the 2015 Ontario Tourism Event of the Year. The day will culminate in prime time when the Tiger-Cats and Toronto Argonauts renew the oldest rivalry in professional sports.

Throughout the day, the CFL on TSN panel will broadcast live from Tim Hortons Field for the first time ever. The CFL on TSN Mark’s Labour Day Weekend broadcast from the South Plaza will include pre-game, halftime and between game coverage for both Labour Day CFL games from Calgary and Hamilton.

“The Tiger-Cats are proud to partner with WeatherTech, McMaster, Supercrawl and TSN in this celebration of Hamilton and football. The spirit of WeatherTech Football Day in Hamilton is to unite sports fans in our community, to share our love for the game and our City, and to deliver the ultimate experience for our fans,” said Matt Afinec, Chief Commercial Officer of the Tiger-Cats.

“Hamilton is a football town, and working with the Tiger-Cats to put together a gameday at Tim Hortons Field full of entertaining events for the fans is exciting,” said Glen Grunwald, McMaster University’s Director of Athletics & Recreation. “This is a truly unique experience for our students, student-athletes and alumni.”

Following the Marauders game, fans will exit the stadium to enjoy a free admission concert, delivered by Supercrawl, in the South Plaza. The concert will feature multiple acts to be announced in the coming months. The South Plaza at Tim Hortons Field is a fully licensed area, and food and drink will be available for purchase between games.

“We are excited to give fans a taste of the Supercrawl experience at Tim Hortons Field just one week in advance of our 2016 event,” said Tim Potocic, founder of Supercrawl, which opens its 2016 edition on September 9. “Labour Day in Hamilton has always been a one of a kind experience, and we’re proud to play a role in helping to take it to the next level.”

Stadium gates will reopen at 5 p.m. with the annual Labour Day Classic matchup featuring the Tiger-Cats and Argonauts kicking off at 6:30 p.m.

To reserve tickets, season seat holders can go to www.ticats.ca/FootballDay and enter their Name, MyTix Account ID#, and number of tickets to be reserved or by calling 905-547-2287.

For all other fans that would like to secure their tickets to both WeatherTech Football Day in Hamilton games in advance of the public on-sale date, Hamilton Tiger-Cats Flex Packs are now available. The McMaster game is included in the Labour Day Classic ticket price for all flex packs, group tickets and single-game tickets.  Hamilton Tiger-Cats season seats, flex packs and group tickets are available online at www.ticats.ca/tickets or by calling 905-547-2287.

2021 CFL Draft
BEYOND THE HEADLINES: 12 NOTES FROM THE CFL DRAFT
7 hours ago