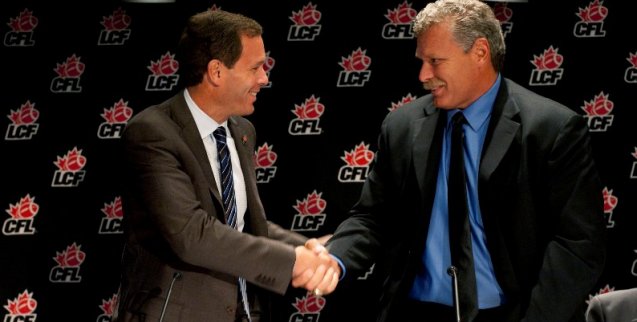 Working to promote concussion awareness
May 3, 2011

TORONTO — From pee wee to the pros, Canadian football is taking a leadership role when it comes to promoting concussion awareness, prevention, management and research.

At the centre of the sport’s efforts is a new campaign that aims to distribute simple-to-follow “concussion flyers” and posters to hundreds of thousands of athletes and coaches across the country.

The flyers and posters spell out how to recognize the symptoms of a concussion and stress the importance of not rushing an athlete with any symptoms back into action.

“Our goal is to ensure this basic but all important information is on every coach’s clipboard, posted in every team’s locker room, and available to every player and parent,” Mark Cohon, Commissioner of the Canadian Football League, told a news conference today.

“We all share a real and profound concern and respect for our athletes and their well-being, whether that athlete is a youngster proud to wear football pads for the very first time or a CFL veteran competing for the Grey Cup.”

The goal of the new campaign is to distribute the concussion flyers and posters – on paper and electronically – to more than 100,000 kids playing minor football, 3,200 high schools with 750,000 athletes playing football and other sports, and 52 universities with 2,000 football players and 8,500 other student-athletes.

“We know football isn’t in this alone, and that concussions affect every sport, as well as people in everyday life,” Cohon said.

“But our sport, with a long and proud history in Canada, is an integral part of the fabric of this nation, so we feel a special obligation to learn all we can, and lead whenever and wherever we can.”

Dr. Tator praised the football community, and the CFL in particular, for supporting prevention and ongoing research.

He urged parents, coaches and players to understand the signs and symptoms of concussion, including confusion, dizziness and fuzzy vision, to ensure an athlete never returns to play while symptomatic, and that they follow a very careful and gradual, medically supervised step-by-step protocol before returning an athlete to play.

Tator also called on governments and the public to help fund the KNC Sports Concussion Project, a Canadian study into the possible link between repeated concussions and late deterioration of brain function, now being led by some of the country’s leading experts.

“CFL alumni support this research and have been working actively with Dr. Tator and his team, finding brain donors and contributing to the research committee,” said Leo Ezerins, Executive-Director of the Canadian Football League Alumni Association.

“We’re working to make the game safer through the sharing of best practices. Our guys want to do what they can to give back to the game that gave us so much.”

One by one, representatives of football at every level, outlined initiatives designed to promote awareness, increase diagnosis, and improve management of concussions. Those include:

• CFL team physicians and therapists use an internationally recognized medical protocol, known as SCAT2, for diagnosing concussions and withholding athletes from play until they have been properly cleared to participate.

• All player concussion assessments in the CFL are left solely in the hands of team physicians and therapist.

• All CFL coaches and players will receive educational material to aid in recognizing signs and symptoms of a concussion.

• Administrators from all levels of football report  a pronounced change in “culture” from the expectation that a player “get back in there” to one that encourages players to be honest about symptoms and coaches to err on the side of extreme caution.

• Certification programs that teach coaches how to recognize the symptoms of concussions.

• Training programs for coaches that emphasize that players should never use their helmets as weapons or lead with their heads when blocking or tackling.

• A new rule in the amateur football rule book that requires officials to report suspected concussed players to the coaching or medical staff during games.

“Our athletes are students first, and a failure to recognize a concussion or handle it properly, can put success in the classroom in jeopardy,” said Marg McGregor, Chief Executive Officer of CIS. “Fortunately, the old days when an athlete ‘had his bell rung” and was told to suck it up and get back on the field are behind us. But more needs to be done.”

The CFLPA is squarely focused on player safety, and concussions in particular, said Bryan Crawford, the player representative with the Toronto Argonauts.

“Like many sports, football involves an element of risk,” Crawford said. “But we’re working with our league and football across Canada to draw a clear line between the risk we accept as athletes and reckless and irresponsible behaviour that endangers players.”

Concussion awareness and management is embedded in the National Coaching Certification program at all levels of amateur football, said Rick Sowieta, Director of Sport with Football Canada.

“But we have partnered with the CFL on this campaign because we have to do all we can to ensure every coach, parent and athlete has the information they need,” he said.

The Canadian School Sport Federation will work with provincial and territorial organizations to distribute the concussion cards and posters to high schools across Canada, including all 860 secondary schools in Ontario, said Doug Gellatly, the federation’s president.

“Our primary concern is for the safety of participants in all sports, not just football,” said Gellaty, who is also Executive Director of the Ontario Federation of Athletic Associations (OFSAA).

The news conference was emceed by Matt Dunigan, CFL on TSN host, a member of the CFL Alumni Association, and a new spokesman for ThinkFirst.

“Football is a great teacher of values such as teamwork, perseverance and leadership,” said Canadian Football Hall of Fame quarterback Dunigan, who suffered numerous concussions during his 14 years in the CFL.

“But perseverance should never be confused with bad judgment, and true leadership understands there is more to the sport and life than the next play. So be a great teammate: ThinkFirst…”

video videos
April 13: Mike Walker and Louie B.
15 hours ago

video videos
April 13: Orlondo Steinauer and Louie B.
16 hours ago 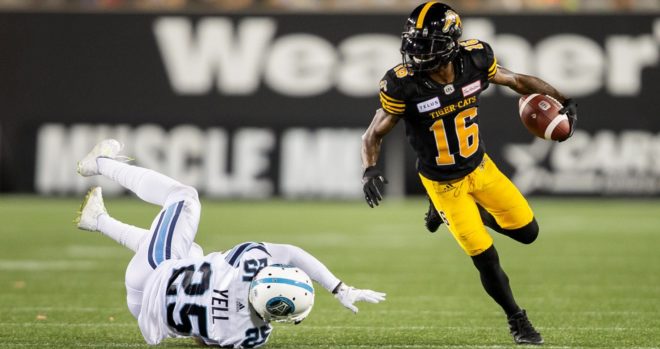 video videos
April 1: C.J. Gable and Louie B.
2 weeks ago